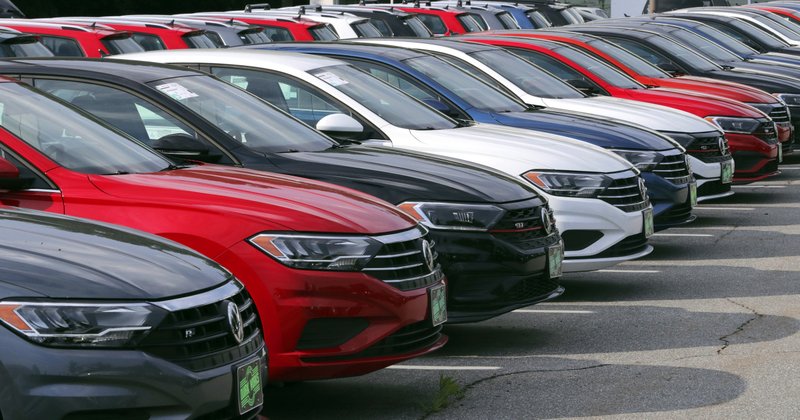 In this July 10, 2019, photo Volkswagen Jetta sedans are lined up at the Quirk dealership in Manchester, N.H. On Tuesday, July 16, the Commerce Department releases U.S. retail sales data for June. (AP Photo/Charles Krupa)

WASHINGTON -- U.S. retail sales rose at a solid pace last month, providing support to the economy at a time when other drivers of growth have faded.

The Commerce Department said Tuesday that retail sales rose 0.4% in June, the fourth-straight increase. Sales at online retailers, grocery stores, home and garden stores, and restaurants and bars all increased at a healthy pace.

June's figures underscore the importance of consumer spending to the U.S. economy. Business investment has weakened, factory output has faltered, and slower global growth is weighing on exports. But measures of consumer confidence remain historically high, and June's retail-sales figures suggest that consumer spending, which drives two-thirds of the economy, remains strong.

"The onus falls on American consumers to drive economic growth," Ksenia Bushmeneva, an economist at TD Economics, said in a research note. "It seems that they are up to this task."

Retail sales account for about one-third of Americans' spending, while the other two-thirds are in services.

Nonstore retailers such as Amazon.com accounted for 12.45% of the national retail spending in June -- ahead of the 12.44% going to grocery stores, and 12.41% at restaurants and bars.

It was the first time that nonstore retailers had grabbed the No. 2 ranking among the 13 categories the Commerce Department data are broken into. Vehicles and auto-parts stores continued to account for the biggest chunk of U.S. spending, at about 20%.

After seasonal adjustment, Americans spent $64.7 billion at nonstore retailers in June. The category contributed about half of the overall 0.4% rise.

So far, consumer spending has remained healthy despite the hefty tariffs imposed on billions of dollars of imports as part of President Donald Trump's trade disputes. Consumers are also defying, for now, fears that their spending would decline as the effects of Trump's tax cuts wane.

"The retail-sales data today gives you comfort that the domestic economy is in good shape and the consumer is in a good spot," said Michael Gapen, chief U.S. economist at Barclays. "Business spending, business confidence and manufacturing production are where the economy is slowing, and if the Fed is looking to insulate the economy, some cuts to support financial-market conditions and keep the domestic economy strong is still a reasonable response."

Yields on the 10-year Treasury note rose Tuesday and the dollar advanced after the report, though traders maintained bets that the central bank will lower borrowing costs at least a quarter percentage point later this month.

The retail-sales gain "feeds into the narrative we've been seeing, which is consumer strength continuing to support the economy with a strong labor market and wage growth," said Scott Brown, chief economist at Raymond James Financial Inc. "It's consistent with consumer spending supporting the overall economy, but part of the strength we're seeing in the second-quarter numbers is payback because the first quarter was so soft."

The rebound underscores Federal Reserve Chairman Jerome Powell's view that consumer spending and finances remain healthy amid a tight labor market that's been supporting the expansion. Strength at retailers may also complicate the debate for Fed policymakers as they gather July 30-31 to chart their course amid head winds such as slowing global growth and trade tensions.

Powell in congressional testimony last week left little doubt that the Fed is poised to cut rates for the first time in a decade. Still, he told lawmakers that consumer spending has reliably driven growth and rebounded to a solid pace after first-quarter weakness.

The initial reading of second-quarter gross domestic product is due July 26. A survey this month showed growth probably slowed to a 1.8% annualized pace from 3.1%, though consumption was seen picking up.

Information for this article was contributed by Christopher Rugaber of The Associated Press; and by Alex Tanzi, Reade Pickert and Katia Dmitrieva of Bloomberg News.