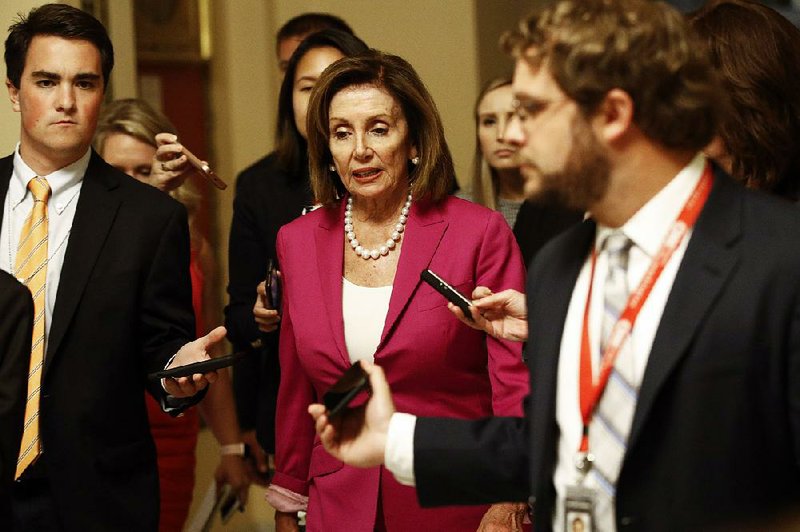 WASHINGTON -- The Democratic-led U.S. House voted Tuesday to condemn President Donald Trump's "racist comments" against four female lawmakers, despite protestations by Trump's Republican congressional allies and his own insistence that he hasn't "a racist bone in my body."

The measure passed nearly along party lines, 240-187. Four Republicans and the House's lone independent, Rep. Justin Amash of Michigan, voted with all Democrats to condemn Trump.

All four members of Arkansas' delegation voted against the measure.

Some Republicans defended Trump: "What has really happened here is that the president and his supporters have been forced to endure months of allegations of racism," said Rep. Dan Meuser, R-Pa. "This ridiculous slander does a disservice to our nation."

The nonbinding resolution calls Trump's tweets "racist comments that have legitimized increased fear and hatred of new Americans and people of color." Republicans voted en masse against the measure, which was the Democrats' response to Trump's attacks on Reps. Alexandria Ocasio-Cortez of New York, Ilhan Omar of Minnesota, Ayanna Pressley of Massachusetts and Rashida Tlaib of Michigan, who he said should "go back" to their countries. All were born in the U.S. except for Omar, who came to the U.S. as a child after fleeing Somalia with her family.

The four freshmen on Tuesday backed Rep. Steven Cohen of Tennessee in unsuccessfully seeking a House vote on a harsher censure of Trump's tweets. And Rep. Al Green of Texas filed articles of impeachment against Trump in an effort to force a House vote -- a move he's tried in the past but lost, earning opposition from most Democrats.

"There's no excuse for any response to those words but a swift and strong, unified condemnation," House Speaker Nancy Pelosi said as the House debated the resolution. "Every single member of this institution, Democratic and Republican, should join us in condemning the president's racist tweets."

As Republicans rose to protest, Pelosi turned toward them on the House floor and added, "To do anything less would be a shocking rejection of our values and a shameful abdication of our oath of office to protect the American people."

Rep. Doug Collins of Georgia, the top Republican on the Judiciary Committee, made a formal objection to the remarks, claiming that they had violated the rules of decorum in the House, which call for lawmakers to avoid impugning the motives of their colleagues or the president.

After a delay exceeding 90 minutes, No. 2 House Democrat Steny Hoyer of Maryland said Pelosi had indeed violated a House rule against characterizing an action as racist. Hoyer was presiding after Rep. Emanuel Cleaver of Missouri stormed away from the presiding officer's chair, lamenting, "We want to just fight," apparently aimed at Republicans. Even so, the House voted afterward along party lines to leave Pelosi's words intact in the record.

Trump on Tuesday denied that his tweets were racist and implored House Republicans to reject the measure. The president pushed back against the resolution on Twitter.

"Those Tweets were NOT Racist," Trump wrote. "I don't have a Racist bone in my body! The so-called vote to be taken is a Democrat con game. Republicans should not show 'weakness' and fall into their trap."

"You're right, Mr. President -- you don't have a racist bone in your body. You have a racist mind in your head and a racist heart in your chest," she tweeted.

Later at the White House, the president did not back away from his original comment, saying of the for women, "they can leave."

Earlier Tuesday, at a private meeting of House Democrats, Pelosi set the stage for the debate, calling the four freshman lawmakers "our sisters," and saying the insults to which Trump subjected them echo hurtful and offensive remarks he makes every day.

"So this is a resolution based in who we are as a people, as well as a recognition of the unacceptability of what his goals were," Pelosi told Democrats, according to an aide present for the private meeting who described her remarks on condition of anonymity. "This is, I hope, one where we will get Republican support. If they can't support condemning the words of the president, well, that's a message in and of itself."

Some Republicans have denounced the president's comments, including Massachusetts Gov. Charlie Baker. Trump's comments "were shameful, they were racist," he told WBUR in Boston, "and they bring a tremendous amount of, sort of, disgrace to public policy and public life, and I condemn them all."

But Rep. Ralph Abraham, R-La., on Monday tweeted that he would pay for the four lawmakers to leave the country, adding that they've said anti-American and anti-Semitic things.

"I'll pay for their tickets out of this country if they just tell me where they'd rather be," he tweeted.

Earlier, Trump attempted to shift the focus to what he called "HORRIBLE" things said by the four liberal freshmen lawmakers.

"This should be a vote on the filthy language, statements and lies told by the Democrat Congresswomen, who I truly believe, based on their actions, hate our Country," Trump wrote.

Sen. Mitch McConnell, R-Ky., the majority leader, said lawmakers from all ends of the political spectrum should dial back their rhetoric, saying, "everybody ought to tone it down," but he did not take issue with the president, telling reporters who asked whether his tweets were racist, "The president's not a racist."

McConnell also called on leaders "from the president to the speaker to the freshman members of the House" to attack ideas, not the people who espouse them.

"There's been a consensus that political rhetoric has gotten way, way heated across the political spectrum," he said.

At the Senate Republicans' weekly lunch Tuesday, Trump's tweets came up, and some lawmakers were finding the situation irksome, participants said. Many want the 2020 campaigns to focus on progressive Democrats' demands for government-provided health care, abolishing the federal Immigration and Customs Enforcement agency and other hard-left policies.

"Those ideas give us so much material to work with, and it takes away from our time to talk about it," Sen. Mike Braun of Indiana said of Trump's tweets.

Information for this article was contributed by Julie Hirschfeld Davis of The New York Times; and by Alan Fram, Darlene Superville, Jill Colvin, Zeke Miller, Jonathan Lemire, Lisa Mascaro and staff members of The Associated Press. 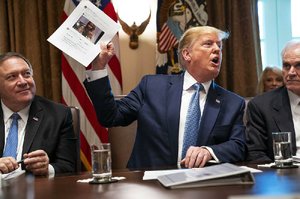 Photo by The New York Times/DOUG MILL
President Donald Trump waves a photo of Rep. Ilhan Omar, D-Minn., during a Cabinet meeting Tuesday at the White House. Omar is one of the four freshman Democratic lawmakers singled out in tweets by the president. 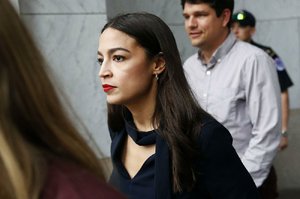 Photo by AP/PATRICK SEMANSKY
Rep. Alexandria Ocasio-Cortez walks through Capitol Hill on Tuesday. Responding on Twitter to President Donald Trump’s tweeted assertion that he doesn’t have “a Racist bone in my body,” Ocasio-Cortez tweeted: “You’re right, Mr. President — you don’t have a racist bone in your body. You have a racist mind in your head and a racist heart in your chest.” 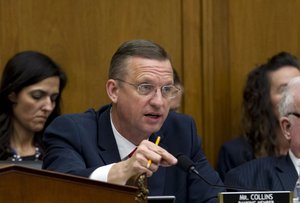