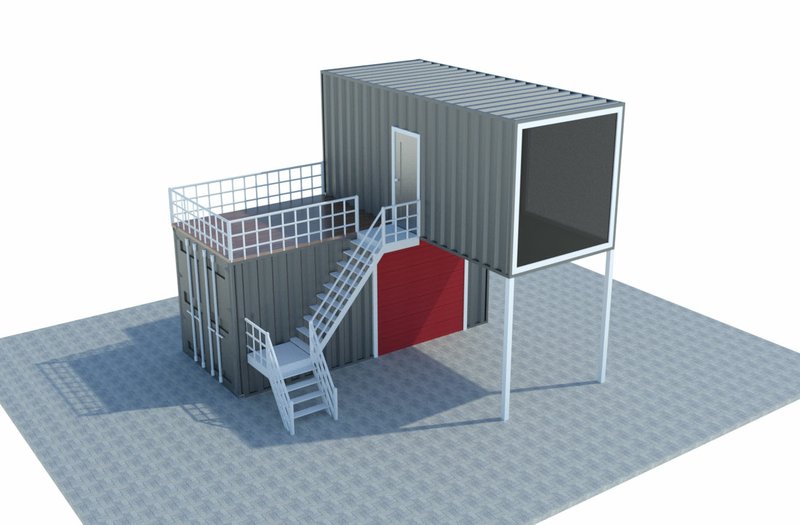 BENTONVILLE -- The Planning Commission approved a concept Tuesday that may change the way buildings are developed in the city.

The commission voted 5-0 to approve a permit for Spoke Adventures, 211 N.E. A St., to operate out of specially designed shipping containers.

Jim Grider and Richard Binns were absent from the meeting.

The business would be unique, as it would use shipping containers as an operational space in Bentonville, said Jesse Hull, Spoke Adventures co-owner.

"It's exciting," he said. "If we can do it right and set the right example, we can change the way new businesses are opened down here."

The business is co-owned by Hull, Barry Furuseth and Paul Juozaitis, who have been running the bike rental business out of a trailer just off Lawrence Plaza since May 10, Hull said.

The business was operating on a permanent permit, received a conditional permit to operate out of the shipping containers and will once again be approved for a permanent permit for the life of the business if the concept proves to be complementary to the city's development after one year, Juozaitis said.

It's unclear how or if the project will cause changes to the city's development procedures because the project is so preliminary, said Jon Stanley, senior planner, on Friday.

The concept took some time and tweaking for city planners to see the shipping container plan as a potential good fit for downtown Bentonville, Hull said.

"I think it took that team out of their comfort zone when we first met with them," Hull said, explaining the shipping containers wouldn't be as portable as others in the downtown district.

Hull said many businesses operate out of trailers simply be hooked up to a vehicle and moved to another location, just like the trailer Spoke Adventures is operating from.

The shipping containers are portable as well and can be moved within a day, Hull said.

City planners worked with the business owners to see how they could make the shipping container concept work within the city's development policies, he said.

"This is the first time I've really learned the importance of what they're doing down here and why they have rules," Hull said of the Planning Commission. "What's the best outcome for Bentonville is the end goal."

Construction of the business' new space will begin Monday, and the business will be up and running again in two or three weeks, Juozaitis said.

The containers should take no more than a half a day to assemble on site, Hull said.

The trailer is 110 square feet, he said. Two shipping containers will be stacked one on top of the other to form a new L-shaped operational space of 250 square feet.

Hull said the trend for businesses to operate out of shipping containers is catching on globally, and he discovered the concept on a visit to Copenhagen.

Don Johnston is the engineer who'll be helping construct the project and ensure the structural integrity of the containers in Bentonville. He said the trend for businesses operating out of shipping containers is beginning to catch on in America.

"I see a lot more of them in the states," Johnston said, adding he's helped with similar projects in Rogers, Haiti, Mexico, Guatemala and Belize.

The concept allows businesses to purchase containers for far less than the cost of completing brick and mortar construction, he said, and provides the flexibility for owners to make the trailers look however they see fit.

Operating out of office space built from shipping containers may cause neighboring businesses to have concerns about what the business may look like, but Juozaitis said the containers will have a modern and professional look with a large, glass window facing the street and a black matte finish.

"If we put one in downtown Bentonville that's a really cool store like you'd see in Seattle, not only are people going to want to come see what's inside, you're going to start something other businesses may want to do," Hull said.