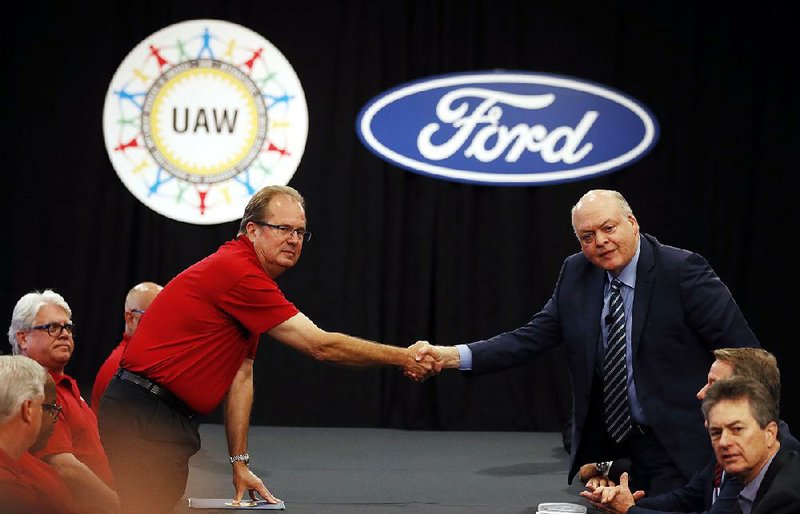 DEARBORN, Mich. -- Contract talks between the United Auto Workers and Detroit's three automakers kicked off with the union president departing from the traditionally friendly tone by telling Ford executives that workers want a bigger share of the companies' record profits.

While Ford executives talked often about working together at a ceremony Monday, UAW President Gary Jones emphasized that he wants to end concessions and the companies outsourcing jobs to countries with lower-cost labor.

"We will protect our work, our jobs and our way of life," Jones said. "We expect an agreement that recognizes our contributions."

Bargaining over new four-year contracts between the Detroit automakers and the union representing 142,000 workers nationwide started Monday with a ceremonial handshake at Ford's Dearborn headquarters.

The two sides have been at relative peace during recent good times, but that could change as auto sales and profits begin to slow, health care costs rise and a labor cost gap widens with workers at foreign-owned assembly plants in the South.

Bill Dirksen, Ford's chief negotiator, tried to return to a more cooperative tone Monday, noting that there will be differences between the company and union.

"It's up to us to figure out those solutions, and I think we can do it."

"We've had a 10-year run of strong economics in the U.S. -- that doesn't stay on forever," Joe Hinrichs, Ford's automotive president, told reporters Monday. "We need to maintain a competitiveness and a negotiations process that gives us a way to be competitive in any economic cycle."

That's a sentiment Jones doesn't want to hear. "Despite record profits, labor is still being asked to take concessions," he said. "Our jobs have been outsourced to companies paying lower wages in the United States, Mexico, China and all over the world. This must stop."

Talks with General Motors and Fiat Chrysler will begin today. The union's four-year contract with all three expires Sept. 14.

Most of the union's goals are gains in health care, job security, plant investment, product commitments, wages, pensions and pushing back on hiring temporary workers -- but Jones has also laid out other priorities, such as dealing with opioid addiction and workplace violence.

The companies want to limit rising employee health care costs -- one analyst called health care a lightning rod issue -- and maintain a wage and benefit structure that does not put them at an increasing disadvantage against so-called transplant automakers, such as Toyota, Honda and Nissan. "International" companies had projected average hourly labor costs in 2019 of $50, compared with $55 for Fiat Chrysler, $61 for Ford and $63 for GM UAW workers, according to data from the Center for Automotive Research.

GM's decision to cut off any future product from car and powertrain plants in Michigan, Ohio and Maryland incensed the UAW and made the company a target of criticism from President Donald Trump, Democratic candidates and members of Congress.

United Auto Workers Vice President Terry Dittes, head of the union's GM department, has said those plants "will not be forgotten" and hopes to secure work for members at every one of the facilities. It will be an uphill climb, especially with GM's shuttered Chevrolet Cruze plant in Lordstown, Ohio, which it's trying to sell to electric-truck maker Workhorse Group Inc.

The union has less of a beef on this front with Fiat Chrysler, which is planning to hire 6,500 workers to increase Jeep SUV and Ram truck output, and Ford, which is currying favor with big investments to build electric and self-driving vehicles in Michigan. But the union is still going to battle for whatever job security measures it can secure for other factories even though the U.S. auto market is shrinking.

The Detroit automakers were able to offset some of the additional labor cost added by handing out raises during the last round of contracts in 2015 by convincing the UAW to let them employ more temporary workers. These arrangements are helpful when the companies need extra help to launch a new model or cover summer vacation schedules.

Union members were insistent about limiting use of temps because they're paid less, are eligible for skimpier benefits and have weaker protections under the union contract.

"We've been watching a race to the bottom over the past several years for working men and women in this country," Jones said Monday.

The union's members have some of the best health care benefits in America, contributing just 3% to their own coverage, compared with 29% for the average employee-covered family plan, according to the Kaiser Family Foundation.

A source at Ford says health care costs for its 56,000 hourly workers will top $1 billion next year for the first time. GM pays about $900 million a year for the health benefits of its U.S. hourly staff.

To reduce runaway health care costs, the carmakers are going to have to get creative, said Kristin Dziczek, vice president of industry, labor and economics at the Center for Automotive Research.

"It's the third rail -- you don't mess with people's benefits," Dziczek said. "The membership will resist and have a hard time ratifying major cost-share changes. They've got good benefits and they don't want to see them change."

Information for this article was contributed by Tom Krisher of The Associated Press; by David Welch, Gabrielle Coppola and Keith Naughton of Bloomberg News; and by Eric D. Lawrence of the Detroit Free Press.