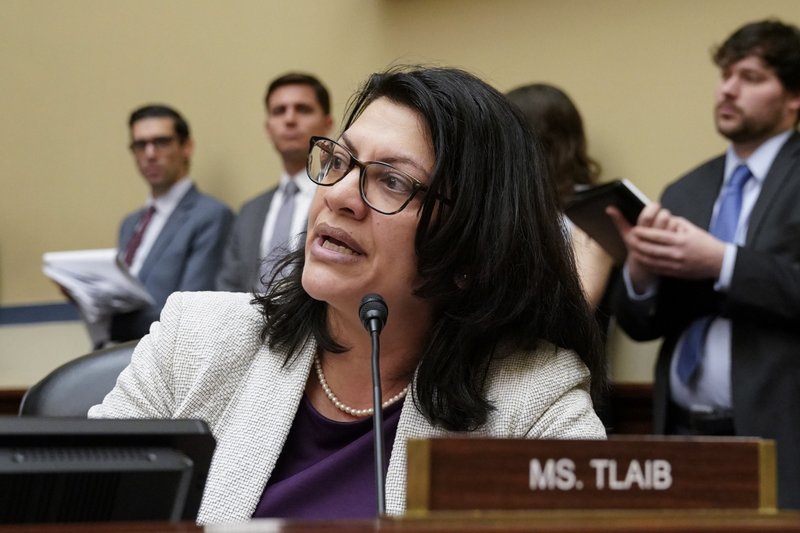 FILE - In this Feb. 26, 2019 file photo, U.S. Rep. Rashida Tlaib, D-Mich., listens during a House Oversight and Reform Committee meeting, on Capitol Hill in Washington. A relative of Tlaib living in the West Bank says President Donald Trump is an anti-Palestinian racist. Tlaib, a Michigan Democrat and daughter of Palestinian immigrants, was one of four congresswomen of color who were targeted in Trump&#x2019;s latest Twitter barrage. (AP Photo/J. Scott Applewhite, File)

RAMALLAH, West Bank -- Palestinians on Monday denounced President Donald Trump's attack on U.S. Rep. Rashida Tlaib, accusing him of racism and saying it once again proves his bias against the Palestinian people.

Tlaib, a Michigan Democrat and daughter of Palestinian immigrants, was one of four congresswomen of color who were targeted in a Trump Twitter barrage over the weekend.

Trump said the women should go back to the "broken and crime infested" places they came from, ignoring the fact that all are American citizens and three, including Tlaib, were born in the U.S. Trump also accused them of saying "terrible things" about the U.S. and said they "hate Israel."

Although Tlaib has never lived in the West Bank, she still has relatives in the area and is widely seen as a local hero for making her way to the highest levels of American government.

Bassam Tlaib, an uncle of the congresswoman who lives in the West Bank, called the president's comments "a racist statement meant to target Rashida because she has Palestinian roots."

"This statement proves that Trump is anti-Palestinian, anti-Islam and completely biased toward Israel," he added.

He said "the main source of crime" in the West Bank is Israel's half-century-long occupation. The Palestinians seek the West Bank as the heartland of a future state, with east Jerusalem as their capital. "Instead of helping our people get back their rights, President Trump has chosen to stand beside the oppressors, not the oppressed," he said.

Ibrahim Milhim, spokesman for the Palestinian Authority, said Trump's statement is an "insult" to the office of the presidency and the laws of the U.S.

"It's an insult to the Statue of Liberty, America's most famous symbol, an insult to the American values where migrants from all over the world are united as one nation under one law," he said.

The Palestinians had cut ties with the White House after Trump recognized Jerusalem as Israel's capital in December 2017 and subsequently moved the American Embassy to the contested city. The White House responded by shuttering the Palestinian diplomatic mission in Washington and cutting hundreds of millions of dollars of aid.

The Palestinians have pre-emptively rejected Trump's Mideast peace plan, accusing him of being unfairly biased toward Israel, and boycotted last month's conference in Bahrain where the White House launched the economic portion of its plan.

It was not clear why Trump mentioned Israel in his latest tweets. One of Trump's other targets, Rep. Ilhan Omar of Minnesota, who was born in Somalia, ignited a bipartisan uproar in Washington early this year when she suggested that members of Congress support Israel for money. For her part, Tlaib has endorsed the Palestinian-led boycott movement against Israel.

Israel, on the other hand, has forged strong ties with Trump, who in addition to moving the embassy has recognized Israel's annexation of the Golan Heights.

Prime Minister Benjamin Netanyahu has repeatedly praised Trump, drawing criticism from opponents in Israel and some Jewish American groups that he is politicizing and weakening what has traditionally been bipartisan support for his country in the U.S.

Israel's Foreign Ministry declined to comment on Trump's tweets. But Netanyahu's son Yair, who serves as an unofficial adviser to his father, welcomed them, especially his call for the four lawmakers to apologize to the people of Israel.

"Thank you so much! You are the best friend the Jewish people ever had in the White House!" Yair Netanyahu wrote on Twitter.

Meanwhile, British Prime Minister Theresa May and the two men competing to succeed her condemned Trump's tweets but stopped short Monday of calling his remarks racist.

May, who is set to step down next week following her resignation over Brexit, thinks "the language which was used to refer to the women was completely unacceptable," spokesman James Slack said.

Boris Johnson and Foreign Secretary Jeremy Hunt, the two politicians in the runoff to replace May as Conservative Party leader and U.K. prime minister, agreed.

"If you are the leader of a great multiracial, multicultural society, you simply cannot use that kind of language about sending people back to where they came from," he said during a debate with Hunt.

His political rival echoed the sentiment.

"I have three half-Chinese children," said Hunt, whose wife is Chinese. "And if anyone ever said to them, 'Go back to China,' I would be utterly appalled."

But Hunt -- who as foreign secretary is Britain's top diplomat -- balked when asked whether he would call Trump's comments racist, instead noting that the United States is Britain's closest ally.

"It is not going to help the situation to use that kind of language about the president of the United States," he said

Johnson declined to answer when he also was asked if Trump's words were racist.

Information for this article was contributed by Abdi Guled, Shahar Golan and Jill Lawless of The Associated Press.