• Scarlett Johansson says comments she made on the "authentic casting" debate have been taken out of context and asserts that she supports diversity in film. The actress came under fire in 2017 for playing an Asian character in Ghost in the Shell and canceled plans last year to portray a transgender man in the upcoming film Rub & Tug, after transgender actors and advocates questioned the casting. In a recent interview with As If magazine, Johansson said actors should be allowed to play any person "because that is my job and the requirement of my job." On Saturday, Johansson said that those comments were subsequently edited in other publications for "clickbait." "I personally feel that, in an ideal world, any actor should be able to play anybody and Art, in all forms, should be immune to political correctness," she said in a statement. "I recognize that in reality, there is a wide spread discrepancy amongst my industry that favors Caucasian, cisgender actors and that not every actor has been given the same opportunities that I have been privileged to."

• Code breaker and computing pioneer Alan Turing has been chosen as the face of Britain's new 50 pound note, the Bank of England announced Monday. Governor Mark Carney said Turing, who did ground-breaking work on computers and artificial intelligence, was "a giant on whose shoulders so many now stand." During World War II, Turing worked at the secret Bletchley Park code-breaking center, where he helped crack Nazi Germany's secret codes by creating the "Turing bombe," a forerunner of modern computers. He also developed the "Turing Test" to measure artificial intelligence. After the war he was prosecuted for homosexuality, which was then illegal, and forcibly treated with female hormones. He died at age 41 in 1954 after eating an apple laced with cyanide. Turing received a posthumous apology from the British government in 2009, and a royal pardon in 2013. The U.K's highest-denomination note is the last to be redesigned and switched from paper to more secure and durable polymer. The Turing banknote will enter circulation in 2021. It includes a photo of the scientist, mathematical formulae and technical drawings, and a quote from Turing: "This is only a foretaste of what is to come, and only the shadow of what is going to be." 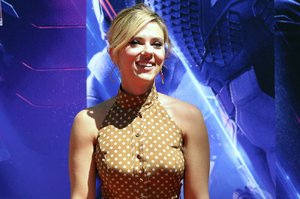 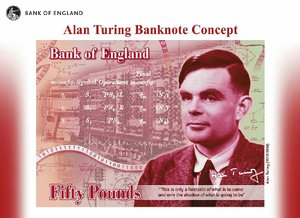 Photo by Bank of England
In this undated handout provided by the Band of England on Monday, July 15, 2019, a view of the the concept of the new 50 pound note bearing the image of Second World War code-breaker Alan Turing. The Bank of England has chosen codebreaker and computing pioneer Alan Turing as the face of the country’s new 50 pound note. Governor Mark Carney said Monday that Turing was “a giant on whose shoulders so many now stand.” Turing’s work cracking Nazi Germany’s secret communications helped win World War II, but after the war he was prosecuted for homosexuality, and died in 1954 after eating an apple laced with cyanide.