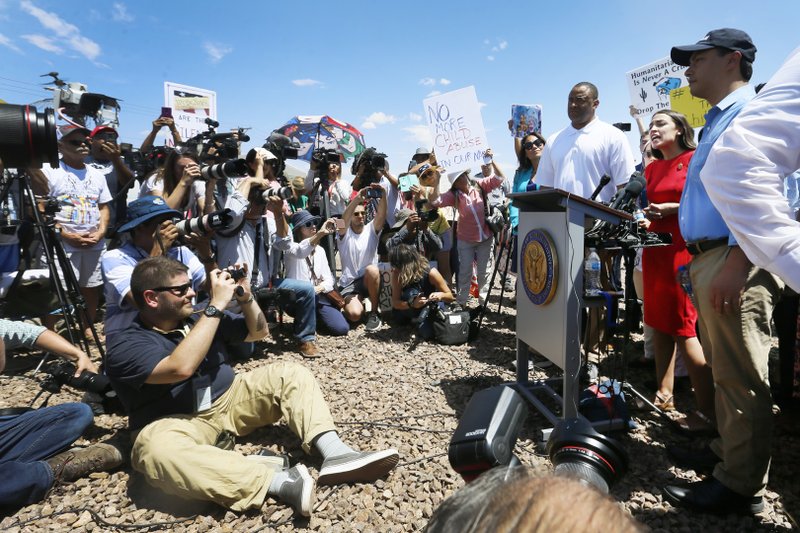 U.S. Rep. Alexandria Ocasio-Cortez, D-New York, talks about what she saw on her tour of area border facilities Monday, July 1, at the Border Patrol station in Clint. Ocasio-Cortez was attempting to talk over the protesters. (Briana Sanchez / El Paso Times via AP)

WASHINGTON -- U.S. Customs and Border Protection officials said Monday that 62 current and eight former Border Patrol employees are under internal investigation after revelations of a secret Facebook group that mocked lawmakers and migrants.

Most are under investigation for posts that surfaced in a secret group called "I'm 10-15," where messages questioned the authenticity of images of a migrant father and child dead on the banks of the Rio Grande River and depicted crude, doctored images of U.S. Rep. Alexandria Ocasio-Cortez, D-N.Y., purporting to perform a sex act on President Donald Trump.

There were posts in at least one other closed group under investigation, he said.

"Messages posted on a private page that are discriminatory or harassing are not protected and violate standards of conduct," said Matthew Klein, assistant commissioner of the agency's Office of Professional Responsibility.

Klein said his agency referred the case to the Homeland Security Department's watchdog agency, which declined to investigate and sent the case back to Customs and Border Protection. He said they are now focused on fact-finding and would identify criminal behavior if there was any, but it was not considered a criminal probe.

The potential punishment is based upon the severity of the misconduct, whether or not the employee has previously engaged in misconduct and whether or not there's a direct tie to their employment. An agent could get counseling or they can get anything from a written reprimand to suspension, demotion or firing.

ProPublica first posted details of the Facebook group, which boasts 9,500 members, just as Ocasio-Cortez and other Democrats were headed to tour border facilities.

Some were graphic, doctored images of Ocasio-Cortez, including one that shows a smiling President Donald Trump forcing her head toward his crotch, according to screenshots obtained by ProPublica. Other comments refer to Ocasio-Cortez and fellow Democratic Rep. Veronica Escobar of Texas as "hoes," and one member encouraged agents to throw a "burrito at these [b**]."

A news story about a 16-year-old Guatemalan migrant who died in Border Patrol custody in May elicited a response from one member, "If he dies, he dies." Another member posted a GIF of the Sesame Street character Elmo with the quote "Oh well."

The posts threatened to tarnish the Border Patrol's image at one of the most challenging times in its 95-year history. Border Patrol Chief Carla Provost said the posts were unacceptable.

"These posts are completely inappropriate and contrary to the honor and integrity I see -- and expect -- from our agents day in and day out," Provost said in a statement at the time. "Any employees found to have violated our standards of conduct will be held accountable."

But news reports have since surfaced that she may have also been a member at one point, though there is no indication she knew about the inflammatory posts.

Officials on Monday would not say whether those under investigation included Provost or other top brass but said they were working through the level of responsibility a member would have, depending on how active he or she was.

"To be clear, the expectations of professional conduct don't end at the end of a shift," Klein said.

Not reporting misconduct is also considered misconduct, he said, and they were working to determine who was active on the page, who knew about the posts and who were just bystander members of the group. And the investigation was ongoing regardless of rank, they said.

Customs and Border Protection investigators sent a letter to Facebook to archive the data and have been identifying members and interviewing them. Once completed, they will send their findings to Border Patrol, which will determine whether misconduct occurred and whether a punishment is required.

Since 2016, 80 other individuals have been investigated for misconduct for social media posts, and his office put out a reminder on policies last year, Klein said. Customs and Border Protection officials didn't immediately have the outcome of those investigations but said they were working to gather the information.

A former agent who belongs to the 10-15 Facebook group told AP that members had to provide the administrator with their graduating class number from the Border Patrol Academy and have a current member vouch for their credentials. The agent, who retired last year in San Diego, spoke to The Associated Press on condition of anonymity because he feared a public backlash.

The agent likened the forum to a bar where agents would gather after work and swap stories. He said any agent active on Facebook would have likely received an invitation to join.

Information for this article was contributed by Elliot Spagat of The Associated Press.