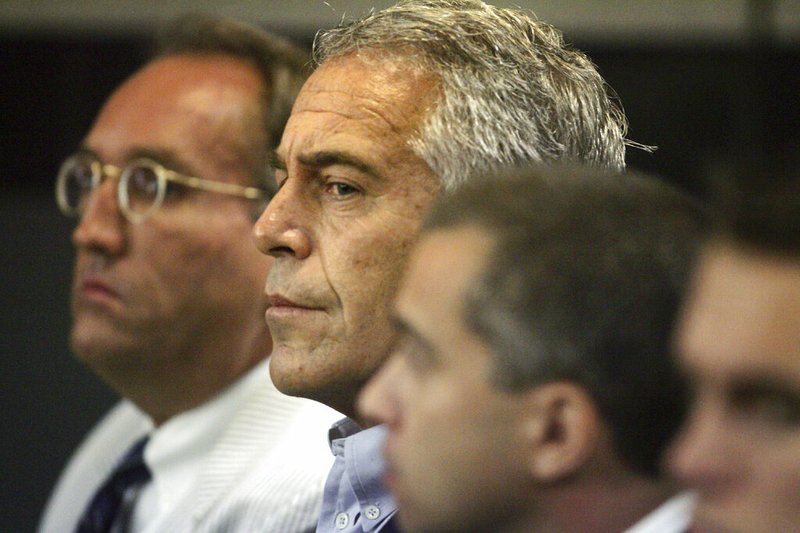 FILE - In this July 30, 2008, file photo, Jeffrey Epstein, center, appears in court in West Palm Beach, Fla. Federal prosecutors, preparing for a bail fight Monday, July 15, 2019, say evidence against Epstein is growing "stronger by the day" after several more women contacted them in recent days to say he abused them when they were underage. (Uma Sanghvi/Palm Beach Post via AP, File)

NEW YORK -- Financier Jeffrey Epstein will remain behind bars for now as a federal judge mulls whether to grant bail on charges he sexually abused underage girls.

The judge said Monday he needed more time to make a decision during a hearing Monday in New York.

Federal prosecutors maintained the well-connected Epstein, 66, is a flight risk and danger to the community -- saying he should remain incarcerated until he is tried on charges that he recruited and abused dozens of underage girls in New York and Florida in the early 2000s.

Prosecutors said their case is getting "stronger by the day" after several more women contacted them in recent days to say he abused them when they were underage.

Assistant U.S. Attorney Alex Rossmiller also revealed Monday that authorities found "piles of cash," "dozens of diamonds" and an expired passport with Epstein's picture and a fake name during a raid of his Manhattan mansion following his July 6 arrest .

Epstein's lawyers said he has not committed crimes since pleading guilty to soliciting a minor for prostitution charges in Florida in 2008 and that the federal government is reneging on a 12-year-old plea deal not to prosecute him. They said they planned to file a motion to dismiss the case and that Epstein should be allowed to await trial under house arrest in his $77 million Manhattan mansion, with electronic monitoring.

In a written submission Friday to U.S. District Judge Richard M. Berman, prosecutors shared new information about their investigation and why they perceive Epstein as dangerous.

They said several additional women in multiple jurisdictions had identified themselves to the government, claiming Epstein abused them when they were minors. Also, dozens of individuals have called the government to report information about Epstein and the charges he faces, prosecutors said.

Prosecutors said they believe Epstein might have tried to influence witnesses after discovering that he had paid a total of $350,000 to two individuals, including a former employee, in the last year. That came after the Miami Herald reported the circumstances of his state court conviction in 2008, which led to a 13-month jail term and his deal to avoid federal prosecution .

"This course of action, and in particular its timing, suggests the defendant was attempting to further influence co-conspirators who might provide information against him in light of the recently re-emerging allegations," prosecutors said.

In addition to the charges in the indictment, prosecutors are also reviewing dozens of electronic files seized during a raid on Epstein's residence after his July 6 arrest, finding even more photos than the hundreds or thousands of pictures of nude and seminude young women and girls they had reported prior to a court hearing a week ago.

In their submission to the judge, Epstein's lawyers say their client has had a clean record since he began registering as a sex offender after his Florida conviction.

They said the accusations against Epstein are "outside the margins of federal criminal law" and don't constitute sex trafficking since there were no allegations he "trafficked anybody for commercial profit; that he forced, coerced, defrauded, or enslaved anybody."

Prosecutors said efforts by defense lawyers to characterize Epstein's crimes as "simple prostitution" were "not only offensive but also utterly irrelevant given that federal law does not recognize the concept of a child prostitute -- there are only trafficking victims -- because a child cannot legally consent to being exploited."