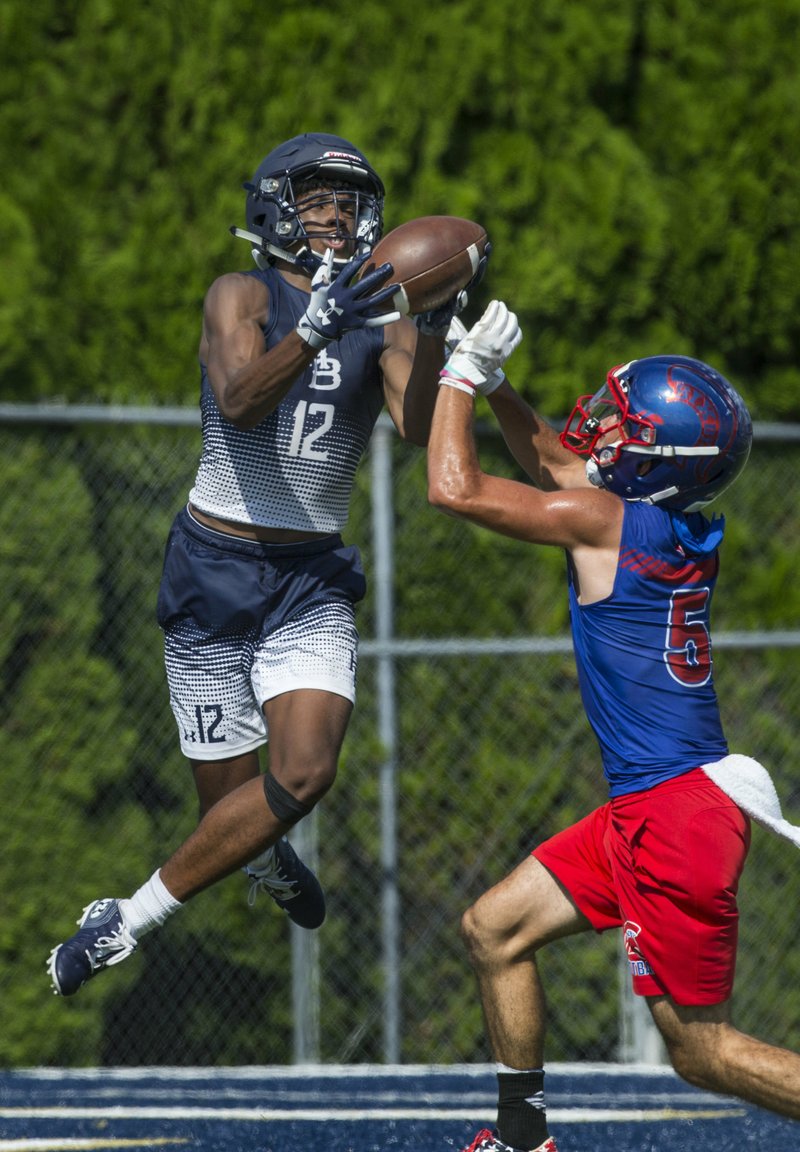 SPRINGDALE -- There are athletes who can jump, and then there is Micah Seawood.

The Springdale Har-Ber rising senior is not getting the recruiting attention he deserves, said Wildcats coach Chris Wood. After Saturday's eye-popping performance in the Southwest Elite 7on7 tournament at Shiloh Christian, that oversight is likely to change.

"He's the best receiver in the state, and he's not getting the respect he deserves," Wood said as his team collected championship hardware on the other side of the field after winning the tournament championship. "If you watched him today, how he high-points the ball, his route-running, the way he out-jumps people. He's one of the best in the state, and nobody is talking about him."

The defensive backs from two defending Oklahoma state champion teams will be talking about him for a long time.

The 6-foot, 170-pound Seawood time and again blew past, jumped over or simply shook them off with his quickness. Against defending 6A-1 champion Broken Arrow, Seawood punctuated Har-Ber's 30-13 win by going up high over Oregon commit Myles Slusher for a clinching touchdown.

Against defending 6A-2 state champion Bixby in the championship, Seawood scored on the first play of the game, blowing past the Spartans' defenders and pulling in a throw from Blaise Wittschen that spurred a 22-19 win, forcing a second championship game.

The Wildcats, who went 14-2 over the two days of the tournament, dominated Bixby in the second game 26-14 behind the play of their defense. Har-Ber led 24-6 at one point with Jujuan Boyd, J.B. Brown, Cole Bowen and Liem Taylor leading the way. Brown and Bowen had point-producing interceptions, and Boyd and Taylor each had big pass-breakups in both games.

"I'm extremely excited about how we played coming off the dead period," Wood said. "I thought the kids really fought through and were resilient. We had some kids get banged up. We lost one of our receivers, one of our secondary guys, and all they did is keep stepping up. We had defensive kids playing offense, and offensive kids playing defense, so just really proud of the way they played together and fought together.

"I think our defense only gave up about 12 points per game in the tournament, which is unheard of in 7-on-7. Our staff did a tremendous job coaching the defense and putting them in position to make plays and they made the plays."

"That was a tough one, but that was a fun game to be a part of," Bentonville coach Jody Grant said. "But we played a lot of games over the past two days and had a lot of success. We got a lot of reps. We had a few guys go down with some injuries, so we got some young guys and some guys who haven't got a lot of opportunities some reps, which is always good."

Seawood stopped short of calling the 2019 season a year of redemption after the Wildcats missed the playoffs in 2018 in a season that saw numerous players transfer and the team being forced to forfeit games for playing an ineligible player.

But he was clear that the Wildcats have a renewed focus while putting the 2018 season as far behind them as possible.

"Last year was a down year for us," said Seawood. "This year we want to flip things around. The coaches have been on us, and we've been on each other to turn things around and get a ring. Last year we were just all disconnected, but this year we are all on one path and we're trying to play as a team."

Wood said the Wildcats will spend the next two weeks running and lifting weights ahead of the start of fall workouts. Har-Ber will open the regular season at Pulaski Academy on Aug. 29.