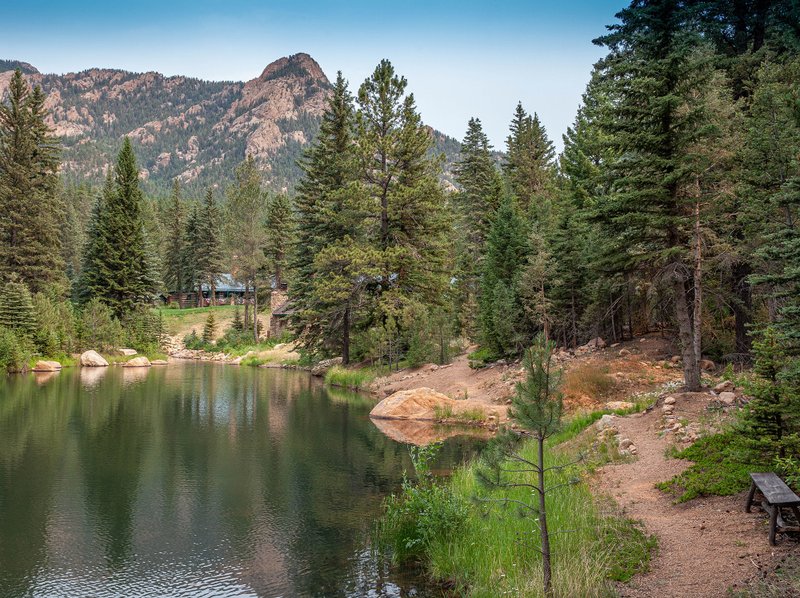 Rocky ridges define the valley, at the Ranch and beyond. Photo by Steve Haggerty via ColorWorld/TNS

MANITOU SPRINGS, Colo. -- I was returning from a hike up Mount Vigil, the peak you can see from the Ranch at Emerald Valley, near Colorado Springs, when a leathery-faced cowboy walked by, humming a tune and leading a horse.

At the same moment, a car pulled up and the driver, eyes masked behind dark sunglasses, leaned out and asked for directions to the ranch, which just happened to be where I was staying.

A half-dozen hiking trails and climbs start at the ranch and explore the surrounding Pike National Forest. For guests combining a visit to Cloud Camp and to the Ranch at Emerald Valley, the 5.3-mile hike from the top of Cheyenne Mountain down to the ranch is a favorite.

For information: Learn more about the Ranch at Emerald Valley; about Cloud Camp, the lodge atop Cheyenne Mountain; and about the parent property, the Broadmoor Hotel, in Colorado Springs, at broadmoor.com. Rates vary depending on the season and weather.

Included in daily rates: Transportation between the Ranch at Emerald Valley and the Broadmoor Hotel, a nine-mile drive. On-site activities and equipment, trail hikes, nature walks, fishing gear, horseback rides, all meals, snacks, beverages, wine, beer and bar drinks. Because the Old Stage Riding Stable is a concession, long horseback rides, such as the popular cattle drives, are priced separately.

Getting there: Fly into Denver; then drive or fly to Colorado Springs.

I would have answered, but at that moment the old cowboy stopped dead, looked at the license plate -- "Texas," he muttered -- looped the reins around the saddle horn and unwrapped a piece of gum. Then he pointed down the road. "That way," he said.

"Thanks," said the driver, hesitating. "I'm Tony," he added. "Say, do you know why they call it Emerald Valley? Was there a gold mine here? Gemstones, maybe?"

Curious myself, and still out of breath, I stepped closer, the better to hear.

"Well now, I couldn't say," replied the cowboy, pulling a dented army canteen off his belt. "I've wondered on it myself. Might be for them green trees, a hideaway-like, where a person can git away and think.

"They used to call it Camp Vigil, after that mountain there. Real special for old Mr. Penrose, Spencer Penrose he was, the man who built the first lodge up there on Cheyenne Mountain. Back in the 1920s, that was."

The cowboy paused for another long swallow. "The way they tell it," he said, "he'd git down here with his friends, sittin' up late, telling stories about mountain climbing and all. That's a purty fine log cabin he had, the one they still got. It's renovated now, with a real bar, all chinked up, nice and tight. You'll see. No rain gittin' in there.

"All kind of trees shades them log cabins, and your creek has a waterfall and lakes stocked regular with trout. The cabin on the hill is a palace, big enough for weddings and such. The cook's in the kitchen most days, handy with the fixin's. I stop in now and then and he makes me a plate."

When the cowboy took another swallow I spoke up. "Is Spencer Penrose the one who built the zoo at the bottom of the mountain, and every time there was a parade he rode the elephant through town?"

"Yes, ma'am," said the cowboy. "He bought the land for them animals. It's what happens to folks from the east when they git to this here west. The land took old Penrose and it's took the new owner, too. The rocks, the hills and your meadows, they call you to put down roots.

"You buy an acre, build a cabin, git some chickens and you think you're done. Then the place next-door gits a sale sign so you buy it, git a rail fence and a cow and call it a ranch. Then that homestead down by the creek, well, you need water in these parts, so you buy it, too. That's history, hereabouts."

With that, the old cowboy tipped his hat, nodded to both of us, clucked to the horse and they disappeared down the road.

"Guess I'll see it for myself," said the driver, adjusting his sunglasses and revving the engine. "Can I give you a ride?"

"No thanks, I'll walk," I said. "The ranch is pretty close now, down around the corner."

Alone again, I got to thinking. That cowboy was right. Gossip is just another word for history, especially in ranch country. In the late 1890s, the dirt track here was known as Gold Road. I'd seen the mine tailings myself, a heap of yellow dirt pushed up past the trail, where our horseback ride turned toward the corral. And for all that, they never did find gold.

After the last gold strike petered out, arrivals included a settler, a Girl Scout Camp and finally Spencer Penrose, who leased the 16-acre parcel from the Pike National Forest for his newly created social club, the Pikes Peak Camping and Mountain Trails Association. The club didn't last, but the cabin survived the years, including an interval as a dude ranch, in the 1970s.

After the Broadmoor Hotel changed hands in 2011, new owner Philip Anschutz bought the property, eventually restoring and enlarging the lodge and building guest cabins, hoping to re-create the ranch and its era, along with an authentic touch of wilderness.

When the work was finished, it was so accurate that I couldn't tell the old walls from the new ones, or the antiques from the reproductions. The custom made interior furnishings not only echoed the era but added a decided touch of luxury. The 10 guest cabins -- for two, four or eight guests -- had their own chinked logs and period decor; all outfitted, of course, with modern amenities.

As for the so-called "palace," that's where I stayed. By the time I tried to make a reservation, every cabin was booked, except that one up the hill. Climbing uphill on a winding stone path, I thought I'd been banished to the barn. Then I saw the flagstone patio -- large enough for a 50-guest reception, and opened the front door. The living room, furnished with hand-tooled leather chairs, luxurious sofas and a man-size fireplace, begged me to sit down; the walls, hung with western and American Indian art, insisted that I take a closer look.

The kitchen, large-party size, included a long center island, surrounded by walls covered with cupboards, and counters with three sinks and the latest appliances. With bedrooms upstairs and down (and bathrooms for each) there was room for eight.

After that, no day was like another. You could sleep late, or eat breakfast early, then climb the ridge to see the views. Five or six other trails climbed peaks or crossed through the forest, or you could ride horseback. A hot lunch and farm-fresh salad or sandwich was followed by a game of Scrabble, a walk around the perimeter or a nap in the hammock.

Come 4 p.m, I fetched the fly rod and headed for the lake where the rainbow and brown trout were breaking the surface. Used the wrong fly and came away empty. Cocktail hour followed, improved by the chef's hors d'oeuvres. Dinner time lasted as long as you could eat or talk, in the dining room or stargazing around the campfire.

Wednesday and Saturday evening campfires, when recording artist and cowboy singer Jeff Houlton entertained, were the biggest surprise of all. Corny, you're thinking? Maybe, but don't laugh yet.

I was watching the fire toss up sparks and sipping a smooth cabernet, expecting to hear the usual background thrumming, elevator music, usually, when Houlton tuned the strings and tore into the "Orange Blossom Special," astonishing everyone with his lightning-fast picking and perfect rhythm. Not only did he wow us with some of the smartest flat picking ever -- and faultless two and three-finger work -- but he sang each song differently, turning the most ordinary lyrics into a drama with an ending.

As the guests called out requests, he called on the vast repertoire he hides under that cowboy hat and performed as asked. Country & western, pop, bluegrass, Pete Seeger, Elton John, the Grateful Dead -- he knew them all.

Listening, I couldn't help wonder why it felt so familiar. Then I remembered. The evening reminded me of Stead's Ranch, founded in 1904 and long gone now, a historic guest ranch and lodge tucked among the pines, beneath snowy peaks, in Colorado's Rocky Mountain National Park.

For many a golden summer, a worldwide procession of guests came through Stead's, from mountain climbers and presidents to stage celebrities, opera singers and families with kids, all sitting around the campfire together, sharing the West's special brand of hospitality.

Which is just how it felt that night at the Ranch at Emerald Valley, at the end of the track they once called the Gold Road. I think they've hit pay dirt after all.