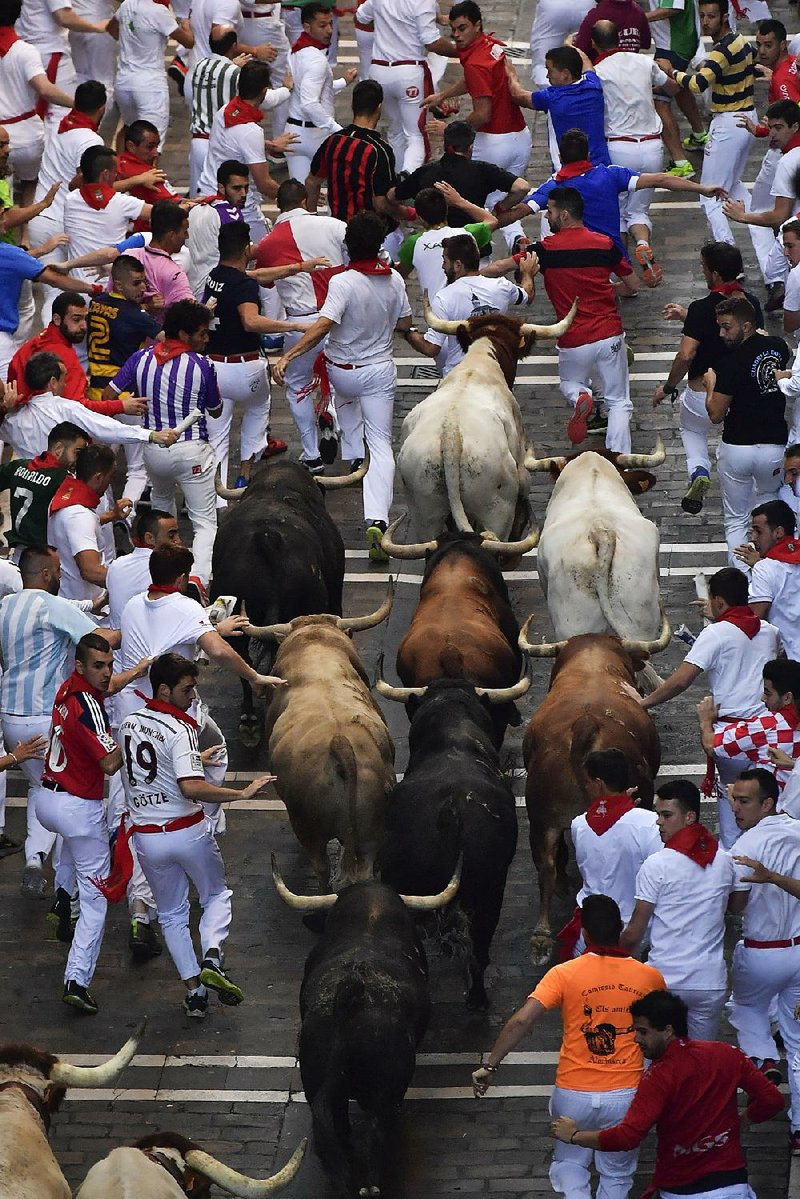 Revelers along with bulls dash through the streets Friday at the San Fermin festival in Pamplona, Spain.

PAMPLONA, Spain -- A man was gored Friday and five other people injured in the sixth bull run of the San Fermin festival, officials in the northern Spanish city of Pamplona said.

Hospital spokesman Tomas Belzunegui said the man was gored in his left leg early in the run as one bull fell behind the pack and ran close to the side of the street, pinning runners to a wall.

Another patient had a badly bruised chest, while others had cuts and bruises, Belzunegui said.

The dash with six bulls along cobbled streets to Pamplona's bullring Friday lasted 2 minutes and 18 seconds. Several bulls and dozens of runners slipped and fell on the 930-yard course, making the fast race particularly hazardous.

The nine-day San Fermin fiesta draws thousands of revelers each year from around the world. Mostly wearing white with a red sash, they test their courage by running alongside and in front of six fighting bulls that are let loose through the city streets early in the day.

Among those killed was Malik Toor, a commander of a pro-government militia who had organized the wedding, police official Fayz Mohammad Babarkhil said.

Officials said Toor was the likely target of the attack, which took place in Pachirwa Agham district of Nangarhar province.

No one took responsibility for the bombing, but Taliban militants said they were not involved in the wedding explosion, according to a statement posted on the group's official website.

LONDON -- British authorities are charging hundreds of climate-change protesters with public-order offenses in hearings that will take weeks to process.

Two courtrooms are being set aside for one day each week for 19 weeks to deal with Extinction Rebellion defendants, who range in age from 20 to 76.

The London police agency is pushing for the 1,151 people arrested to face charges after demonstrations gridlocked parts of central London in April.

Dozens of climate-change protesters appeared Friday. Many of the cases involve the failure of the demonstrators to remain in designated areas.

Extinction Rebellion says activists are pleased to have a day in court but "the burden this tsunami of cases will place on the courts is unprecedented."

ROME -- A court in Palermo, Sicily, ruled Friday that the wrong Eritrean man was arrested and tried as a migrant-smuggling kingpin and ordered him released from jail, a ruling cheered by supporters who had for years championed his claim of mistaken identity.

Defense lawyer Michele Calantropo said that his client, Medhanie Tesfamariam Behre, "cried for joy" when the court ordered him released from jail, three years after he had been extradited to Italy from Sudan on a charge of human trafficking.

But while the court exonerated him of the trafficking charge, it convicted him of a lesser charge -- aiding illegal immigration -- for helping two cousins reach Italy, based on investigations conducted after Behre was extradited to Italy, Calantropo said.

The court sentenced him on that charge to five years in prison. But since Behre already spent three years behind bars under a warrant for the wrong man, it was likely under Italy's justice system that, as a first offender, he won't have to do any more time in jail.

Prosecutors had argued the defendant was Medhane Yehdego Mered, who's suspected to be a human-trafficking kingpin who profited as thousands of migrants were smuggled to Italy on unseaworthy boats launched from Libya. They had asked the court to convict him and give a 14-year prison term.

Palermo prosecutor Francesco Lo Voi brushed off the ruling that the wrong man had been tried as a kingpin.

"The court recognized that it was a person involved in aiding illegal immigration," Lo Voi said. "Thus [he was] not a poor carpenter unjustly persecuted," the Italian news agency ANSA quoted him as saying.

Calantropo said his client was a refugee from Eritrea who was in Sudan in hopes of migrating from Africa. He was arrested in Khartoum, Sudan, with the help of a British agency. During the trial, the man told the court that Sudanese police beat him and stole his identity document.

During the trial, the lawyer told the court that more than 28,000 signatures were gathered on petitions backing the defendant's claim that he was a victim of mistaken identity.