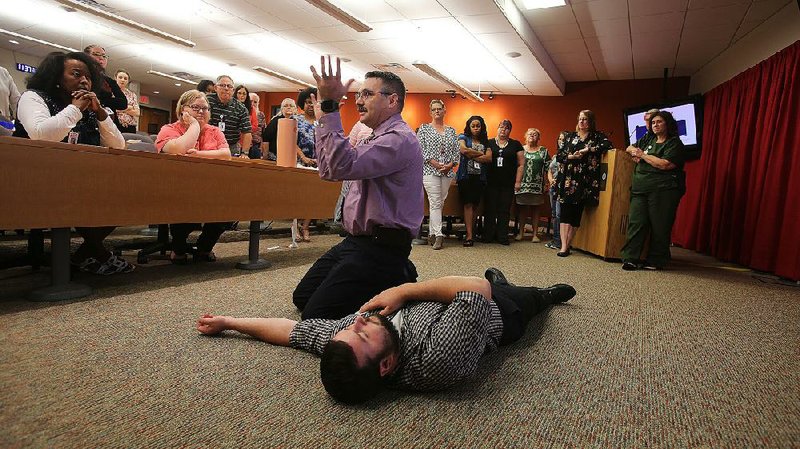 Jarrod Ritchie (center) with the Health Department demonstrates on Zach Smith the proper application of pressure to stop bleeding during a training session Friday at the department’s Little Rock campus. - Photo by Thomas Metthe

It's obvious when it's time to use bleeding-control training, Arkansas Department of Health trauma branch chief Greg Brown says.

Blood might be pooling around an injured person's body or spurting from an open wound. Maybe they've severed a hand or a foot.

"[But] you don't need to be a trauma surgeon. You don't have to have any credentials whatsoever to save a life."

On Friday morning, about 60 employees gathered in an auditorium at the Health Department's Markham Street campus to receive "Stop the Bleed" training led by Brown.

It was among several such training sessions to pop up in Arkansas, inspired by a national public health campaign aimed at cutting deaths from traumatic injury and during violent events such as mass shootings.

Similar to CPR campaigns, the program endorsed by the American College of Surgeons says laypeople should learn to use tourniquets, wound packing and pressure to treat injuries before an ambulance arrives.

That window of time matters because the human body can lose a fatal 15% of its blood volume in minutes, causing deaths that could otherwise have been prevented, Brown said.

"Eight minutes is an eternity in blood loss," he said.

During Friday's course, Brown used a model to walk his audience through packing gauze into a wound, using two fingers to cram in fabric while maintaining pressure.

Attendees fitted bright blue, Velcro-lined tourniquets on one another's biceps, giggling as they used a small stick attached to the devices (called a windlass) to tighten them to the point of discomfort.

The main thing to remember, Brown said, is to place tourniquet "high and tight" on an arm or leg -- and to not ease off if the injured person screams or says it hurts.

"It's gonna hurt. It's gonna get dirty. You're gonna hurt yourself ... But they're gonna live as a result," said department emergency medical services supervisor Jarrod Ritchie.

While it was once thought that tourniquet use led to the loss of the affected limb, we now know they are safe to use for hours, Brown said.

Friday's training included a few separate classes and was the first such series at the department, which Brown hopes to offer quarterly.

He urged participants to reach out to the department if a group they are involved with, such as a church or Kiwanis club, is interested in receiving training.

Over the past 18 months, about 2,850 people have received "Stop the Bleed" training in Northwest Arkansas through sessions offered by the Northwest Health system.

System trauma program manager Velvet Reed-Shoults leads those programs, which she says are relevant for incidents including tornadoes and agricultural or industrial accidents.

"Obviously active shooter or violent events [are] what gets people's attention, but that's really not the sole purpose of 'Stop the Bleed,'" she said.

In addition to classes on hospital campuses, she's taught the course to a motorcycle group in Rogers, members of leadership at a local Islamic center and about 800 Bentonville teachers and support staff.

While measuring the actual impact of the classes would be difficult, Northwest Health trauma services medical director Dr. Joe Olivi said he has seen an uptick in the number of people who arrive at the emergency department with a tourniquet.

"[These injuries] can just occur in multiple situations -- you know, motor vehicle crashes, motorcycle wrecks, being in a public place. I think it's really applicable," he says.

According to its website, ambulance service MEMS recently has scheduled training for people who want to become "Stop the Bleed" instructors, and this year's Act 245 of the Arkansas Legislature requires high school students to receive bleeding-control training by graduation.

School districts will choose who administers that training, and about 75% of the state's school nurses already have been trained in the techniques, a Department of Education spokesman said in an email.

Brown told his class Friday that the training was "one of the most important things you, as a layperson, can learn to do."

"It's all about those who are there, when the event happens, who make the biggest difference." 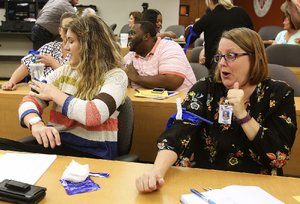