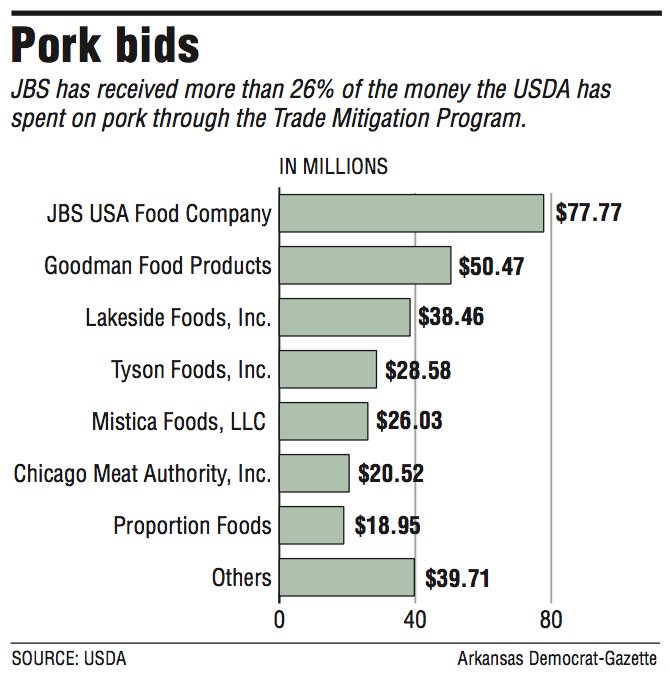 Some of the world's largest meat processors have won bids, worth tens of millions of dollars, from a federal program set up last year to help pork farmers stung by the ongoing trade war.

JBS USA, a subsidiary owned by a Brazilian meatpacker, has been awarded the lion's share of the bids, while competitors Tyson Foods, Cargill and others have earned far less, according to bid award data from the U.S. Department of Agriculture.

The Trade Mitigation Program, established after major trade partners China, Canada, Mexico and others began retaliating against the U.S. for tariffs placed on imports, were meant to offset harm to U.S. farmers and producers. Critics argue the companies obtaining most of the federal support are foreign-based and shouldn't be eligible for the program, even if the growers live in the U.S. However, industry veterans say the farmers will feel relief in the form of a trickle-down effect from the meatpacker.

"It's a foreign-owned company and getting U.S. support payments. On the surface, it sounds a little non-kosher, if you will, but it's still U.S. product raised by U.S. producers," said Travis Justice, chief economist of the Arkansas Farm Bureau.

Analysis of the data shows $300 million has been allocated to pork so far. It was first reported by the Midwest Center for Investigative Reporting, a nonprofit newsroom.

According to the results, JBS USA has won $78 million in pork contracts so far, followed by Goodman Foods and Lakeside Foods. Contracts from the program have gone to pork producers Tyson Foods, which received about $28 million; Cargill got $6 million; and Smithfield got $240,000.

Last August, U.S. Secretary of Agriculture Sonny Perdue signed off on the mitigation program, which included direct payments to farmers, as well as $1.2 billion worth of crops grown by farmers that were targeted by trade partners. Of the list of commodities facing retaliatory tariffs, pork was hit hardest, resulting in $558 million of planned pork purchases.

The hope is that taking supply off the market will raise pork prices and be beneficial to the farmer, said Chad Hart, an agricultural economist with Iowa State University.

"It's been hard to tell what this program's done because it's caught up in the wash of African swine fever," Hart said. The disease, which kills almost all pigs infected, has ravaged swine herds in China.

Looking at last summer's market prices, when the program was announced, he said today's prices are stronger.

"This procurement is part of it, but I'd argue a relatively small part of it," Hart said.

Others are concerned with how the money is being used. Nine U.S. senators sent a letter recently to Perdue urging him to stop making trade mitigation purchases from foreign-owned companies out of concern they won't benefit farmers. While the USDA allowed Smithfield, a company owned by the Chinese, to terminate its purchasing contract, the department also awarded a series of contracts to JBS and "has not established sufficient procedures to ensure that taxpayer-funded trade assistance for American farmers is not ultimately benefiting foreign companies," they said in the letter dated May 29.

"There really needs to be an examination of how this program is being administered and who is getting these awards," said Tony Corbo, a senior lobbyist with Food & Water Watch, a corporate watchdog group.

"The thing is, JBS is making money and they are not giving this back to the farmers," he said. "It's outrageous that a company that is not hurting is able to do this."

JBS also has a murky reputation. Aside from the owners' recent arrests and involvement in a corruption investigation, the company's U.S. beef operations were also fined $50,000 by the USDA for not accurately tracking weights, grades and prices for carcasses.

"We used to argue about big versus small, now we are seeing more of a domestic versus international, and I think that's going to be part of the debate as we move forward," Hart said.

Most of the nation's hog farmers are in the Midwest or along the East Coast. According to Justice, the few dozens left in Arkansas raise under contract for Tyson, Cargill or JBS USA. How the payments benefit farmers is through a sort of "trickle down" effect, Justice said.

The trade mitigation payments help maintain contracts between the growers and companies, known as integrators, he said. In general, the integrators own the animals and feed and bear most of the processing costs that growers would otherwise have to face if they owned the animals.

"I guess growers would benefit indirectly," Justice said about the USDA's trade payments.