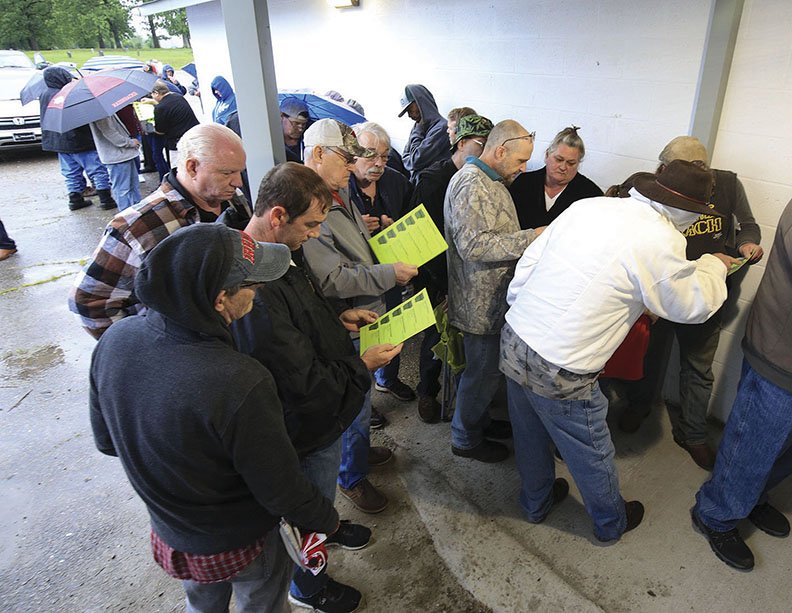 FILE — Customers look at the menu of products available outside Doctor's Orders RX medical marijuana dispensary in Hot Springs on May 11 as they wait in line for the business to open.

State regulators on Tuesday said there was insufficient evidence to substantiate allegations that three medical-marijuana dispensary owners were unlawfully affiliated with one another.

However, Alcoholic Beverage Control Division Director Doralee Chandler ordered the dispensary officials to submit more documents to ensure they were not affiliated.

Don and Mary Sears are married, and Todd Sears is Don Sears' son.

An unsuccessful applicant for a dispensary license challenged the Searses' licenses, claiming that all three violated an Arkansas Medical Marijuana Commission rule that precludes individuals from having ownership stake in more than one dispensary. The complaint, submitted by an attorney for Green Remedies Group, also alleged that the Searses provided false information in their dispensary license applications.

"There is not substantial evidence to establish an intent to derive a clear benefit from another license," Chandler wrote in letters to each of the Searses. "There could be clearer distinction by [Todd, Don and Mary Sears] to sufficiently divest [themselves] of any interest in [the other dispensaries]."

Letters were sent Tuesday to the Searses and released to reporters Wednesday.

Doctor's Orders RX was the first dispensary in Arkansas when it opened May 10. THC RX and Pain Free RX have not opened yet.

In this case, Chandler, relying on a 2016 Arkansas Supreme Court case involving separate liquor store permits by a married couple, reasoned that the Sears family ties didn't automatically mean they each would derive benefit from the others' dispensary ownership.

However, in Todd Sears' case, Chandler noted that "there could be clearer distinction" that he's sufficiently divested of any interest in Don or Mary Sears' dispensaries. Todd Sears is listed on the couple's joint bank account, and he forwarded a photograph of Doctor's Orders RX's license to state regulators.

Chandler ordered Todd Sears to, within the next 60 days, divest himself of all documents or photographs pertaining to Doctor's Orders RX and sign an affidavit "sufficiently divesting all equitable claim to or right in property of any dispensary license" other than his own.

Chandler ordered Mary and Don Sears to submit the same affidavits, and both said during hearings that they were exploring estate planning that would divest Todd and each spouse from any interest in their respective dispensaries upon death.

Both Don and Mary Sears made identical typographical errors in their dispensary company by-laws, which said that 1,000 shares of stock were issued but only 100 were distributed. Chandler also ordered the incorporation documents to be corrected within 60 days.

Chandler also dismissed complaints against all three Searses that they provided false information on their applications by not answering affirmatively to a question on the form that asked whether the applicant is "affiliated" with any other dispensary applicants. All the Searses said that they took the questions to mean whether they had any corporate affiliation with another applicant.

"It should be noted that even if [the Searses] had answered the question in the affirmative and explained how [they] were affiliated [with other applicants] it would not have had an impact on [their] right to have the application scored or [their] ability to receive a license," Chandler wrote.

Chandler's decision may be appealed to the Alcoholic Beverage Control Board within 15 days.

"Despite the rush to judgement by unsuccessful applicants, Doctor's Orders RX remains open," Don Sears said in a statement. "I am pleased to have the Arkansas Alcoholic Beverage Control Director reaffirm that our company, and companies of other members of my family, adhered to the rules of the application process. We will happily comply with the directive to file affidavits to confirm separate and distinct members of the Sears family's ownership of three different and distinct facilities.

"We, individually, remain proud to invest and provide this medical service to Arkansans, and we will continue to provide patients with products -- despite this frivolous complaint. Personally, I am excited to see this market expanding to more Arkansans with today's announcement of the 6th dispensary to open -- just 61 days after Doctor's Orders RX was the first dispensary in Arkansas to open."