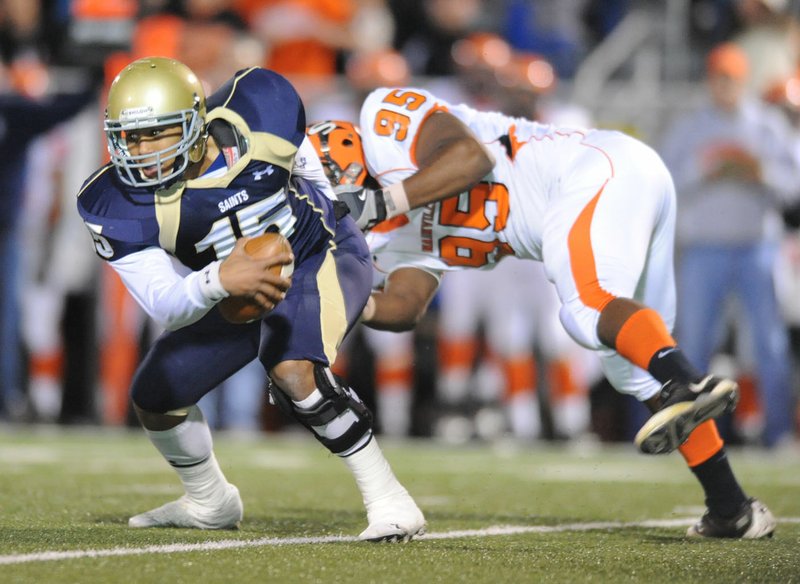 Shiloh Christian has long been known as "Quarterback High" for the elite signal-callers it has produced. The list of names who put up video game-like statistics is lengthy.

Among the fraternity of great Saints quarterbacks past and present, one stands out among the others.

Kiehl Frazier enrolled at Shiloh Christian prior to his sophomore year of high school in 2008, transferring from West Fork. By the time he was finished three years later, he had paced the Saints to a 40-3 record with three 4A State championships and had won an unprecedented three-straight title-game Most Valuable Player awards.

"'Til this day, he was as good as anybody I've ever coached," said his coach at Shiloh Christian, Josh Floyd, now the coach at Hewitt-Trussville (Ala.) High School. "He was a lot of fun to coach, because he was great under pressure and had a laid-back personality. It seemed like, the bigger the game, the bigger he played."

After a senior season that included passing for 2,975 passing yards and 42 touchdowns, while rushing for another 1,164 yards and 22 scores, the 6-foot-3, 210-pound Frazier was tabbed as USA Today's National Offensive Player of the Year and a Parade Magazine All-American. He was also selected to play in the prestigious Under Armour All-American game, as well as on USA Football's 2011 Under-19 National Team.

"Obviously, Kiehl had a lot of physical tools, a lot of God-given stuff that you can't coach, with great size and a big-time arm -- he could make every throw," said Floyd, who was a record-breaking Saints quarterback himself before Frazier. "Sometimes his best plays came on broken plays when he was just able to make something out of nothing."

Although Frazier was primarily a quarterback, he would line up at safety on occasion to give the defense a boost in certain situations.

Floyd recalls an epic playoff game against Nashville in 2009 in Frazier's junior season, when the Saints found themselves down 35-0 in the first half. The Saints were stunned, but the game's momentum swung when Frazier intercepted a Scrapper pass and returned it for a touchdown. The Saints completed a remarkable comeback that resulted in a 51-49 win.

"He was a smart kid that could pick up things quickly, was always a hard worker and he was just a super competitor," Floyd said. "He always knew what it took to win."

Frazier completed 64 percent of the passes he threw during his high school career, tallying 6,558 yards and 99 touchdowns. He ran for 2,206 additional yards and 38 TDs.

Many of those completed passes went to one of his go-to targets, Zann Jones, a record-setting receiver who reflects fondly on that three-year championship run and the impact Frazier had on Shiloh Christian after transferring from West Fork.

"I think we had a real solid crew, even before Kiehl came along -- we had been playing football together since the fourth grade," Jones said. "We had played against Kiehl in pee-wee football and knew he was a stud, and having him come in and join us was a huge boost, from an offensive standpoint. 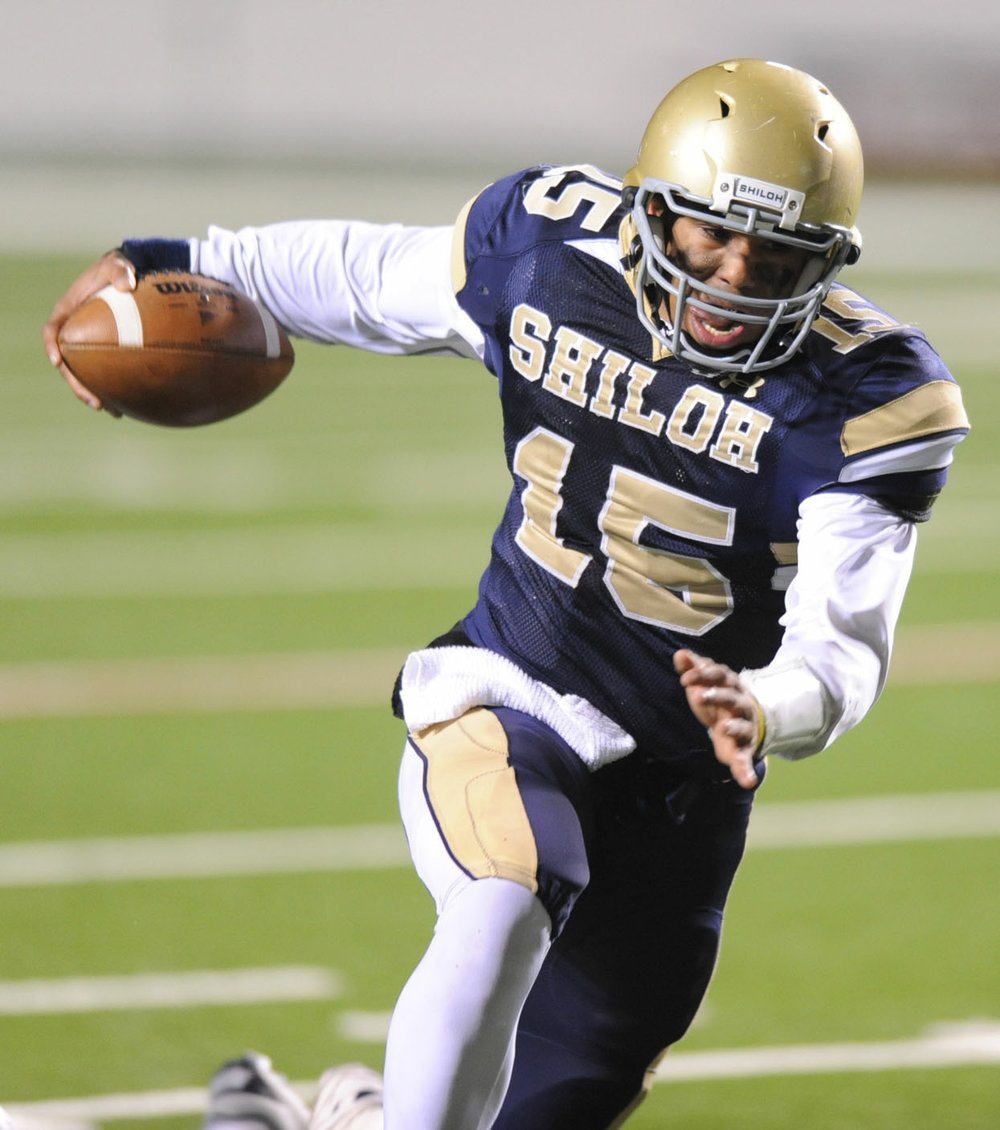 FILE PHOTO ANDY SHUPE Shiloh Christian quarterback Kiehl Frazier (15) carries the ball into the end zone through the Pulaski Academy defense Friday, Dec. 10, 2010, during the second half of the Saints' 61-40 win in the Class 4A state championship in War Memorial Stadium in Little Rock. Frazier was named the Most Valuable Player in all three state championship games he played in.

"We had a group of guys that were willing to put in the work to be the best that we could be, then you add him to the mix and it was a lethal combination. Just his mere size and his athleticism gave him the ability to be a little more elusive. Although our offense was not really built around a mobile quarterback, who knew that it would be such a benefit?"

Frazier grew up playing nearly every sport but eventually made football his primary focus. Although, he could have probably found success in other areas, as well.

Frazier went on to be one of the most sought-after high school players in the country, choosing to sign with defending national champion Auburn University in 2011. He quickly earned the starting job as a freshman, but after the Tigers began to struggle and a coaching change, Frazier left Auburn after three years and transferred to Division II Ouachita Baptist. The move enabled him to rejuvenate his career and also allowed him to play his final season with his brother, Jed Beach, a Tigers lineman.

Frazier led Ouachita to a 10-0 record during the 2014 regular season, including a win over Jones and his Henderson State team in the Battle of the Ravine rivalry game. What would be the Tigers best season in 100 years finally came to an end with a playoff loss to Minnesota-Duluth.

Frazier passed for more than 2,000 yards and ran for another 700 in that one season.

Floyd, who also played at Ouachita, wasn't surprised to see Frazier have the success he had at the next level, once given a chance to perform.

"That's the thing I probably loved the most about Kiehl, was that he was just a winner," Floyd said. "He always found ways to make plays."

Who was the best athlete ever at your school? The sports staff of the Northwest Arkansas Democrat-Gazette will highlight 14 former prep standouts over the next two weeks.

WHY HIM? Frazier directed one of the best three-year runs in Arkansas high school football history from 2008 to 2010 at Shiloh Christian, leading the Saints to three consecutive state titles and a combined 40-3 record. … Frazier was named the Most Valuable Player in all three state championship games. … As a sophomore split time at quarterback after transferring from West Fork before the season. … As a junior, was 224 of 356 passing for 3,812 yards and rushed for more than 900 yards. … As a senior, led the Saints to a 14-1 record by completing 153 of 247 passes for 2,959 yards and 42 touchdowns despite limited playing time in the second half of most games. … For his career, Frazier amassed 8,248 total yards and more than 100 touchdowns. … USA Today National Offensive Player of the Year in 2010 and Parade Magazine All-American. … Signed with Auburn as one of the nation’s top dual-threat quarterbacks. … Finished his college career at Ouachita Baptist by completing 144 of 245 passes for 2,051 yards and 19 touchdowns. Also rushed for 702 yards and 4 touchdowns in his only season at OBU.