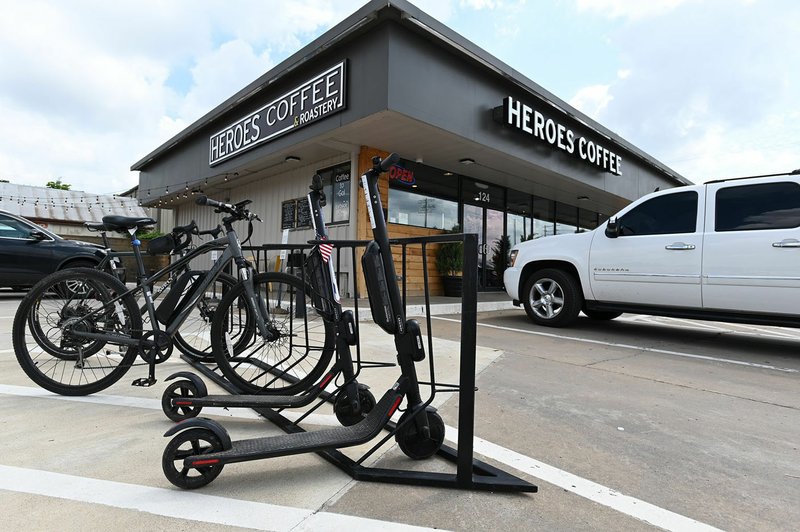 NWA Democrat-Gazette/SPENCER TIREY Goat Scooters, scooters that are rented by scanning a QR code, are seen on a bike rack outside Heros Coffee and Roastery shop on 8th and A street, Wednesday July 10, 2019 in Bentonville. - Photo by Spencer Tirey

Northwest Arkansas cities are figuring out how to handle the arrival of electric scooters, and the process will be an evolving one, officials say.

A state law set to take effect July 24 authorizes electric scooters vendors to set up shop in any Arkansas city. The scooters are battery-powered, have two wheels and a T-shaped handlebar and a floorboard. Riders pay to unlock them through a mobile app. The law says riders must be at least 16, and scooters have a maximum speed of 15 mph.

The law allows municipalities to establish reasonable regulations for the safe operation and presence of the scooters on public property, but not ban them from the public right of way.

Fayetteville’s City Council first took up a draft of an ordinance to regulate the devices July 2. Scooter companies will have to apply for a permit.

The original proposal would cap the number of scooters in the city at 1,000. It treats scooters on the road the same as bicycles. Riding would be prohibited on sidewalks with buildings abutting them. Riders also would need to stay on the right side of the road as much as possible and use hand signals. Helmets aren’t required, but encouraged.

There are standards included for proper parking, meaning they have to be set upright and in the public right of way. Certain parts of town would be designated as no-ride or slow-ride zones.

Assistant City Attorney Blake Pennington proposed some changes to the proposal after hearing the council’s discussion. The new language sets a cap of 500 scooters for the first six months of operation. Any vendor would have to have 100-250 devices in its fleet.

Vendors would have to renew their permits with the city after six months. They would be required to keep track of ridership. The new draft proposes each company would need to average two trips per scooter per day to maintain the number of devices in the fleet, to keep the number of scooters in line with demand. Companies could ask for up to 250 additional scooters upon renewal, effectively lifting that initial cap of 500 total. Mayor Lioneld Jordan would decide how many scooters a company can add.

The changes make it so the City Council wouldn’t have to approve a different number of scooters every time a company asks, said Peter Nierengarten, sustainability director. The council still would be able to adjust the ordinance.

“I think the ordinance gives us pretty good latitude in allowing more scooters or additional vendors,” he said. “Ridership, behavior and responsiveness of vendors is going to play into the decision-making.”

About 20 scooters showed up in downtown Bentonville this week from vendor Goat, Council member Tim Robinson said. The company operates with franchisers. City officials don’t know who the franchise owner is, he said. A company spokeswoman said she wouldn’t give out franchise owner information without consent but contacted the owner.

Robinson said he hopes to get an ordinance adopted as a short-term solution at the next council meeting July 23. From there, the city can explore a more in-depth regulatory measure in the fall, with adjustments made along the way as needed, he said.

Bentonville likely will use Fayetteville as a guide on what to do initially, Robinson said. Keeping scooters from piling up and ensuring safety will be at the forefront, he said.

“We were kind of working on this anyway when these just popped up around town,” he said. “We didn’t realize that it was going to start happening so fast.”

The state statute says “local authorities” can regulate electric scooters. Whether that includes the University of Arkansas isn’t defined.

“The U of A is in the early stages of studying how the law applies to a state entity like the university, and what our options are under the law when it comes to regulating scooters,” said Steve Voorhies, university spokesman.

Little Rock began a pilot program in January with Lime. Shortly thereafter, city leaders sent a letter to the company stating its disappointment in the handling of rider safety and that it wouldn’t renew the contract with Lime. The city ended up extending the contract in May, so it will last through September. In the meantime, city officials are working on an ordinance regulating the devices.

Electric scooters serve as an effective transportation device and not just a novelty item, said Andrew Miles, manager of Fayetteville’s VeoRide bike share program. They work as an alternative to biking because they’re self-propelled, so users don’t have to exert themselves, he said.

Most importantly, the scooters help get cars with a single occupant off the road, Miles said. People who live a relatively short distance from their destination might opt for a scooter instead of a car, he said. The devices can get riders to the first and last mile of a bus route, for instance.

VeoRide plans to apply for a permit to operate scooters in Fayetteville, Miles said. 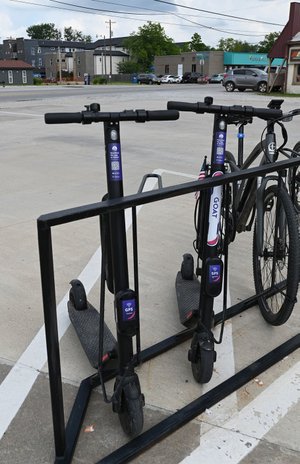 Photo by Spencer Tirey
NWA Democrat-Gazette/SPENCER TIREY Goat Scooters, scooters that are rented by scanning a QR code, are seen on a bike rack outside Heros Coffee and Roastery shop on 8th and A street, Wednesday July 10, 2019 in Bentonville.