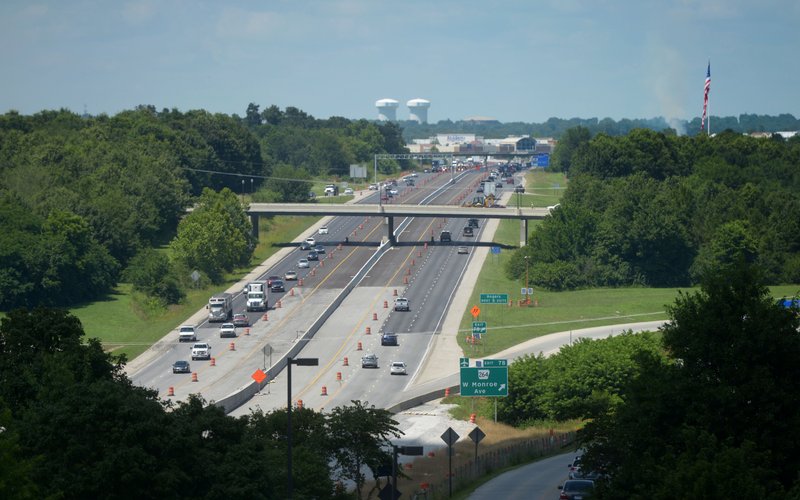 Interstate 49 is shown in this file photo.

FAYETTEVILLE -- Affirma, a technology consultant firm that does business with Microsoft, Kaiser Permanente and others, has set up shop and plans to hire 100 employees in the next five years.

The Washington-based tech company began looking for a second location a year ago to handle engineering duties for clients, said co-founder Mark Mason. Affirma had struggles retaining and attracting talent in Seattle and looked east to set up shop. Mason said the search came down to Austin, Texas, and Northwest Arkansas.

Before visiting Austin, it took one trip last fall for Mason to be sold on the Natural State.

"I came down and fell in love with the area," he said Wednesday before a host of business and elected officials at Affirma's Fayetteville office on Dickson Street. In attendance were Gov. Asa Hutchinson; Sen. Jim Hendren, R-Sulphur Springs; and Arkansas Secretary of Commerce Mike Preston, as well as representatives of the University of Arkansas, Fayetteville; the city; and others.

Hutchinson, an advocate for computer science education in schools across Arkansas, said he saw Affirma's addition as good for the state's economic strength. Agriculture remains the state's leading industry, followed by tourism and manufacturing.

"We have to add technology to the mix," Hutchinson said. "And we are doing that."

"Whether you're looking at Jonesboro, Little Rock or Northwest Arkansas, we have a growth in our technology companies," including homegrown businesses, he said.

Hutchinson has made it a point to bring more technology jobs to the state and prepare young people for those jobs with coding classes in high school. When he first took office, approximately 1,000 students were taking computer science classes in Arkansas, Hutchinson said. Last year, the state reported 6,000. This year, there were 8,000, he said.

"That's a 30% growth in our students that are saying 'We want to be part of the technology future of our state,'" Hutchinson said.

Affirma's Fayetteville office at 641 W. Dickson St. is a three-minute walk from the university's Bell Engineering Center, and acts as a recruitment tool for recent graduates.

"Affirma is bringing something a little different to our area, and that's an opportunity -- an enhanced opportunity -- for our graduates to stay right here in Arkansas and work on world-class projects around the world," said Stan Green of Innovate Arkansas, a state-funded Little Rock firm working with startups.

What began on the West Coast 17 years ago has grown into a global information systems company with offices in Los Angeles, Ireland and India, and clients in the health care, entertainment and technology fields.

Since establishing itself in Northwest Arkansas in March, Affirma has hired 10 employees who work out of Fayetteville and Bentonville. Mason plans to hire 100 software engineering and technology consulting positions in the next five years who, in general, will be writing software for big clients, he said.

"Big companies have really expensive software to maintain and they are housing it in their own data centers and it's 'rusty' for lack of a better word," Mason said. "And we come in and ... move those folks into Microsoft's public cloud. That's the bulk of what we are doing here."

When asked about pay, Paula Wetzel, Affirma's Fayetteville office manager, said it will vary by candidate and likely range between $75,000 and $150,000.

Unlike most companies in the area, Affirma has relationships with others outside the state.

"While I have no doubt that Affirma would like to do business with the three largest companies in Northwest Arkansas," Green said, referring to J.B. Hunt, Tyson Foods and Walmart. "They do not have a contract with them today; they are not coming here in pursuit of business with those companies," he said. "They are coming here because they see a talent pool and a quality of life that they think they can grow their business in."