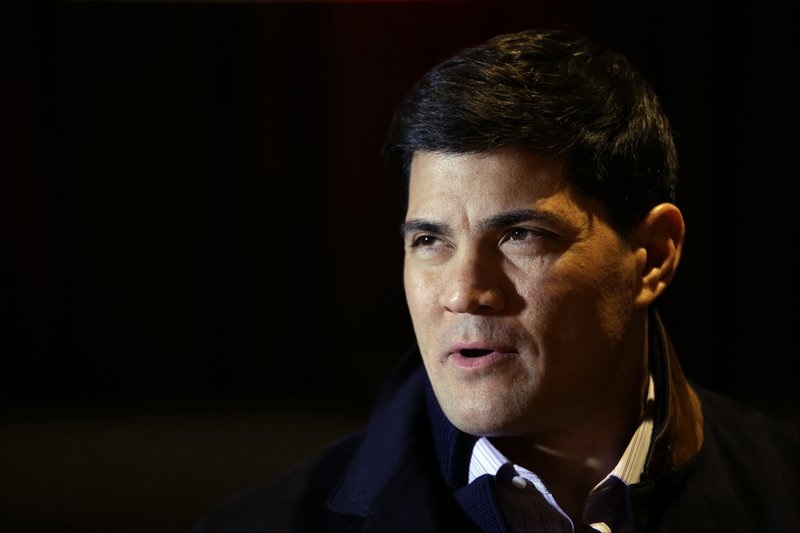 FILE - In this Jan. 29, 2014, file photo, Tedy Bruschi speaks during an interview at the NFL Super Bowl XLVIII media center in New York. Former New England Patriots linebacker and current ESPN analyst Tedy Bruschi is recovering in a Massachusetts hospital after suffering a second stroke. His family says in a statement the 46-year-old suffered the stroke Thursday and immediately recognized the warning signs of arm weakness, face drooping and speech difficulties. Bruschi was admitted to Sturdy Memorial Hospital in Attleboro, where his family said Friday he was &quot;recovering well.&quot;(AP Photo/Matt Slocum, File)

The Los Angeles Lakers and Avery Bradley have agreed to a two-year deal for $9.7 million, his agent, Bill Duffy of BDA Sports, said Monday. Bradley was waived by the Memphis Grizzlies on Saturday. The 6-2 defensive guard will join a Lakers team that now has seven guards. Duffy said the second year of Bradley's deal, which will be the Lakers' room exception, is a player option. Over the course of his nine-year career, the 28-year-old Bradley made his mark as an outstanding one-on-one defender. He was named to the NBA's first-team defensive team in 2016 and the second team in 2013, both times while playing for the Boston Celtics. He started in 49 games last season with the Clippers, averaging 8.2 points per game and shooting 33.7% from three-point range. After Bradley was dealt to Memphis at the trade deadline, he averaged 16.1 points in 14 starts and shot 38.4% from three-point range.

The Atlanta Hawks waited for the NBA free agency frenzy to wane and then made their first move on Monday. The Hawks agreed to a two-year contract with Jabari Parker, the former No. 2 overall pick, according to several people familiar with the situation. The deal is for two years and $13 million, with the second year a player option. Parker, 24, was the second overall pick in the 2014 NBA Draft out of Duke. The 6-8, 245-pounder will see playing time at both small and power forward for the Hawks. Parker is entering his sixth season in the NBA, having spent his first four seasons with the Bucks. After signing a two-year, $40 million with the Bulls as a free agent last year, he was traded to the Wizards in February. The Wizards declined his option last month and made him an unrestricted free agent. Parker has career averages of 15.1 points, 5.7 rebounds and 2.1 assists. He averaged 14.5 points, 6.6 rebounds and 2.4 assists last season between the Bulls and Wizards.

Jerami Grant gives Denver another power forward who can do a little bit of everything. And the Oklahoma City Thunder obtained another first-round pick, which allows them to do a little bit of anything. The Nuggets bolstered their front court by acquiring the 25-year-old Grant from the Thunder on Monday for a 2020 first-round pick. It's an additional first-round selection for the Thunder, who are in line for five more in the blockbuster deal that sent Paul George to the Los Angeles Clippers. The 6-9, 220-pound Grant is coming off a breakout season that saw him set career highs in points (13.6) and rebounds (5.2). He shot 49.7% from the field and 39.2% from three-point range. On the defensive end, he displayed his versatility by blocking 100 shots and recording 61 steals. Originally a second-round pick by Philadelphia in 2014, Grant -- the son of longtime NBA player Harvey Grant -- has taken off since being sent to the Thunder in a 2016 deal. The Nuggets are coming off a 54-28 season that earned them the No. 2 seed in the West behind All-Star big man Nikola Jokic. They haven't made any major splashes this offseason.

Former New England Patriots linebacker and ESPN analyst Tedy Bruschi said he's doing "much better" after suffering a second stroke. In an Instagram post Monday, Bruschi said he knew what was happening immediately Thursday when he lost use of his left arm, began slurring his speech, and his wife noticed his face was drooping. An ambulance took Bruschi to Sturdy Memorial Hospital in Attleboro, Mass. The Instagram post includes a list of the several warning signs of a stroke that should prompt an immediate call to 911. The 46-year-old Bruschi had a stroke in February 2005 days after the Patriots' third Super Bowl victory and learned he had a congenital heart defect that produced a hole in his heart. He retired after surgery but later returned and played three more seasons for the team.

Mitch Trubisky isn't the favorite to win the NFL Most Valuable Player Award, but he's the most popular pick among bettors in Las Vegas. Westgate Las Vegas SuperBook has sold more tickets on Trubisky winning the 2019 MVP, initially at 200-1 odds, than any of his NFL peers, according to Jay Kornegay, vice president of race and sports book operations. Caesars Palace has seen similar action. And the Bears are generating Westgate's most Super Bowl bets, too. Westgate has taken so many Trubisky tickets in the past two weeks that it moved the line to 50-1. The small wagers -- between $20 and $100 -- typically indicate bets made by fans, most likely Bears fans, Kornegay said. "I just want to know what kind of water you guys are drinking up there," Kornegay said. "Is everybody drinking, like, Soldier Field water or something? What the heck is going on up there?" Trubisky represented 17% of the bets placed and 22% of the money wagered on the NFL MVP at Westgate, Kornegay said.

EPERNAY, France -- Julian Alaphilippe won Stage 3 of the Tour de France and took the yellow jersey with a sparkling ride into the Champagne town of Epernay on Monday.

The French rider left the chasing pack for dead with a fierce burst of acceleration on a short, sharp climb amid the Champagne vineyards. He gritted his teeth as he rode alone over the last 10 miles, up Epernay's cobbled Champagne Avenue, and to the lung-busting uphill finish.

It was Alaphilippe's first stage victory at this Tour and third in his career. He also won two stages on the Tour last year.

The previous race leader, Mike Teunissen, couldn't keep up with the main pack in the final section of sharp hills.

Cheered on by thick roadside crowds, Alaphilippe delivered the decisive blow on the Cote du Mutigny, the steepest of four notable hill climbs heading toward Epernay.

He flew up the final part of the 12% incline, seemingly surprising other pretenders for the prestigious stage victory in the town that houses some of France's most famous producers of bubbly.

But as the pack reacted and laid chase, shrinking his lead, victory for Alaphilippe was by no means guaranteed. Tongue lolling in the heat, the leader of the Deceuninck-Quick Step team battled to keep his pursuers at bay into Epernay, heaving with fans baking in the sun.

By the time he sped past a statue of Dom Perignon, a monk who lent his name to James Bond's favorite brand of Champagne, it became clear Alaphilippe couldn't be caught.

He was overcome with emotion, barely able to speak through tears, at the thought of slipping into the canary-yellow leader's jersey for the first time in his career.

"I gave everything," he said. "This opportunity offered itself up and I had to seize it." 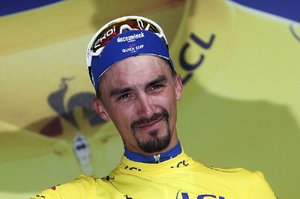