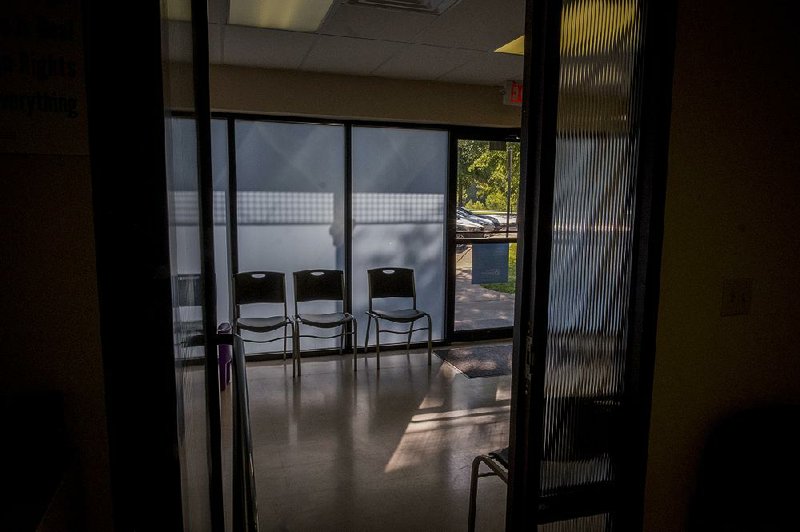 The Planned Parenthood Great Plains clinic in Fayetteville is shown in August.

Planned Parenthood has stopped providing abortions at its Fayetteville clinic while it searches for a new home in northwest Arkansas, its chief executive officer said in court documents filed Friday evening.

The documents notified U.S. District Judge Kristine Baker that the provider of abortions and family planning services is withdrawing, for now, from a joint effort to block the enforcement of a new state law requiring abortion providers to be board-certified in obstetrics and gynecology.

Baker has scheduled a hearing for July 22 on requests for a temporary restraining order and/or a preliminary injunction to stop Act 700 of 2019 and two other new abortion laws from being enforced while their constitutionality is litigated.

Little Rock Family Planning Services, which provides surgical and medication-induced abortions at its Little Rock clinic, is still pursuing the preliminary orders, and Planned Parenthood is expected to rejoin the effort after the Fayetteville clinic relocates, attorney Bettina Brownstein said Monday. She said Planned Parenthood's Little Rock clinic already has two doctors board-certified in obstetrics and gynecology, so Act 700 is only an issue for the Fayetteville clinic.

The other new laws that are being challenged in a lawsuit filed June 26 that is backed by the American Civil Liberties Union of Arkansas are Act 493, which bans abortions in Arkansas after 18 weeks of pregnancy except in medical emergencies and cases of rape or incest, and Act 619, which prohibits abortions based solely on a fetal diagnosis of Down Syndrome.

Brandon Hill, chief executive officer of Planned Parenthood Great Plains, which oversees the business' Little Rock and Fayetteville clinics, cited "increasing problems with our landlord" as reasons for deciding against renewing the current lease, which expires at the end of this month. He said the problems include "managing protester presence in the immediate vicinity of our facility and resultant concerns about patient and staff safety."

For example, Hill said, an anti-abortion "crisis pregnancy center" organization began parking its van in a parking lot next to one used by the clinic. He said staff and patients "were alarmed and distressed by the van's presence, and we were also concerned about medically inaccurate information being directed at patients. Additionally, we feared increased protester visibility could lead to security issues."

Hill said another factor was an arson earlier this year at a Planned Parenthood clinic in Missouri.

He said doctors stopped providing abortions at the Fayetteville health center last week to allow for follow-up visits for medication abortion patients, in accordance with state law, before the center closes.

"Our staff is diligently working to find a new location for the health center in Northwest Arkansas so that we can restart providing services as quickly as possible," Hill said.

"We had previously hoped to restart providing services in a new location with little or no disruption in access to patients," Hill said. However, he said, the right spot has been difficult to find, "in part because some landlords are unwilling to rent to Planned Parenthood in light of the ongoing high-profile disputes over abortion."

He said Planned Parenthood is considering leasing or buying a new facility.

"When we reopen a health center in Northwest Arkansas, we plan to provide the same full range of reproductive health care that we have been providing in our current location, including medication abortions," Hill said.