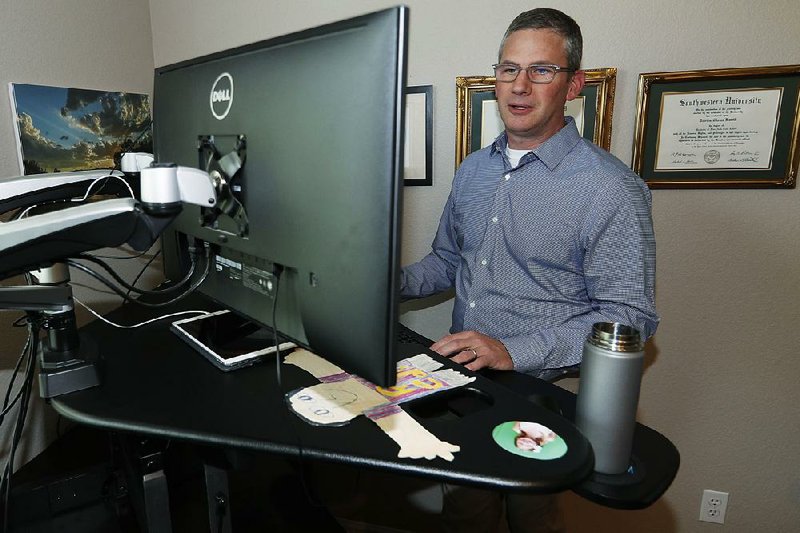 Software manufacturer Joe Wilson works from his home recently in Highlands Ranch, Colo. He says ripple effects from U.S. tariffs mean he might have to delay some hiring.

NEW YORK -- Corri Smith is planning to hire a full-time project manager for her public relations firm and make her part-time assistant full time. But she has a wary eye on the economy.

"It's been a long time since we've had some trouble in the economy. It can't all be wonderful -- something will happen," said Smith, owner of Black Wednesday in Charlotte, N.C.

Smith, who believes an economic downturn is likely in the next 12-18 months, said. "I will be extra cautious with hiring alongside also making plans to stockpile and save revenue." She's aware that marketing is one of the first budget items to be slashed when corporate executives are anxious about profits.

Small-business owners, who have taken the conservative approach to hiring during the economic expansion, are becoming even more careful over concerns that the economy is weakening. They're well aware that economists believe the country's gross domestic product slowed considerably in the second quarter -- forecasts give the GDP an annual rate of about 2%, down from 3.1% in the first quarter. Owners' concerns and caution are increased by trade tensions.

Some owners are cutting jobs, likely by not filling their open positions as well as by laying off workers. A report from payroll processor ADP released last week showed that its business customers with up to 49 employees cut 23,000 jobs in June on top of a 38,000 reduction in May; this is the first time ADP has reported job cuts since September 2017.

So far this year, small businesses have added about 25,000 jobs on average each month, compared with an average 52,000 last year and 56,000 in 2017. Their hiring pace has lagged behind that of larger companies, which have fed the hiring boom in the country the past few years.

Although the latest recession ended 10 years ago, small-business hiring never recovered to the levels before the downturn began in 2007. Owners who had laid off workers didn't want to go through that devastating process again, and new entrepreneurs learned from the unhappy experiences of others.

Hiring is an ongoing balancing act for Scott Fish and business partner Sonja Skvarla, co-owners of Off Road, a business consulting firm in Portland, Ore.

"Businesses are charging ahead, but there is a small element of uncertainty in the economy, and we are noticing that it continues to be on the minds of business owners," Fish said.

So although Fish and Skvarla are considering hiring as many as five employees over the next year, they're also treading carefully, hoping that their hiring is in sync with the work clients have for them.

"It's a chicken-before-the-egg thing -- do you have enough clients to support the cost of hiring someone great, or do you hire some great people and hope the revenue comes in," Fish said.

Ethan Segal's decision to hire freelancers for his Internet marketing firm was based partly on the economy. After the Federal Reserve raised interest rates in December, some of his largest clients put their projects on hold.

"All of them decided to table not just my work but other companies' as well. It was shocking and sudden," Segal said. There are currently about 10 freelancers working at Segal & Co. in Philadelphia

Many small businesses also struggle to find qualified workers. While that can be a problem for companies of all sizes, small businesses generally can't offer the salaries and benefits that big corporations do, and with an economy that's looking iffy, the smaller players are at an even greater disadvantage.

Because of competition for workers from giants like Google, Facebook and Netflix, not only does software maker Gunner Technology not expect to hire in the next year, "we are looking at how we can get by without replacing employees we are sure to lose," CEO Cody Swann said.

Swann's solution is to automate some of the work that software developers generally do at his Las Vegas company, like reviewing software coding to detect errors.

The tariffs that President Donald Trump's administration has placed on thousands of products imported from China and retaliatory duties placed on U.S. goods are affecting many small businesses, even if they're not importers or exporters. Software manufacturer Joe Wilson might have to put off hiring freelancers if he feels the ripple effects of tariffs that his customers must pay.

"These issues impact the economy and people's confidence in the economy. It's easy for a business to defer spending money on a software project for a couple of quarters if they are worried about these things impacting their sector," said Wilson, owner of Volare Systems in Highlands Ranch, Colo.

Wilson uses freelancers because his work often involves customers' projects rather than their ongoing needs. He has three now, and hopes to hire two to five more in the next six months to a year -- as long as the economy and/or tariff issues don't slow his business.

Even what looks like robust hiring can be conservative. At GreenDropShip.com, a company that provides distribution services for small online retailers, managing director Allen Kaplun is considering hiring as many as 20 people over the next six months, adding to his current staff of 70. But Kaplun said he's not going on a hiring spree because "we're certainly concerned about the economy."

GreenDropShip.com's revenue is growing by 50% a year, while the staff additions Kaplun plans for the Denton, Texas, company amount to about 30%.

"Based on our business model, that's pretty cautious behavior," he said.