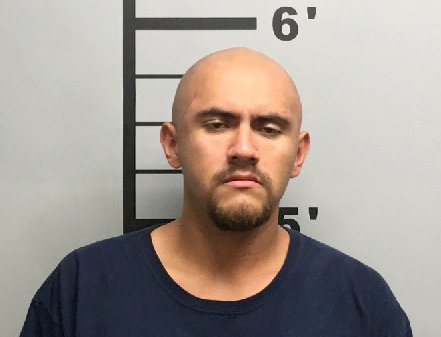 GENTRY -- Luis Fernando Salinas, 27, of Gentry, was arrested Friday after a gun went off outside a residence.

Officers responded to 104 S. Little Ave. for a disturbance call involving weapons at approximately 5:30 p.m. Friday, according to a news release from the Gentry Police Department. Dispatchers told officers gunshots had been fired and there were possible injuries.

Police found an unconscious female lying in the driveway and determined she fainted when a gun went off, the release states.

According to the release, witnesses told officers there had been an altercation between adult siblings at the residence and Salinas pulled a handgun and pointed it at his sister, Blanca Gomez. Tomas Gomez, their brother, tackled Salinas and tried to wrestle the gun away from him, the release states. At some point, the gun was dropped and fired when it hit the ground.

"Nobody was hit by the bullet, but everyone immediately took cover," the release states.

Police said Salinas picked up the gun and ran from the scene.

Officers briefly searched the area before finding Salinas at his apartment at 117 S. Little Ave., according to the release.

"After several failed attempts to make contact with Salinas by knocking on doors and windows of the apartment, Benton County SWAT team was requested to come to the scene," the release states. The SWAT team entered the apartment and took Salinas into custody without incident.

Salinas was arrested and taken to the Benton County Jail, where he was being held Saturday without bond in connection with two counts of aggravated assault on a family or household member, possession of firearms by certain persons, interference with emergency communications, obstructing governmental operations and a parole violation.