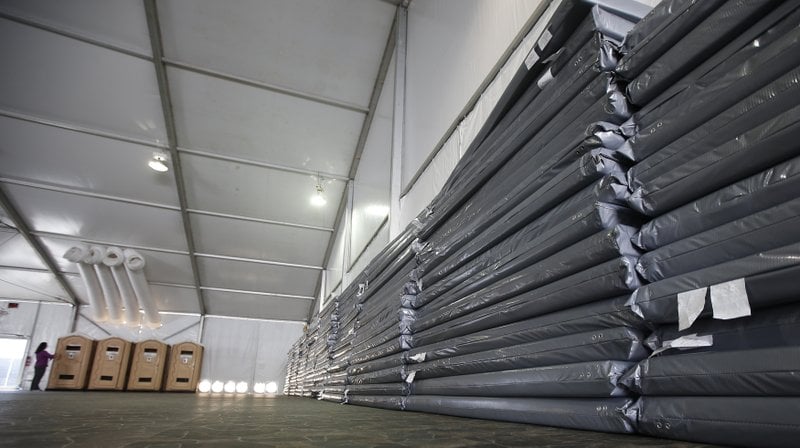 In this Friday, June 28, 2019, file photo, temporary mattress pads are stacked up along a tent wall with restroom facilities in the background, as the U.S. Border Patrol unveiled a new 500-person tent facility during a media tour in Yuma, Ariz. (AP Photo/Ross D. Franklin, File)

Mounting revelations about squalid and dangerously crowded conditions at Border Patrol holding centers have fueled public anger heading into the Fourth of July weekend, with protesters taking to the streets and social media to decry the situation as un-American and unacceptable.

The protests over President Donald Trump's immigration policies come as the administration said Wednesday that it is looking for more properties to permanently hold unaccompanied children who cross the border. Jerry Gonzalez, executive director of the Georgia Association of Latino Elected Officials, called that troublesome given the government's "track record on abuses and child neglect that we have seen nationally." Atlanta is one of five potential locations for new facilities to hold up to 500 children.

"I don't think that this administration is capable of administrating a program in a humane way," Gonzalez said.

Images made public in past days and weeks have served as a reminder for Americans of a crisis at the southern border: A migrant father and daughter drowned in the Rio Grande. Reports that infants, children and teens have been locked up without adequate food and water. Revelations that five children have died in Border Patrol custody since December.

The Homeland Security Department's internal watchdog provided new details Tuesday about severe crowding in Texas' Rio Grande Valley, the busiest corridor for illegal crossings, noting children at three facilities had no access to showers and that some children under age 7 had been held in jammed centers for more than two weeks. Some cells were so cramped that adults were forced to stand for days on end.

The report echoed findings in May by the department's inspector general about holding centers in El Paso, Texas: 900 people crammed into a cell with a maximum capacity of 125; detainees standing on toilets to have room to breathe; others wearing soiled clothing for days or weeks.

Hundreds have protested this week from Rhode Island and Vermont to Texas and California, as cries to #CloseTheCamps take root on social media. About 50 demonstrators from a Jewish group congregated Wednesday outside a jail in Orange County where immigration detainees are held. Some locked arms and blocked the facility's entrance. Then they sang and prayed for migrant children who have died in government custody.

Still more demonstrations were planned for the July 4 holiday, including one organized in Philadelphia by Jewish activists likening the detention of migrants to the treatment of Jews in Nazi Germany.

Trump said Wednesday that Border Patrol agents are "not hospital workers, doctors or nurses" and again blamed Democrats for rejecting his proposals to fix the immigration system.

"If illegal immigrants are unhappy with the conditions in quickly built or refitted detention centers, just tell them not to come. All problems solved!" the president tweeted.

Customs and Border Protection reported in mid-May that it had 16,000 people in its custody, many in cells equipped with nothing more than concrete benches and an exposed toilet. Immigration and Customs Enforcement, whose facilities are built for longer-term detention, houses more than 40,000 people.

When government inspectors visited the Rio Grande Valley last month, the Border Patrol had some 8,000 detainees in custody in just five holding facilities, with 3,400 held longer than the 72 hours generally permitted. More than 800 children had been in the facilities for longer than 72 hours, with many there more than a week.

At that same time, longer-term Immigration and Customs Enforcement facilities, to which detainees are supposed to be moved, had some 54,000 beds occupied nationwide, though it is funded only for 42,000.

"We are concerned that overcrowding and prolonged detention represent an immediate risk to the health and safety of [Homeland Security] agents and officers, and to those detained," the inspector general's report states. Included were photos showing women and children, including an infant in diapers, piled shoulder to shoulder on the floor of one holding pen. Another photo showed 88 men crammed into a cell meant for 41, with one pressing a cardboard sign to a window reading: "Help, 40 Days Here."

On Monday, Trump signed legislation to provide $4.6 billion aimed at improving conditions. And the Department of Health and Human Services, which takes custody of unaccompanied children from the Border Patrol, said Wednesday that additional holding sites are being assessed in and around Atlanta, Phoenix, Dallas, Houston and San Antonio, Texas. The department is seeking 20-year leases for most of the sites, signaling they don't expect challenges to fade.

Information for this article was contributed by Jeff Martin, Amy Taxin and Ricardo Alonso-Zaldivar of The Associated Press.