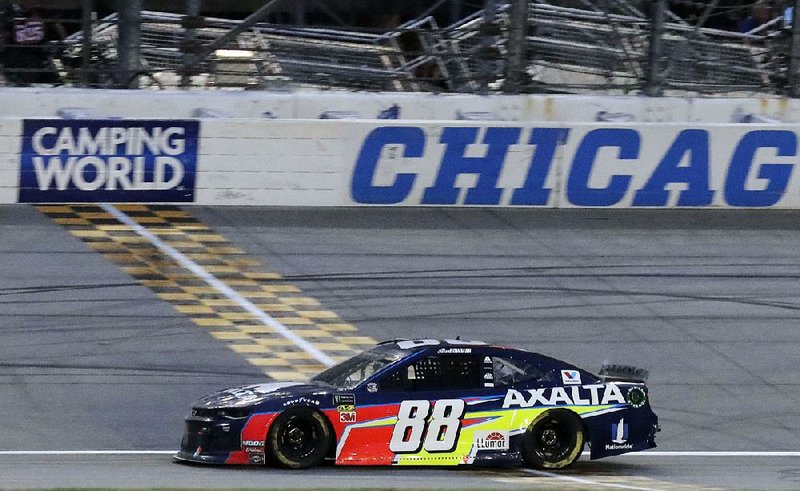 JOLIET, Ill. -- Alex Bowman is part of the club now. That means no more cracks about coming up empty.

He's a winner once again.

Bowman had one of the fastest cars during practice, and the strength of his No. 88 Axalta Chevrolet showed after the race was delayed by a storm. He had just six top-five finishes in 133 starts on NASCAR's top series before his banner day on the bumpy 1.5-mile oval.

Bowman, 26, who won on the Xfinity Series in 2017, took second at Talladega, Dover and Kansas this year, and he was sick of hearing about the hole on his resume. He said even Chad Knaus, William Byron's crew chief, had said something to him.

Those days are over.

"I was just tired of running second," Bowman said. "I don't want to do that anymore. I feel like this is the last box, aside from going and chasing a championship, that I needed personally for myself to validate my career."

Larson put together another memorable run a year after he lost an epic last-lap duel with Kyle Busch on the same track. Larson passed Bowman with about seven laps left, but Bowman quickly regained the lead and smartly navigated his way to the victory.

"He was struggling, and we were able to get to him and get by him, but he did a good job," Larson said. "He did a good job regrouping and figuring out how to make his car drive better."

Joey Logano, who leads Kyle Busch by 18 points for the top spot in the series standings, finished third. Jimmie Johnson was fourth, and Brad Keselowski rounded out the top five.

It was Hendrick's second victory of the season after Chase Elliott won at Talladega in April. Led by Bowman and Johnson, Hendrick placed each of its four cars in the top 11.

"So proud of everybody at Hendrick Motorsports," Bowman said.

Joe Gibbs Racing and Team Penske dominated the first part of the Cup season. Logano, Keselowski and Ryan Blaney finished in the top six for Penske at Chicagoland, but it was a difficult day for the top performers at JGR.

Martin Truex Jr. never really threatened and had to settle for ninth after winning last weekend in California. Kyle Busch had several issues with his car on his way to 22nd.

"Little bit of a tough day, but we soldiered home to a fifth and a sixth in the stages and ninth at the end," Truex said. "When you have a tough weekend, that's a good day to get a top 10."

It was hot and humid when pole-sitter Austin Dillon led the field to the starting line, but thunderstorms quickly rolled in and halted the race after 11 laps. The wind picked up and rain pounded the track after the drivers and crew members retreated to their trailers.

When the race resumed after a delay of more than three hours, it was a completely different situation. The temperature had dropped more than 20 degrees, forcing the teams to adapt on the fly after the cars were set up for hot, slick conditions. It also was the series' first stop at Chicagoland under its overhauled rules package, further complicating matters.

Kevin Harvick and Blaney each had tire trouble about 75 laps in, and Denny Hamlin raced to the Stage 1 win. But Hamlin was penalized for too many over the wall during a pit stop in the last part of the race and finished 15th.

Harvick won Stage 2 and led five times for a race-high 132 laps, but he finished 14th. He remains in search for his first victory this season after he had eight last year.

Blaney has finished in the top 10 in his last three races. He was third last weekend at Sonoma.

Daniel Hemric qualified third for Richard Childress Racing, but finished 19th. He has one top-10 finish this season. 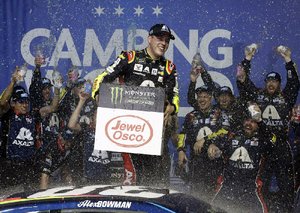