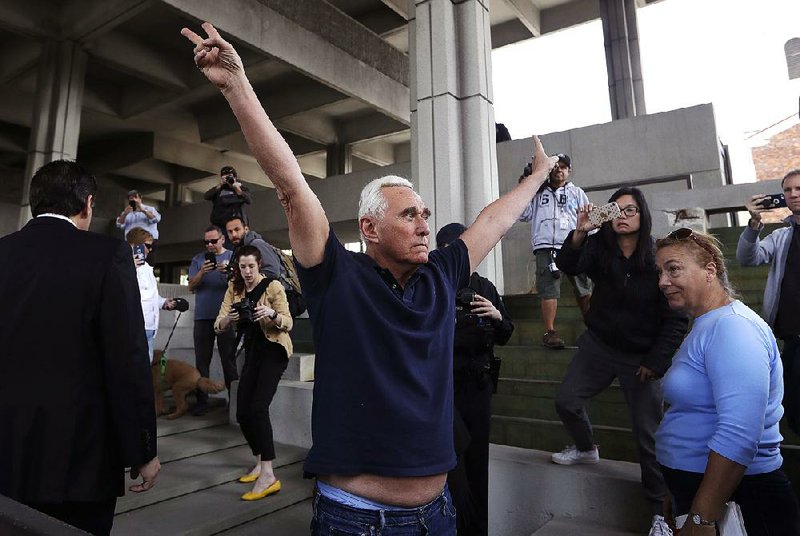 WASHINGTON -- Roger Stone, a longtime informal adviser to President Donald Trump, was arrested by FBI agents early Friday at his home in Florida.

He's accused of lying and trying to tamper with a witness to conceal Stone's efforts during the 2016 presidential campaign to learn about the release of emails hacked from Democrats.

In an indictment unsealed Friday, special counsel Robert Mueller disclosed that a top campaign official in 2016 sent Stone to get information from WikiLeaks about the thousands of hacked Democratic emails.

The effort to find out about the emails began well after it was widely reported that Russian intelligence operatives were behind the theft of them, which was part of Moscow's broad campaign to sabotage the election.

Stone was charged with seven counts, including obstruction of an official proceeding, making false statements and witness tampering. Mueller did not indicate that Stone's interactions with WikiLeaks were illegal, nor that the Trump campaign engaged in a criminal conspiracy with the organization.

FBI agents, with guns drawn and wearing ballistic vests, arrested Stone before dawn at his home in Fort Lauderdale. Agents typically use such tactics as a precaution to secure possible evidence and protect themselves in case a suspect becomes violent.

Prosecutors had kept details of the case quiet because they feared that public disclosure would increase the risk of Stone fleeing, or destroying or tampering with evidence, according to court documents.

Also Friday, FBI agents were seen carrying hard drives and other items from Stone's apartment in New York City, and from his recording studio in south Florida.

Stone, whose ankles and wrists were shackled, appeared briefly Friday morning in U.S. District Court in Fort Lauderdale. The courtroom was packed. Stone, known for his dapper wardrobe, wore a navy-blue cotton polo shirt, bluejeans and his trademark round, black-rimmed glasses. His demeanor was flat.

He posted a $250,000 bond, was ordered to surrender his passport and agreed to appear in federal court in Washington later.

In the courthouse, Stone told The Washington Post that he played no intermediary role between Trump's presidential campaign and the anti-secrecy group WikiLeaks, which published the hacked emails. He also denied that any campaign official asked him to reach out to the group, as Mueller has alleged.

Stone said he and Trump "never discussed any of these matters."

Prosecutors, he said, "obviously think I'm the O.G., but I'm not," referring to a slang expression for "original gangster."

Afterward, outside the courthouse, Stone vowed to fight the charges, which he called politically motivated.

"There is no circumstance whatsoever under which I will bear false witness against the president, nor will I make up lies to ease the pressure on myself," he told reporters.

"I look forward to being fully and completely vindicated. I will not testify against the president because I would have to bear false witness."

In a brief interview later Friday, Stone said he will plead innocent to the charges. "We're anxious to see" the government's evidence, he said, adding that Mueller's team "essentially manufactured process crimes" and showed no proof that WikiLeaks passed material to him for the campaign.

Stone is the sixth Trump aide or adviser charged by Mueller and the 34th person charged overall in Mueller's investigation into Russia's interference in the 2016 election and possible coordination with Trump campaign associates.

The nearly 2-year-old investigation has exposed multiple contacts between Trump associates and Russia during the campaign and transition period, and revealed efforts by several to conceal those communications.

The 24-page indictment takes the investigation even further into the president's circle of advisers and suggests that Trump campaign officials sought to exploit the stolen messages for political gain.

But prosecutors did not accuse Trump of wrongdoing or charge Stone with conspiring with WikiLeaks or with the Russian intelligence officers who Mueller says hacked the emails.

Instead the prosecution mirrors other Mueller cases in alleging cover-ups and deception, accusing Stone of lying to lawmakers about WikiLeaks, tampering with witnesses and obstructing a House intelligence committee inquiry into whether the Trump campaign coordinated with Russia to tip the election.

Friday's indictment is the first in months by Mueller. Citing details in emails and other forms of communication, the indictment suggested that Trump's campaign knew about some stolen emails before they were released and asked Stone to find out about them.

According to the indictment, between June and July of 2016, Stone told "senior Trump campaign officials" about the stolen emails in WikiLeaks' possession that could be damaging to Democratic candidate Hillary Clinton. On July 22, WikiLeaks released its first batch of Democratic emails. After that, according to the indictment, the Trump campaign sought more.

"A senior Trump campaign official was directed to contact Stone about any additional releases and what other damaging information Organization 1 [WikiLeaks] had regarding the Clinton campaign," the indictment said.

The indictment does not name the official or say who directed the outreach to Stone.

Though no officials are identified by name, one Trump campaign aide cited in the case is Steve Bannon, who later became Trump's chief White House strategist. Bannon, referred to as a "high-ranking Trump Campaign official," exchanged emails with Stone in October 2016 about WikiLeaks' plans. The indictment quotes from those emails, which had previously been made public by news outlets.

While the indictment provides some new insight into the Trump campaign, it deals largely with what prosecutors say were Stone's false statements about his conversations with conservative writer and conspiracy theorist Jerome Corsi and New York radio host Randy Credico.

The indictment accuses Stone of carrying out a "prolonged effort" to keep Credico from contradicting Stone's testimony before the House intelligence committee. During that effort, prosecutors note that Stone repeatedly told Credico to "do a 'Frank Pentangeli,'" a reference to a character in The Godfather: Part II who lies before Congress.

Stone is accused of threatening Credico, including through messages in which he called him a "rat" and "stoolie," and accused him of backstabbing his friends. Stone also threatened to "take that dog away from you," a reference to Credico's dog, Bianca.

"I am so ready. Let's get it on. Prepare to die [expletive]," Stone also wrote to Credico.

Stone did not immediately respond to requests for comment, but when previously asked about whether he may have lied to Congress, said: "I don't think any reasonable attorney who looks at it would conclude that I committed perjury, which requires intent and materiality."

Stone has said for months that he was prepared to be charged, though he has denied any wrongdoing. A grand jury had heard from witnesses connected to Stone. The intelligence committee voted to release a transcript of Stone's testimony to Mueller as a precursor to an indictment.

Stone has publicly denigrated the Mueller investigation and echoed the president's descriptions of it as a witch hunt.

But he has long attracted scrutiny, especially because of a 2016 tweet -- "It will soon [be] Podesta's time in the barrel" -- that appeared to presage knowledge that Clinton campaign chairman John Podesta's emails would soon be released. Stone has said he had no inside information about the contents of the emails or the timing of when they'd be released.

In a tweet Friday, Podesta turned Stone's words against him, writing that it is now "Roger's time in the barrel."

Stone has said he learned from Credico that WikiLeaks planned to disclose the emails. Stone also has spoken openly about his contacts with Corsi.

Credico hasn't been accused of any wrongdoing. Last year, Mueller's prosecutors offered a plea agreement to Corsi that would have required him to admit that he lied about discussing WikiLeaks with Stone. He rejected the offer and denied that he lied.

"The charges brought against Mr. Stone have nothing to do with the president," she told CNN. Asked whether he directed a campaign aide to contact Stone about the WikiLeaks emails, she repeated that the charges did not involve the president.

Jay Sekulow, one of the president's personal lawyers, dismissed any ties between Russia and the Trump campaign. "The indictment today does not allege Russian collusion by Roger Stone or anyone else. Rather, the indictment focuses on alleged false statements Mr. Stone made to Congress," he said in a statement.

On Friday, Trump returned to an oft-repeated talking point suggesting that the special counsel's investigation -- and news media coverage of it -- is biased. "Greatest Witch Hunt in the History of our Country! NO COLLUSION!" he wrote on Twitter. "Border Coyotes, Drug Dealers and Human Traffickers are treated better. Who alerted CNN to be there?"

CNN was the only media outlet with a reporter outside Stone's home during Friday's raid.

"Another false statement case? God almighty," Trump's lead lawyer Rudy Giuliani said in an interview Friday morning, when asked what the indictment revealed about the special counsel. "I thought they were taking all this time with Stone to try to develop something on him, not to have a lot about 'I don't remember this' or 'I don't remember that.'"

Giuliani added, "They do have some alleged false statements and I don't want to minimize that. That's not right, you shouldn't do that. But there is no evidence of anything else but false statements. The president is safe here."

Giuliani said he spoke with Trump about the indictment Friday morning but declined to describe that conversation, other than to say the president was not nervous about the development.

Giuliani declined to discuss the indictment's mention of a Trump campaign official being directed to contact Stone and said he wanted to read the document carefully before responding.

The indictment does not mention whether Stone or any other Trump associate knew about the Russian operatives' plans before the Russians hacked the Democrats.

As Mueller's investigators interviewed witnesses and reviewed documents, they sought to answer that question, according to two people briefed on the inquiry. To make a case that Trump's associates conspired with the Russians, the investigators indicated, they needed to show that the associates knew about the hacking in advance -- knowing about the fruits of what Russia stole was not enough, the people said.

A self-described dirty trickster, Stone got his start in politics working for President Richard Nixon's 1972 re-election campaign and has a tattoo of Nixon on his back. He has spent decades working to influence American election campaigns and has long maintained that he had no connection to Russia's attempts to disrupt the 2016 presidential election.

Stone has said publicly that he was in contact with WikiLeaks and suggested on Twitter that additional damaging information would be coming.

But the special counsel's investigators spent months encircling Stone, renewing scrutiny about his role during the 2016 presidential race. Investigators interviewed former Trump campaign advisers and several of his associates about Stone's fundraising during the campaign and his contacts with WikiLeaks.

Three senior Trump campaign officials have told Mueller's team that Stone created the impression that he was a conduit for inside information from WikiLeaks, according to people familiar with their witness interviews. One of them told investigators that Stone not only seemed to predict WikiLeaks' actions but also took credit afterward for the timing of its disclosures that damaged Clinton's candidacy.

In October, Stone exchanged emails with Bannon, who at the time was the chief executive of Trump's campaign. In one exchange, Stone wrote that more WikiLeaks disclosures were forthcoming, "a load every week going forward," according to the indictment. Bannon appears to be the official described in the court document as "the high-ranking Trump Campaign official," based on previous disclosures about the email exchange.

A day before Stone and Bannon emailed about WikiLeaks, Donald Trump Jr. exchanged Twitter messages with the WikiLeaks Twitter account and asked, "What's behind this Wednesday leak I keep reading about."

At the end of that week, on Oct. 7, WikiLeaks released more than 6,000 emails related to Podesta. 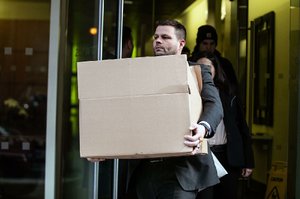