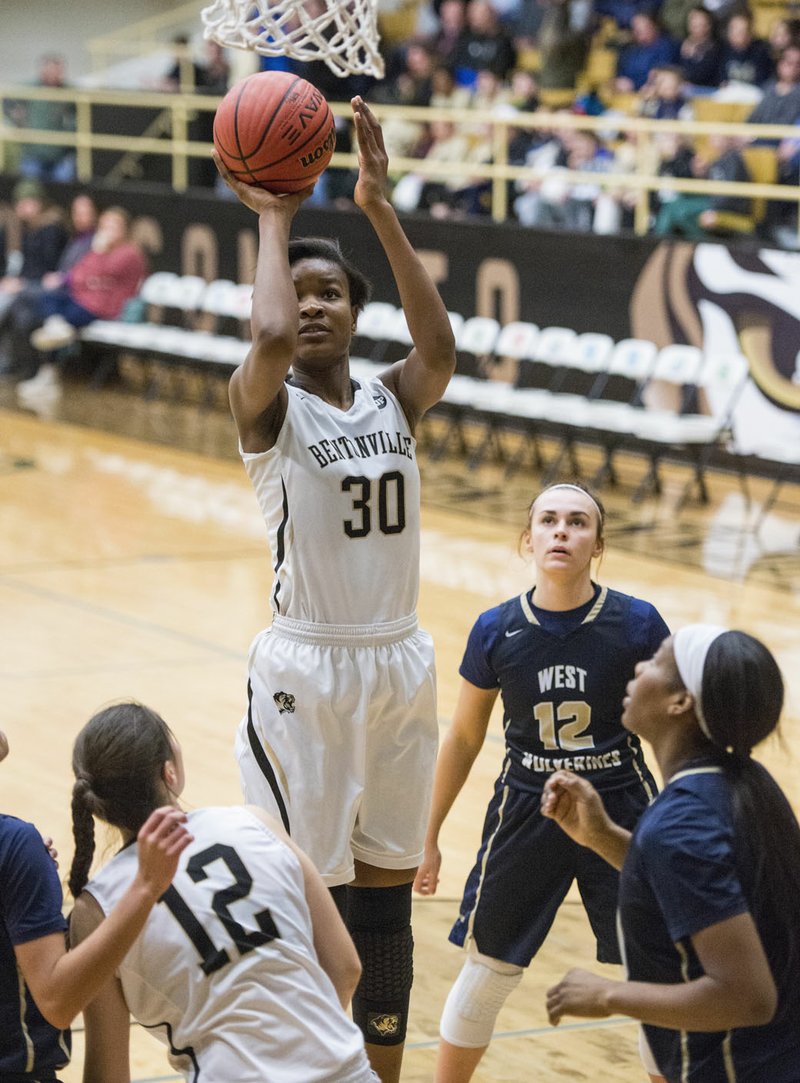 BENTONVILLE -- Even after a 70-point performance in a win over Springdale, Bentonville High's girls had more than enough offensive firepower to spare Friday night.

Maryam Dauda scored 22 points to lead a trio of Lady Tigers in double figures as Bentonville closed out the first half of 6A-West Conference play with a 63-29 romp of Bentonville West in Tiger Arena.

"I was a little concerned going in because we played so well Tuesday night," Bentonville coach Tom Halbmaier said. "It was going to be tough to repeat that, and I thought our girls came really, really close.

"The girls were very unselfish and passed the ball around, and they played without the ball. They were really aggressive, and with this being a rivalry night. I was really proud of them."

Bentonville (17-3, 6-1) briefly trailed 3-2 after an Anna Kash 3-pointer in the opening minute, but that lasted only 17 seconds. Avery Hughes' bucket started a string of nine unanswered points, with Natalie Smith's pair of 3-pointers giving the Lady Tigers a 12-3 lead with 5 minutes, 10 seconds left in the first quarter.

Dauda, the 6-foot-4 sophomore post, took control of the offense in the second quarter with 10 points as Bentonville owned a 30-17 halftime cushion. The Lady Tigers then blew the game open when they started the second half with 16 unanswered points -- nine by Hughes -- and stretched their lead to a 46-17 margin midway through the third quarter.

"They shot the ball extremely well," West coach Randy Richardson said. "It's hard to guard them. They have Maryam inside, and you're trying to double on her; then they're firing 3-pointers. They hit those 3s in the third quarter.

"Bentonville is just a good team. I'm proud of what our girls have accomplished so far, but hats off to Tom and his staff. They have a good squad."

Sasha Goforth and Coriah Beck combined for 42 points, and the Lady Bulldogs took over in the third quarter to remain unbeaten in the 6A-West.

Fayetteville (14-2, 7-0) led just 25-24 when Beck and Goforth took control. The Lady Bulldogs' juniors scored a combined 13 points to fuel a 15-2 run, and Fayetteville was never threatened the rest of the way.

"We were settling early and trying to shoot a lot of 3s," Fayetteville coach Vic Rimmer said. "I didn't think we were attacking the run and too 3-pointer conscious. And we were not offensive rebounding in the first half, and we got several offensive rebounds in the third quarter, and I thought that was the difference."

Caylan Koons scored 21 points for Har-Ber (8-12, 1-6). She scored 10 of Har-Ber's first half points including 8 in the first quarter. Koons hit a pair of early 3-pointers, and her drive in the second quarter gave the Lady Wildcats 20-19 lead.

Chloe Joyner hit a pair of 3-pointers in the second quarter for Har-Ber.

The Lady Mounties held the Lady War Eagles without a field goal for more than 14 minutes and rolled in the second half to the 6A-West Conference road victory on Friday night at War Eagle Arena.

Danielle Dickerson's basket with 6 minutes, 34 seconds left in the fourth quarter was Heritage's first of the second half to get the Lady War Eagles (4-15, 0-7) within 42-20.

"I thought we just stayed really steady; I didn't think we flinched," Rogers coach Preston Early said. "They came out real hot in the first quarter, hit their first few shots. I just like the way our kids stayed the course.

"We kept making things hard. Our players know how hard it is to play over here and win, and I just thought our persistence was big. I thought we really got after it and kinda smothered them defensively. I think it was big. It really turned the tide."

Courtney Story led all scorers with 14 points, while Amber Covington added 11 for Rogers off the bench. Ally Figenskau added nine points and 10 rebounds. Heritage, which trailed only 21-16 at halftime, did not have a player reach double figures.

Van Buren (10-10, 3-4) turned the tide in the second half, outscoring visiting Springdale by 12 after the break en route to a 6A-West Conference victory.

"We all just seemed to hook up together tonight, especially on the offensive end," Miller said. "We knew we had to pick up our offense and have less turnovers for sure, and I thought we were able to that."

Springdale's Jeniya Gause equaled the challenge, scoring all 11 of the Lady Bulldogs third-quarter points and finishing with a game-high 17.

A three from Gause cut the lead to five heading into the fourth. But the Pointers began the final stanza on a 7-2 run to go ahead 42-32 with 2:20 remaining

Rylee Ryan scored a team-high 14 for the Pointers, while Kayleigh Evans hit four three-point field goals to finish with 12.

Print Headline: PREP BASKETBALL: Bentonville's offense too much for West