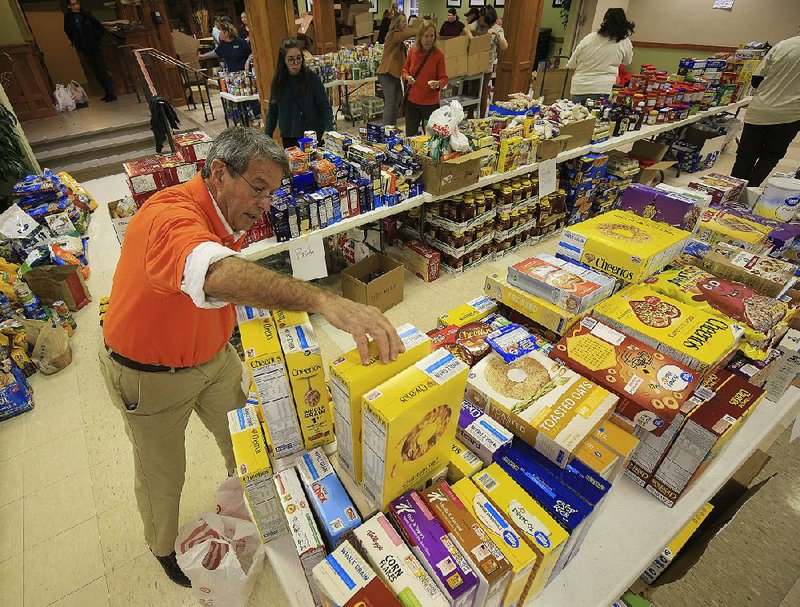 Gordon Garlington works with other volunteers Wednesday sorting food donated for the Little Rock Cares federal workers donation drive at First United Methodist Church in Little Rock. The items collected are to be given out Friday to federal employees at Bill and Hillary Clinton National Airport/Adams Field.

Food and other items collected for unpaid federal workers and contractors will be distributed Friday morning from a cargo building at the Little Rock airport.

The food is available to any workers or contractors who can provide identification showing they work for the federal government, Shane Carter, the spokesman for Bill and Hillary Clinton National Airport/Adams Field, said Wednesday.

The food will be distributed beginning at 9:30 a.m. at the cargo building at 1000 Temple St. Airport Drive turns into Temple Street just past the entrance to the terminal.

More than 25,000 pounds of food have been collected as part of the Little Rock Cares initiative, which began as a way to help U.S. Transportation Security Administration security personnel at Clinton National. About 100 people from the agency are working at the airport through the partial federal government shutdown, which began Dec. 22.

About 800,000 federal employees in the United States are expected on Friday to miss their second paycheck covering a two-week period.

Volunteers from First United Methodist Church in downtown Little Rock, the United Way, the Hunger Relief Alliance, the Arkansas Foodbank, the Clinton Presidential Center and some federal workers spent Wednesday at the church sorting and boxing the food and other items for delivery to the "mini grocery store" at the cargo building, Carter said.

Food donations as well as gift cards will be accepted at the airport through Friday, at which point Little Rock Care organizers will decide what to do next, he said. Bins are located outside the passenger terminal for drop-off, or people can call the airport at (501) 372-3439 to arrange collection if the donation is a large one, Carter said.

Meanwhile, a Federal Employee Emergency Fund has been established through the Arkansas Community Foundation to provide grants to federal workers in Little Rock for expenses such as child care and medicine.

The grants are from tax-deductible donations made through the foundation. Donations can be made online at arcf.org/feef.