Brains and a beautiful voice 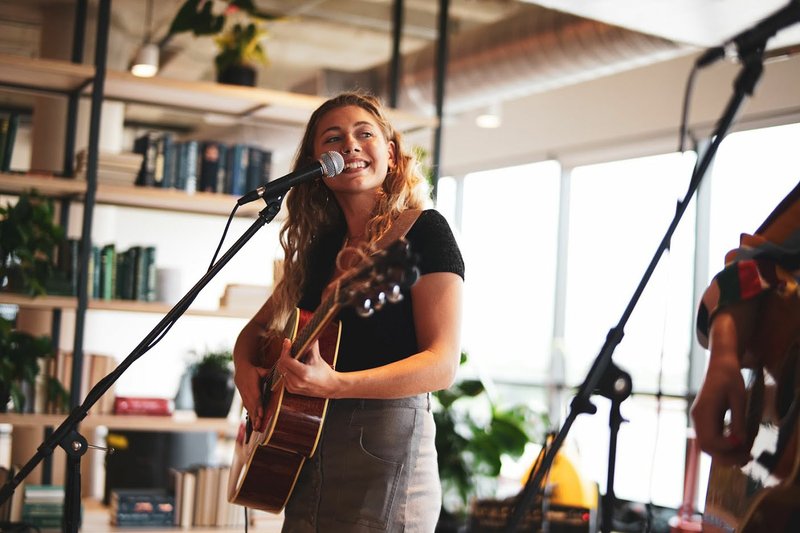 Photo Courtesy Sofar Austin Ashtyn Barbaree "works very hard. She's motivated and has a lot of energy and it would be a shame if she didn't get a chance to go to and share what she does with the rest of the world." -- Graham Weber, manager/artistic director for House of Songs.

Ashtyn Barbaree's wide smile, facility with a ukulele and beautiful singing voice are familiar to anyone who regularly visits the Fayetteville Farmers' Market on Saturday mornings. Since 2011, she's been playing with a group of like-minded friends that call themselves Farmer and the Markets. Barbaree and bandmates Philip Shepherd, Jackson Lefargue and Cody Nielsen are known for their upbeat covers and tight harmonies. By 2014, they had gotten so popular that they were playing the Fayetteville Roots Festival, the Block Street Block Party and First Thursdays. The same year, they released an album, Alphabet Soup.

Now 22, Barbaree is ready to branch out on a solo career: Her song writing and distinctive voice take center stage on her self-titled solo album, released in April of last year.

Ashtyn Barbaree is one of the hardest working musicians in Northwest Arkansas — and here are her engagements for the next two weeks as proof. Check her Facebook page for more information.

The House of Songs Ozarks recently announced that Ashtyn Barbaree will be one of seven musicians the organization will host in February for a week of songwriting and recording of their newest creations at Haxton Road Studios. The week will culminate in the group — which includes Barbaree, Willi Carlisle, Ordinary Elephant, Ali Holder, Megan Palmer and Nick Nace — traveling north to Montreal for the Folk Alliance International Feb. 13-17.

It may seem as though things are moving fast for Barbaree, but it's a direct result of how hard this tenacious talent has worked during the last decade. She graduated from high school a year early, started her studies at the University of Arkansas when she was just 16 years old and graduated in four years, all while averaging around 300 gigs a year. That path seems fitting, since education and music were two things that were emphasized throughout her childhood. Barbaree was raised by a single mom who studied engineering while Barbaree was a toddler.

"I went to all of her classes with her," says Barbaree. "Recently, when I graduated, I realized I had the same adviser that she did. All of these professors knew me because I would play LEGOs before her classes."

Barbaree performed in public for the first time for the school talent show when she was in second grade: She played the small guitar her mother had bought for her, with her favorite teddy bear sitting in a chair opposite her.

"I have really fun memories of [my mother] writing little songs that had my name in them as a kid, lullabies and stuff," remembers Barbaree. "She would play guitar and sing. All of her friends would come over, and there would be instruments all over the house that I could play with. I never had a television, and we didn't have Internet -- we finally got dial-up when I really needed it for school and for [someone my age], that's really weird. But I think not having a television [was a reason] I really got into music and math."

Barbaree also started writing songs at a very early age. She recently came across an old CD that her mother had made of her singing some songs she wrote when she was 5 or 6.

"They were awful," she says, laughing. "They were kind of like nonsense songs. It was hilarious to hear it."

Her mother, says Barbaree, was "unconventional" and encouraged her to expand her horizons whenever possible.

"She would give me really interesting tasks," she says. "Like, in the summers in elementary school, one of the things she had me do was read every religious text and memorize one quote from each one. Just random, kind of strange activities that would branch us out, help make us more open-minded."

The tasks were effective: Barbaree was a high-performing student who was intellectually curious. Just one example was her participation in the Ozarka Orkestra starting in 2014. This 15-person band had a focus on Balkan and Turkish folk music.

"I played flute in it, and I sang in Turkish, Albanian and Greek languages," she says. "One of my best friends growing up, Joey [Largent], was doing Middle Eastern studies, and he was very into learning about different cultures in a very respectful way. So we would learn traditional songs that had stories to tell. We did a show here at the library where we would play these traditional songs and then tell the back story about them."

Though she was extremely active in the local music scene by the time she was a junior in high school, she didn't let that interfere with her academics. She finished a year's worth of senior English assignments in the spring semester and headed off to the university a full year earlier than expected. She loved music, but she also loved math and science -- interests that were, perhaps, inherited from her engineer mother and neuroscientist father -- so deciding on a major was difficult.

"I was a civil engineering major, and music started picking up quite a bit," she says. "I was feeling like I needed to have a degree and be at a point where I could leave town for bigger shows -- and I kind of panicked a bit. So I went back to my adviser and said, 'What degree am I closest to right now?' Up to that point, I was just taking any class I wanted, because I was so young, and my mom was encouraging that. My adviser said, 'You could have civil engineering in a year or geology in half a year.' So I ended up with a geology degree."

Starting college at 16 and finishing in four years despite an active music career is impressive enough, but it is even more so considering that Barbaree found out in college that she had dyslexia.

"They explained to me that the way I always made good grades is that it was like a fish, swimming really hard, but I had bricks on me," she says. "But I was just working really hard, and that's why I hadn't sunk. I guess I just always put a lot more work into the tasks at school. But I thought that's what everyone else was doing. It didn't catch up to me until my second year of college, and then I just thought, 'How is everyone else doing this?' I was spending eight hours just annotating one paper." Once the diagnosis was made, she was able to start learning different adjustments she could make that would help her manage the learning disability, like using specialty fonts.

"They knew I played music, and they told me, 'You should go sit down at the piano and try to play your sheet music backwards.' And I did it. It was a two-part symphony, a pretty challenging piano piece. And I started playing it backwards, and it sounded really, really creepy, but I could do it! And that was something that was kind of cool about being dyslexic -- something positive about it."

Graduation freed her up to pursue music full time, which paid off in a big way last April, when she went to Nashville, Tenn., to record an album comprising six of her original songs.

"I recorded with some wonderful, experienced musicians," she notes, some of whom have worked with Johnny Cash, Sturgill Simpson and Stevie Nicks, among others. She also recorded a song on the Bike Rack Records compilation CD this past summer. She had booked a few show dates in Europe and was working out the logistics of how to finance a European tour when she was contacted by a group that aims to connect songwriters from all over the world.

"I had heard about her before I went up to Northwest Arkansas to see her play," says Graham Weber, manager/artistic director for House of Songs, which was founded in Austin, Texas, and now has a Bentonville branch. "I heard about her because she was gigging all the time and working very hard. I was very impressed by someone so young being so professional. And then I saw her play, and I thought that her show made it very clear that there was a reason she was working so hard -- it made perfect sense to me. And she's a nice human being, as well, and easy to talk to, and people seem to like her. At the House of Songs, we're very into helping artists who are already helping themselves and are trying to move forward in their career. Any way we can assist in that, we are happy to do so."

House of Songs helped Barbaree seek and receive a grant that allowed her to travel to Europe with her preferred bandmates for a three-week tour. The trip was so successful that she's already booked appearances for a second tour next fall. House of Songs has also helped Barbaree connect and collaborate with other songwriters -- although she says she was initially intimidated by the thought of co-writing songs with another artist.

"When you're writing songs, you're very vulnerable," she says. "I mean, it can be like a stream of consciousness process. When you're trying to figure out a melody, you'll just sing whatever words are going through your head, and it's a very personal deal. I mean, who knows what you're going to say? So it made me feel a little funny to go into it at first."

Her first co-writing session was with another Arkansas native, Bonnie Montgomery.

"What I've noticed has happened on other co-writes is, you'll spend the first hour just talking, getting to know each other and figuring out some overlap in your history that you could write a song about," says Barbaree.

Barbaree also took on the role of coordinator for the House of Songs-sponsored Songwriter Showcase, a once a month event that features both Northwest Arkansas-area songwriters and those from outside of the region.

"I host, and then there are three other musicians up there, and we take turns playing one song for about two hours," Barbaree says. "I just love how we feed off of each other's energy."

With the help of the House of Songs, Barbaree will travel in February to the Montreal Folk Alliance, a gathering of folk artists from all over the world.

Although she's spending more and more time on the road -- and gathering worldwide fans -- Barbaree says she has no plans to give up Fayetteville as a home base any time soon.

"There's something really charming about Fayetteville," she says.

Even though, for the seasoned traveler she is becoming, flying in and out of XNA can be tricky?

"I don't mind," she says with a smile. "I like the challenge of getting back home." 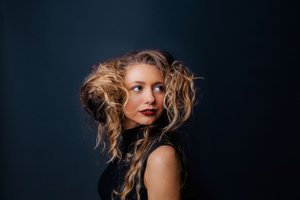 Photo courtesy Ryan Musick Photography "I loved music and I knew I wanted to pursue it," says Ashtyn Barbaree of her drive. "Patience, luck, learning the business from others around me, and a motivation to network allowed me to play so many shows at a young age."