Tenants at Arkansas complex fret after notified rent aid held up; until shutdown ends, full payment up to them, tenants told 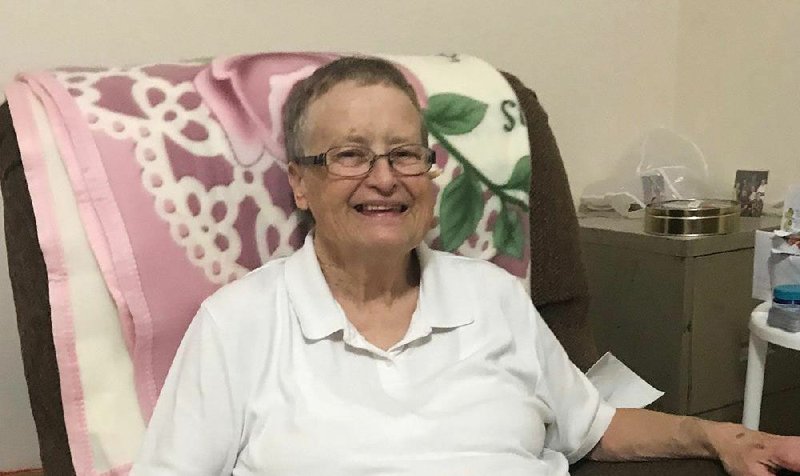 Beverly Taylor, 73, who lives at Kenmont Apartments in Newport, says she can pay her February rent if her subsidy is lost because of the government shutdown but won’t be able to afford groceries or much else. “I’ll just starve to death I guess,” she said.

NEWPORT -- Before Beverly Taylor got the notice on her door telling her that her rent subsidy was in jeopardy, she didn't know much about the federal government shutdown.

She doesn't have a TV and rarely gets the newspaper because she doesn't have a car to go pick it up. She moved to the Kenmont Apartments in Newport in 2017 to be closer to her grandson so he could help take care of her. She's 73 and can barely hear.

Tenants in the 42-household Kenmont Apartments participate in a U.S. Department of Agriculture Rural Development program. It's similar to the more commonly known Section 8 voucher program through the Department of Housing and Urban Development, which assists low-income people in paying their rents.

"Due to the government shutdown, all government agencies are on furlough until further notice," the letter read. "This means no rental assistance payments will be processed until the return to office. As of February 1, 2019, all tenants will be responsible for full back rent."

The letter, which Taylor said she got Tuesday, goes on to say that the due date for rent has been pushed to Feb. 20 and that tenants will continue to be responsible for the full rental payment until the government reopens.

U.S. Sen. John Boozman, R-Ark., said in an emailed statement via a spokesman that he'd been in contact with representatives from HUD and the USDA who told him that rent payments for January and February won't be affected by the shutdown.

"I am hopeful that President Trump's proposal to reopen the government will bring congressional leaders to the table to negotiate so Arkansans who qualify for and rely on government housing assistance won't be faced with an interruption in aid," the statement read. "I will continue working with the White House and my colleagues from both sides of the aisle to find a solution to end this uncertainty."

Thousands of Arkansans receive rental assistance from the USDA program or from HUD. Neither agency is operating fully during the shutdown, and many payments could be delayed.

Tenants who get assistance from the USDA program in Alma received similar notices last week, but the landlord sent another memo telling them that the funding was safe until the end of February after the situation drew media attention, calls to the USDA and calls to legislators.

"The Congressman understands from a similar situation in his district involving a rental assistance program via USDA that they are fully funded for several more months, but is more than happy to have his staff, along with the property owner, get in touch with the dedicated team at USDA to confirm so no one is evicted from their home in the middle of the winter," the statement read.

Last week, the Metropolitan Housing Alliance in Little Rock began making plans to send letters to its Section 8 tenants and landlords to let them know that the agency wouldn't be able to pay its portion of rent past the end of February. Contracts with landlords should prevent them from evicting tenants because the agency didn't pay the rent, officials said.

Cindy Mahan, the chief executive officer for Friendship Community Care, said the nonprofit is getting ready to dip into its reserves to keep a Russellville Project-Based Section 8 complex open past its contract, which ends Jan. 31. The complex has 18 households of senior citizens.

Project-Based Section 8 gives vouchers for rent within certain buildings rather than traditional Section 8, which goes to an individual who then looks for a place to rent.

Project-Based Section 8 contracts expire on 12 complexes in Arkansas at the end of January, according to federal data.

The partial shutdown began in December and has lasted 30 days. It's the longest in U.S. history. It began because President Donald Trump wanted funding for a border wall between the United States and Mexico, but Democratic leaders say they want to increase border security in other ways. That led to the current standoff over government funding.

A spokesman from the office of U.S. Sen. Tom Cotton, R-Ark., did not return requests for comment by press time Saturday, but in a previous statement on Jan. 11, when protesters visited his Little Rock office, Cotton's spokesman issued a prepared statement saying that the senator hoped to find a solution to the shutdown's effects by working with the president.

City Council members in Newport didn't know about the letters at the apartments until they got calls from an Arkansas Democrat-Gazette reporter. Mayor David Stewart also wasn't aware of them, but said the council would discuss possible ways to help at Tuesday's meeting.

"We'll definitely look into what we can do, but I don't know what we can do right now," Stewart said. "Even if the owners tried to evict them, there's a pretty good period of time before they would actually have to move out because an eviction takes some time."

Taylor said she'll be able to pay her rent, which will be $430 per month, from her Social Security check, but won't have money for much else. She worked in factories and for phone companies in the South for most of her life before settling in Arkansas.

"I can't afford to buy groceries or nothing else," she said. "I'll just starve to death I guess."

Neighbor Billie Tubbs, 49, said she's worried about Taylor and others in the complex losing their housing. She said they're close and "watch each others' backs."

Tubbs said she started a new job last week, so her rent was already scheduled to go up from just over $100 to $324. But if the government stays closed, she's expected to pay $475 for her two-bedroom unit.

"I thought the world would end before this happened," she said of the shutdown. "You've just got to have faith."

Her daughter's 13th birthday is Feb. 2, the day after she'll need to pay full rent. They're planning a trip to Cracker Barrel and to see a movie. She said they'll be able to pay rent, but money will be tight for a while.

Janet Honey, 71, said she found out Tuesday that her rent would go from $178 per month to $475, and she spent the rest of the day in bed, crying and trying to think of ways to make up the difference in case the shutdown lasts for much longer.

She's lived at Kenmont Apartments for 14 years and relies on her Social Security check for income. She worked most of her life in factories, as a secretary and picking cotton.

She said she'll be able to pay the rent, at least at first, but "I will really have to count my pennies."

Print Headline: Tenants at Arkansas complex fret after notified rent aid held up; until shutdown ends, full payment up to them, tenants told