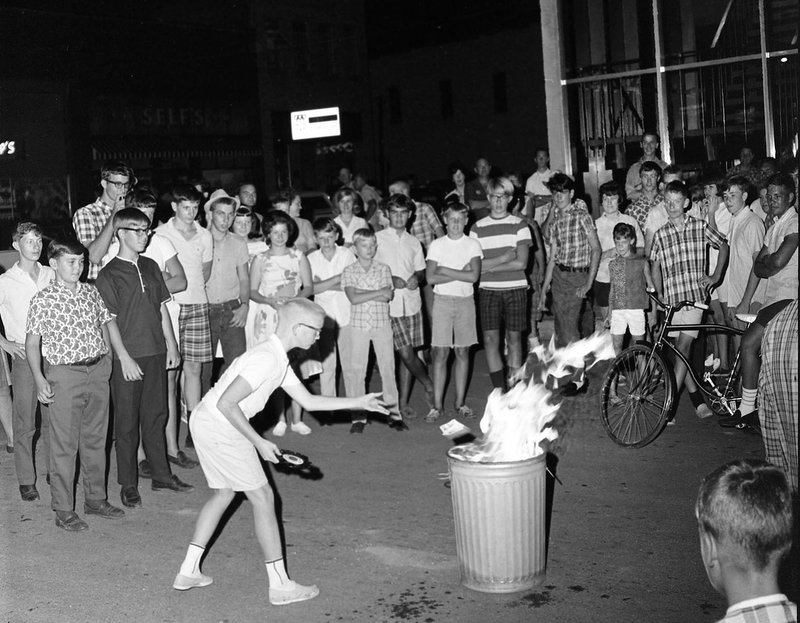 Courtesy Shiloh Museum of Ozark History / Springdale News Collection / Charles Bickford, photographer David McKinney throws Beatles records into the fire in Springdale on Aug. 15, 1966. "We produce two photo exhibits a year, so I'm always on the lookout for possible topics with broad appeal," says Shiloh Museum photo archivist Marie Demeroukas. To get viewers "in the proper mindset" for the "Stand Up, Speak Out" exhibit on protests, the museum will offer a "selfie station." "Visitors can 'stand up and speak out' about an issue important to them by writing a message on a dry-erase board and holding it up in front of a colorful backdrop," she says.

"Several years ago, I ran across some interesting negatives from 1966," says Marie Demeroukas, photo archivist and research librarian at the Shiloh Museum of Ozark History in Springdale. "They showed a group of teens throwing Beatles records into a fire. At that time, when John Lennon famously said that the Beatles were 'more popular than Jesus,' many Southern radio stations in the U.S. reacted. Some stopped playing the band's records while others, like local station KBRS in Springdale, organized 'record burning sessions.'

"I thought protests would offer a different lens through which to look at our area's history."

‘Stand Up, Speak Out’

WHERE — Shiloh Museum of Ozark History in Springdale

The result is "Stand Up, Speak Out," a new exhibition of photographs from the museum's massive collection. Open through May 18, it includes "historic photos of public demonstrations over such issues as labor, education, war, civil rights, government and the environment."

Demeroukas answered these questions about the exhibit and the museum's photo archives for What's Up!

Q. What did you learn while putting together the exhibit that surprised you?

A. For some exhibits I start with the story and then find images to support it. But with this exhibit I found the images first, choosing them because they were compelling and spoke to the wide variety of issues that folks were (and still are) passionate about -- war, nuclear energy, historic and environmental preservation, racism, labor strikes, abortion, education, immigration and such. I was pleasantly surprised to come across dozens of wonderful images made during a 1970 protest against the Vietnam War. During that event 750-plus folks started at the University of Arkansas and ended up in front of the Selective Service office on Center Street in Fayetteville. Along the way speeches were made, a black coffin was carried by the marchers, and President Nixon was burned in effigy. In the end, 57 people were arrested and marched to the city jail. Unfortunately, I was only able to choose one photo for our current exhibit, but with the protest's 50th anniversary coming up, I think it would be great to do a program about it, to show more of the images and perhaps hear from some of the folks involved.

Q. How did the photo collection get started, how big is it, how do you know your way around it?

A. Since our beginning in 1968 the museum has collected the photographic history of Northwest Arkansas. When [former] curator Mary Parsons joined the staff in 1977, she took an interest in the image collection. A photographic darkroom was set up, and staff began copying photos lent by individuals and area museums through its grant-funded and award-winning project, "Vanishing Northwest Arkansas." We've been going strong ever since. Today we have over one-half million images in the collection, from the 1850s to present day. For "Stand Up, Speak Out!" we relied on the fabulous archives from The Springdale News and The Northwest Arkansas Times, mid-1960s to mid-1990s. Through the efforts of former museum director Bob Besom and preservation-minded newspaper folks like Maudine Sanders, Jim Morriss, Andy Shupe, and others, these materials were donated to the museum in the mid-1990s, just as the two papers were switching over to digital cameras. We are so proud and fortunate to have the newspaper collections.

Q. What kinds of things are you looking at for photo exhibits for 2019?

A. On May 21 we'll open the exhibit "Scenes of Madison County," No. 4 in a series about the history, people, places and unique facets of our core counties. On Dec. 17 we'll feature "Working on the Railroad," a look at the railroading history of Northwest Arkansas and the huge role railroads played in the area's growth and economy.