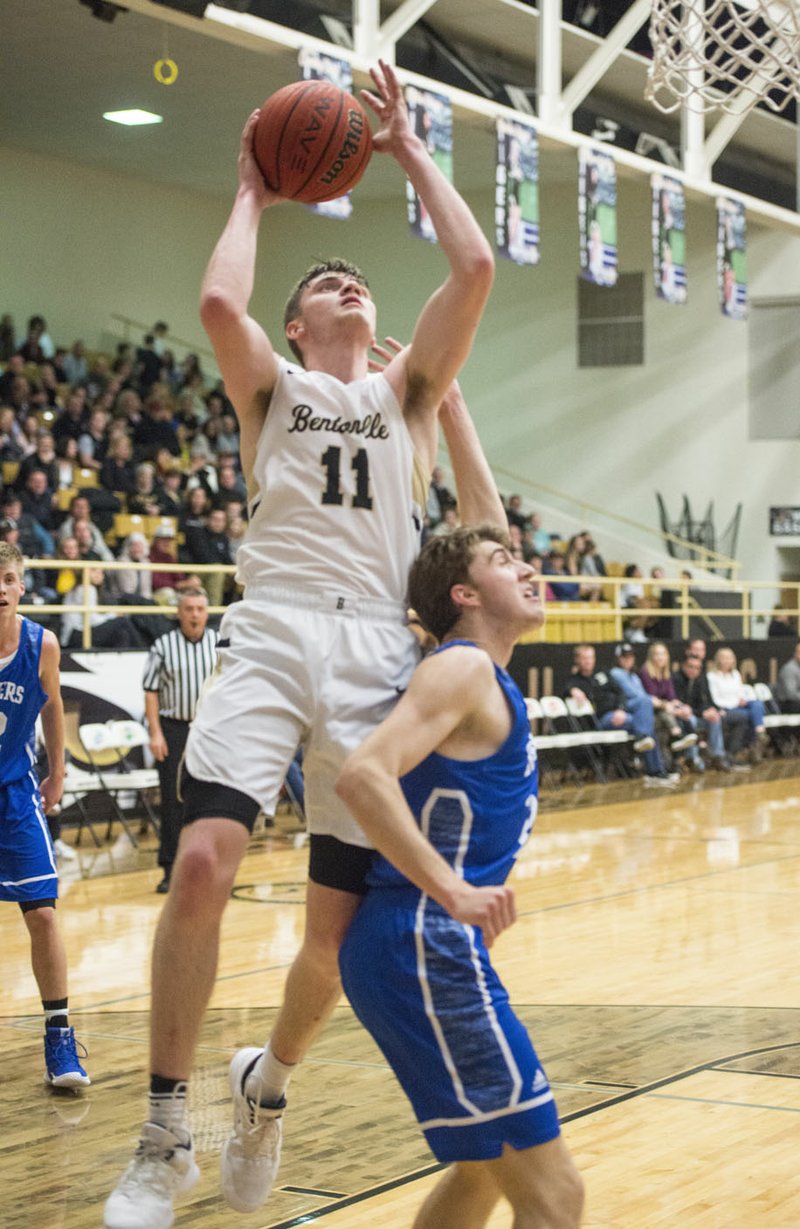 BENTONVILLE -- Michael Shanks carried most of the offensive load in the first half, but Bentonville High's boys put Rogers High away when others took over the scoring Friday night.

Colton Simmons scored eight of his 13 points in the second half, and Brayden Freeman had nine of his 11 as the Tigers claimed a 53-29 victory over the Mounties during 6A-West Conference play in Tiger Arena.

"I thought Michael was as good as he has played since I've been here," Bentonville coach Dick Rippee said. "He rebounded, he made the extra pass and he was good defensively. He relaxed and played like a senior leader should play on a team that was desperately trying to rebound.

"I thought everybody else followed his lead, and that's what they are supposed to do. Brayden Freeman was solid as always, Connor Deffebaugh got us into our stuff and his defense was fantastic. Colton Simmons and Josh Smith got it going at different times to help us."

A Smith 3-pointer sparked an 11-0 run early in the second quarter and allowed Bentonville to stretch its lead into a 21-8 cushion following a Deffebaugh free throw midway through the second quarter. Rogers (13-4, 3-2), however, did manage to pull into single digits three times, with the final time being 26-17 on Derek Hobbs' 3-pointer in the final minute.

The Mounties, however, struggled with their shooting throughout the second half and never gave themselves a chance to recover once Bentonville went an 18-6 run through the third quarter and stretched its lead to a 44-23 margin. The Tigers defense held Rogers to just five field goals over the final 16 minutes, and the Mounties didn't attempt a free throw in the entire game.

"We just didn't make shots, and that happens sometimes," Rogers coach Lamont Frazier said. "When you run the style of offense we run, if you don't shoot the ball well you struggle. Our struggles carried over to the defensive end, as well.

"Not getting any free throws was disheartening because we're used to at least making attempts to get to the free-throw line. We just didn't do a very good job."

Hobbs finished with 11 points and was the only Rogers player in double figures.

The War Eagles scored the final nine points of the game and held Bentonville West scoreless over the final 2:45 to earn the 6A-West Conference win Friday night at War Eagle Arena.

Heritage senior Keith Saucier came up with a huge steal and layup to snap a 35-35 tie and give his team the lead for good with under a minute left. The War Eagles (7-10, 2-3) made 7 of 10 free throws in the final two minutes

"I think we got tough defensive and a lot of it was because of our humongous student section that was loud and crazy," Olsen said. "We made a couple plays late and got some rebounds and got the foul line. Keith Saucier out top makes an unbelievable play, tipping the ball away and giving us the lead for good."

Dillon Bailey led all scorers with 16 points for West, which led 20-18 at halftime but trailed 28-27 after three quarters. Ethan Carpenter led a balance Heritage scoring attack with eight and Tyler Furuseth added six.

Har-Ber (7-8, 3-2 6A-West) rode the hot shooting of Nick Buchanan and Lawson Jenkins to a 24-point lead in the second quarter. Buchanan and Jenkins combined for six of Har-Ber's eight 3-pointers in the first half and Cole Bishop buried two more including one at the end of the first quarter.

"We played really well," Har-Ber coach Scott Bowlin said. "I think we're beginning to hit our stride a little bit. I thought we shared the ball and and when we share the ball like that, because we have guys who can shoot it, I think we can play with anybody up here. If we play like that and play good defense."

Jenkins led the Wildcats with 26 points and Buchanan scored 21. Har-Ber knocked down 13 3-pointers in the game as a team.

Brayden Gilmore helped Van Buren (4-14, 0-5) climb back in the game in slicing drives to the left side of the lane, finishing with 21 points. The Pointers got as close as 10 points, 56-46, in the third, but the Wildcats regained the momentum at the free-throw line to pull away in the final quarter.

Collin Cooper scored 21 points and opened the fourth quarter with a four-point play to lead Fayetteville past Springdale.

Springdale used a 7-0 spurt to tie the game 34-34 after three quarters. But Cooper put Fayetteville ahead again with a falling down 3 and he made his free throw after being fouled.

Fayetteville also used some big defensive stops, including a charge taken by Sullivan Witte that helped change the momentum back to Fayetteville (14-3, 5-0).

"For me, one of the biggest plays was the charge taken by Sully that wiped out a basket," Fayetteville coach Kyle Adams said. "We got a basket out of that then Coop hits the big four-point play for us."

Springdale jumped to an early lead before Fayetteville took over by outscoring Springdale 13-4 in the second quarter. Connor Barnett tied the game with a 3-pointer and Cooper put Fayetteville ahead 22-19 seconds later. Both players had eight points at the half.