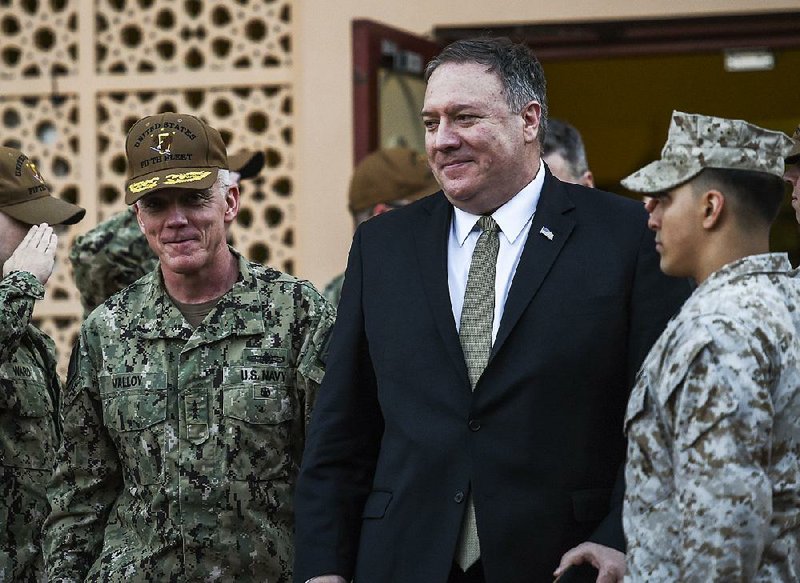 Pompeo arrived in Bahrain to continue a nine-nation tour of the Middle East aimed at reassuring America's partners that withdrawing troops from Syria does not mean Washington is abandoning the region.

Pompeo was also traveling to the United Arab Emirates, where he will call for increasing pressure on Iran and push for unity among Gulf neighbors still embroiled in a dispute with Qatar. He'll be promoting a U.S.-backed initiative to form what some have termed an "Arab NATO" that would bring the region together in a military alliance to counter threats from Iran.

In Bahrain, the UAE and later Qatar, Saudi Arabia, Oman and Kuwait, Pompeo will be making the case as he did on previous stops in Jordan, Iraq and Egypt that Trump's decision to pull U.S. troops from Syria is not a sign Washington is retreating from the fight against the Islamic State militant group. The trip came as a U.S. military official announced Friday that the withdrawal had begun, though he declined to comment on specific timetables or movements.

U.S. partnerships with the members of the Gulf Cooperation Council "are critical to achieving shared regional objectives: defeating [the Islamic State], countering radical Islamic terrorism, protecting global energy supplies, and rolling back Iranian aggression," the State Department said in a statement released as Pompeo departed Egypt for Bahrain, which is home to the U.S. Navy's 5th Fleet.

But the now 2-year-old crisis among Gulf Cooperation Council members Saudi Arabia and UAE and Qatar has hampered U.S. attempts to forge a unified front against Iran. Washington's efforts to ease the dispute, begun by then-Secretary of State Rex Tillerson, have thus far failed and took another hit this week when the former general tasked to broker a solution stepped down.

"A united [council] is the backbone for regional peace, prosperity, security, and stability, and is essential to countering the single greatest threat to regional stability: the Iranian regime," the State Department said.

At each of his stops in the Gulf, Pompeo will be urging progress on creating the Middle East Strategic Alliance, which would join Gulf Cooperation Council militaries with those of Egypt and Jordan to serve as a counterbalance to Iran, which they all accuse of fomenting unrest and rebellion throughout the region.

Pompeo told Fox News before departing from Cairo that there would be an international conference on Iran and the Middle East in Poland on Feb. 13-14.

Pompeo during his trip will also call for boosting efforts to end the conflict in Yemen, where a Saudi-led coalition has been battling Iranian-backed rebels in what the U.N. says is now the world's worst humanitarian crisis, the department said.

U.N.-led peace efforts in Yemen, along with attempts to broker a political solution to the war in Syria that "expels every last Iranian boot from the country" and to promote reconciliation in Afghanistan, will also be high on Pompeo's agenda, the State Department said.

Pompeo kicked off the Gulf portion of his tour after a stop in Cairo, where he delivered a rebuke of former President Barack Obama's Middle East policies that Obama had outlined in a 2009 address to the Arab and broader Muslim world.

In a speech titled "A Force for Good: America's Reinvigorated Role in the Middle East," Pompeo accused the former president of "misguided" thinking that diminished America's role in the region while harming its longtime friends and emboldening Iran.

He said the Obama administration had been naive and timid when confronted with challenges posed by the revolts that convulsed the Middle East, including Egypt, beginning in 2011. And, he said the Trump administration was taking action to repair the damage.

"The age of self-inflicted American shame is over, and so are the policies that produced so much needless suffering," Pompeo said in the speech, which was denounced by former Obama administration officials who said it pandered to autocrats and ignored human-rights concerns.

Since withdrawing from the 2015 nuclear deal last year, the Trump administration has steadily ratcheted up pressure on Tehran and routinely accuses the nation of being the most destabilizing influence in the region. It has vowed to increase the pressure until Iran halts what U.S. officials describe as its "malign activities" throughout the Mideast and elsewhere, including support for rebels in Yemen, anti-Israel groups, and Syrian President Bashar Assad.