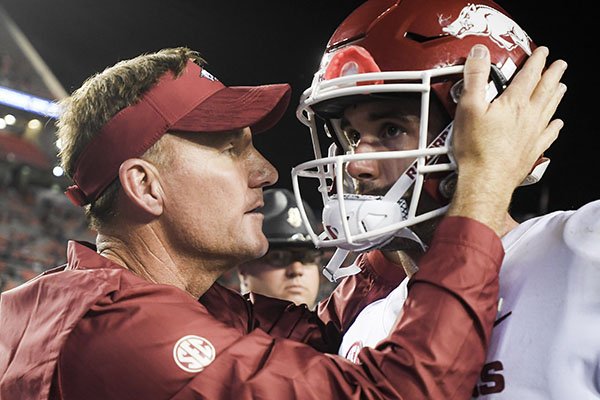 Arkansas coach Chad Morris (left) talks with quarterback Ty Storey following a game against Auburn on Saturday, Sept. 22, 2018, in Auburn, Ala. The Razorbacks lost to the Tigers, 34-3. - Photo by Charlie Kaijo

FAYETTEVILLE -- University of Arkansas Coach Chad Morris made his first public comments about senior quarterback Ty Storey's decision to put his name in the NCAA transfer portal on Friday, indicating it's likely Storey will depart.

"Ty came in and we had a long talk and visit," Morris said during an appearance on Fayetteville's KQSM-FM, 92.1. "He expressed to me that he wants to go somewhere and play, and I understand those things.

"That's great. You're in that role of a quarterback, and that's a unique position. I've been around it my entire life."

Morris has said in recent public appearances that the Razorbacks, who lost out to Missouri on graduate transfer Kelly Bryant, are shopping for a transfer quarterback to supplement the roster.

"We have a plan," he said on the radio show. "We're out on the road recruiting, and there's options that we have.

The senior from Charleston started nine games last season -- all losses for the 2-10 Razorbacks -- and completed 143 of 250 passes for 1,584 yards with 11 touchdowns and 10 interceptions. Storey played a starring role in Arkansas' 55-20 victory over Eastern Illinois in the season opener with 12-of-17 passing for 261 yards and 3 touchdowns.

The Razorbacks already have lost junior Cole Kelley, who transferred to home-state Southeastern Louisiana earlier this winter. Kelley went 1-1 in two starts. Noland made one start against Tulsa when Storey sat out with a concussion and guided a 23-0 shutout of the Golden Hurricane.

Noland and Jones both retained their redshirts by playing in four or fewer games in 2018.