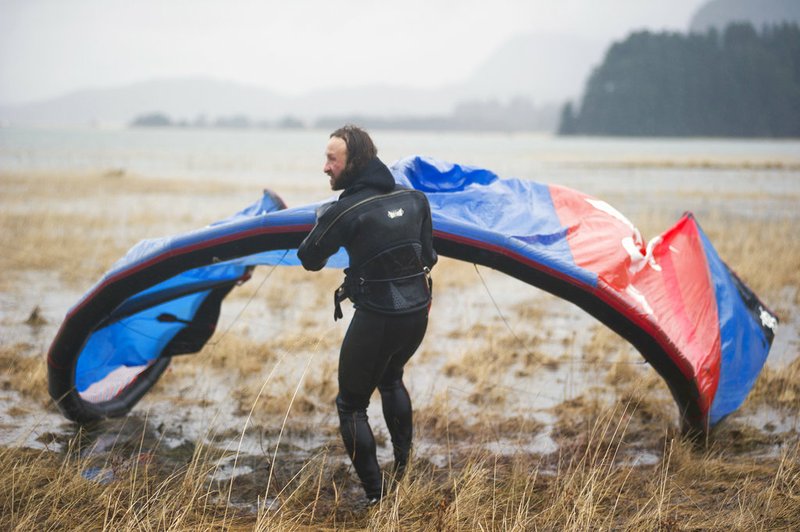 In this Sunday, Dec. 9, 2018, photo, Rob Cadmus drags his kite back to shore after kiteboarding in the Gastineau Channel in Juneau, Alaska. Kiteboarding is making waves with Southeast Alaskans. (Nolin Ainsworth/Juneau Empire via AP)

JUNEAU, Alaska -- The two objects were unmistakable from the Egan Drive traffic.

Large kites, similar in appearance to the ones used by paragliders in the summer, sailed gently above Mendenhall Wetlands State Game Refuge on a rainy December afternoon. Below the flying instruments were two black dots, kiteboarders, grasping a small bar to steer themselves across the watery landscape. As the kites cruised across the top of the channel, so too did the drysuit-clad bodies some 60 feet below.

"Did you see my air?!" Rob Cadmus said to his kiteboarding companion after unclipping from his kite.

As winter seems to be arriving later and later with each passing year, Cadmus and others turn to kiteboarding as a way to get turns in before Eaglecrest Ski Area opens.

"There's a small group of guys in town who do it," Cadmus said. "It's kind of like when the skiing's not good and it's windy, we go kiteboarding."

Thatcher Brouwer was still learning the ropes, literally, from his friend by steering the kite. For that he didn't bother strapping on a short, twin-tipped board; instead, he sat in the water while fiddling with the kite, getting a sense for how it reacts to the wind.

"I did a little practice dragging myself through the water, just down on the water and having the kite pull you through the water," Brouwer said. "It's pretty easy to go straight downwind, it's not too easy to (go) side-to-side, or upwind."

James Alborough, 52, is one of the foremost authorities on water and snow kiteboarding in Southeast Alaska. Alborough, who lives in Haines and created his own kiteboarding website, recommends beginners accompany a more experienced rider when starting out. Kiteboarding videos on YouTube are helpful, but not as much as a real-life instructor.

"You're going to get thrashed if you do it yourself, literally," Alborough said in a phone interview. "There's so many nuances to it when you're first starting off that you need to have an experienced person. If you rig the kite wrong, it's going to act erratically, and it's going to hurt you. All of us who are self-taught have been thrashed."

One of the common misconceptions about kiteboarding, according to Alborough, is that it requires a lot of upper body strength. But it doesn't.

"You're attached to the kite with a harness, so you're upper body is mainly for steering, you're not actually holding the kite," he said.

Alborough took up his wife's suggestion to try out kiteboarding over 10 years ago and is now one of the roughly 100 people who do it across the state.

Even though he grew up surfing in California, he was reluctant to try it out, but ended up being glad he did. He found the sensation of kiteboarding was very similar to surfing, "but you don't have to wait for waves, or jostle with any crowds." In Haines, where it snows often, he can kiteboard practically all year, either in the Chilkat Inlet, or any place with snow and winds between 10-30 mph.

"As a beginner, I think snow is easier because you don't have to worry about staying afloat," Alborough said.

"But I prefer the water myself because it's more dynamic and it's softer and less fickle. All you need is wind, you don't have to worry about wind and snow."