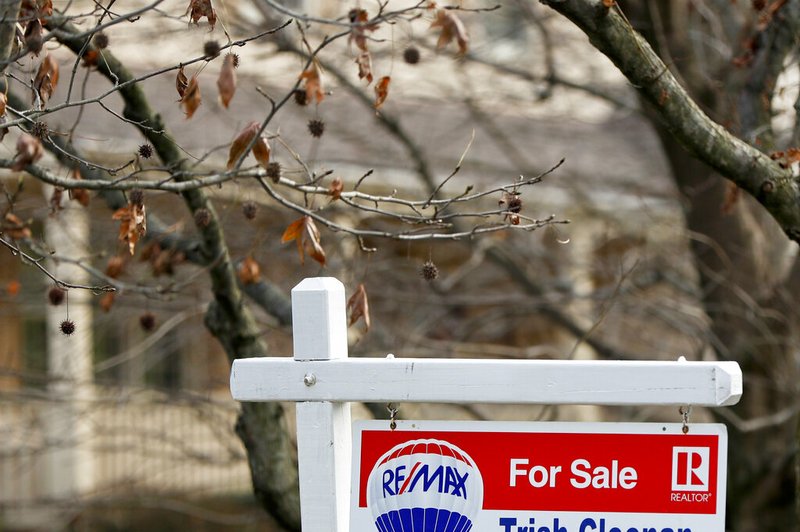 In this Jan. 3, 2019, file photo a realtor sign marks a home for sale in Franklin Park, Pa. The partial federal government shutdown is complicating the already complicated process of getting and managing a mortgage. For one thing, the political storm is like severe weather at a major airport: You can expect minor delays or worse. Also, it could mean financial hardship for some federal government employees facing mortgage payments without their regular paychecks. (AP Photo/Keith Srakocic)

The partial federal government shutdown is complicating the already complicated process of getting and managing a mortgage. For one thing, the political storm is like severe weather at a major airport: You can expect minor delays or worse. Also, it could mean financial hardship for some federal government employees facing mortgage payments without their regular paychecks.

Here's how the shutdown is affecting homebuyers and homeowners -- and what you can do about it.

IF YOU'RE GETTING AN FHA, VA OR USDA LOAN

If you're getting a Federal Housing Administration or Department of Veterans Affairs loan, it's likely you can expect delays in the underwriting process, and it's possible your closing date will be pushed back as well.

There's good news for most FHA-qualified homebuyers: Single-family FHA loans are being funded, even during the shutdown. FHA home equity conversion mortgages (known as reverse mortgages) and FHA Title I loans (financing for permanent property improvements and renovations) are the exception -- and won't be processed during the shutdown. The processing of VA loans will continue, according to the Mortgage Bankers Association, but you may have to wait.

Support staff at the VA and at the Department of Housing and Urban Development who handle underwriting or entitlement questions "are unavailable, so FHA/VA borrowers may experience delays," says Ted Rood, a senior loan officer in St. Louis.

Because of the shutdown, VA and FHA spokespeople weren't available to provide an estimate of how many borrowers could have their loans delayed. But the most-recent data suggest delays could potentially affect thousands of borrowers.

The U.S. Department of Agriculture isn't approving new USDA loans during the shutdown. According to USDA data, the department guaranteed or made about 10,000 single-family loans each month in the most recent fiscal year that ended in September.

IF YOU'RE SEEKING A CONVENTIONAL LOAN

Most mortgages are considered conventional loans, meaning they aren't backed by the federal government. However, they are facilitated by government-sponsored enterprises, such as Fannie Mae and Freddie Mac.

As private companies, Fannie and Freddie aren't directly affected by the shutdown. Mortgage processing is continuing as usual, except in cases where the federal government provides information required for underwriting.

"The IRS has not been processing 4506-T tax transcripts -- tax return verifications -- which are required on most files, although that service is restarting," Rood says. "There will still be a backlog due to requests that have been piling up since Dec. 22."

Self-employed borrowers are particularly affected by the lack of access to federal income tax transcripts. Some lenders may accept signed tax returns in lieu of transcripts.

And the shutdown could also stall verification of employment for government employees.

IF YOU NEED FLOOD INSURANCE

Getting flood insurance if you're buying in a flood-prone area shouldn't be a problem despite some earlier troubled waters.

The Federal Emergency Management Agency announced on Dec. 28 that it would resume selling and renewing flood insurance policies. That reversed a Dec. 26 decision to suspend policy sales and renewals during the partial shutdown.

"This new decision means thousands of home sale transactions in communities across the country can go forward without interruption," National Association of Realtors President John Smaby said in a press release.

IF YOU OWN A HOME BUT AREN'T GETTING PAID

If the lack of a paycheck has you worried about paying an existing mortgage on time, contact your loan servicer immediately. Explain your situation and ask about alternatives.

One common option is forbearance, an arrangement designed to help homeowners during periods of financial hardship. Forbearance temporarily reduces or suspends your mortgage payments while money is short. For example, Wells Fargo and LoanDepot list forbearance on their websites, though cases are approved on an individual basis.

A short-term loan that makes up for missed pay is another possible option. Navy Federal Credit Union, for example, is offering one-time zero percent APR loans of up to $6,000 for federal employees and active-duty members of the Coast Guard who typically use direct deposit for their paychecks.

Talking with your lender before you miss a payment could keep your credit score from suffering a hit.

"We will work with each customer individually and can help with things such as late fees and not reporting to the credit bureau," Tom Kelly, a JPMorgan Chase spokesman, said in an email.

IF YOU'RE CONSIDERING A MORTGAGE RATE LOCK

Mortgage rates already had been falling when the shutdown began Dec. 22, and they fell more than an eighth of a percentage point in the two weeks that followed. That's why the shutdown could give you a chance to grab a good mortgage rate.

"Our expectation is that this will be a short-term blip and you'll be glad if you were able to take advantage of the drop in mortgage rates," says Danielle Hale, chief economist for Realtor.com. Her forecast assumes that the shutdown won't last for months and that mortgage rates will rise this year.

'LENDERS ARE CLOSING THOUSANDS OF LOANS A DAY'

Shutdown-related issues are causing delays of up to two weeks on typical loans, according to Alan Rosenbaum, CEO and founder of Guardhill Financial in New York City. Still, one industry leader thinks it's mostly business as usual.

"The government shutdown is having a minimal impact on the mortgage industry," Mat Ishbia, president and CEO of United Wholesale Mortgage, says. "Lenders are closing thousands of loans a day. Everything is moving forward."

As well, a Jan. 7 survey of 2,211 members by the National Association of Realtors found that 75 percent of respondents said the shutdown hasn't had an impact on contract signings or closings.

Of those Realtors who said the shutdown had affected transactions, a quarter said a buyer decided not to buy because of general economic uncertainty; 17 percent had clients whose closings were delayed because they were getting USDA loans; 13 percent said a client's closing was delayed because of IRS income verification issues; 9 percent reported delays with FHA loans; and 6 percent with VA loans.

And 9 percent said they had a client who was a federal employee who decided not to buy because of lost income or furlough.

NerdWallet: What to know about FHA loans

NerdWallet: All about VA loans

NerdWallet: What is a USDA loan?

Print Headline: What the government shutdown means for your mortgage