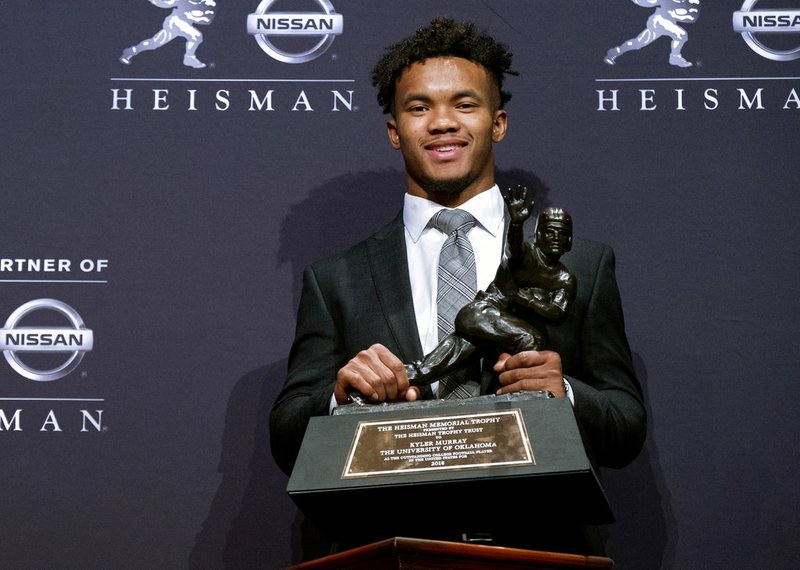 In this Dec. 8, 2018, file photo, Oklahoma quarterback Kyler Murray holds the Heisman Trophy after winning the award in New York.

Here is a pertinent question regarding both the future of two-sport phenom Kyler Murray of Oklahoma and the shifting shape of the quarterback position in the NFL: If Russell Wilson -- a third-round pick of the Seattle Seahawks who was selected sooner than predicted -- was the exact prospect now as he was in his draft year of 2012, how would the league view him?

Wednesday night, the San Francisco Chronicle reported the Oakland A's expect Murray to enter the NFL draft. Murray, the Heisman Trophy winner, would be walking away from a $4.6 million signing bonus, earned when the A's selected him ninth overall in last year's MLB draft, and a spot in big league spring training. Murray could still choose baseball over football, but the A's reported outlook is a major signifier.

McShay projects Murray as a first-round NFL pick. He was early with that prediction, and more and more NFL types are leaning toward his view. Even though Murray passed for 4,361 yards in Coach Lincoln Riley's venerated system this season and ran for another 1,001 with staggering speed, producing 54 total touchdowns, that projection is a fascinating indication of what the NFL values in quarterback play, and what historical fixations it no longer cares much about.

Murray stands 5 feet 9 inches, played in an extreme spread, Air Raid passing offense and started for only one season. Not long ago, those traits would have doomed Murray as an NFL prospect. Maybe not five years ago, but certainly within the last decade, NFL evaluators would have pegged Murray as a slot receiver or return specialist, McShay said.

But the ground has shifted. The NFL took forever to adapt to how college teams play offense, but the adjustment has happened seemingly all at once. Pro coaches have learned to do what college coaches have done over the last decade: take premier athletes, accentuate their strengths, simplify offensive schemes, play fast. Quarterbacks who stand in the shotgun and have the agility to move within and outside the pocket can create their own passing lanes, regardless of height. Running quarterbacks are more protected now because of new rules legislating contact.

The NFL coaches don't have much choice. The quarterbacks coming into the league know one way to play, and there is less practice time to indoctrinate them in an entirely new system.

For years, football was played one way, with a few differences from level to level, from Pee Wee through college -- spread it out, throw it around, rarely huddle, use spare terminology. The rise of 7-on-7 leagues further ingrained those strategies and habits. The NFL resisted, choosing instead to try to fit the talents of quarterbacks into their systems. They have finally realized the folly of that approach. Football is now played the same way, with a few differences at every level, all the way up to the NFL.

Patrick Mahomes, who played in the Air Raid at Texas Tech, may win the MVP in his second season. Baker Mayfield, only a couple inches taller than Murray and a product of both Texas Tech and Oklahoma, was drafted first overall last season and flashed the promise of a franchise quarterback. Wilson is annually one of the league's best QBs, even though he's shorter than Mayfield.

That's a bit of an oversimplification, of course. Mahomes took a year to learn Andy Reid's system. Mayfield's great rookie season included periods of adjustment in reading NFL defenses, which are faster and more complex than college units. But the style they dominated with in college translated.

Murray may be about to prove that the NFL is no longer shunning short quarterbacks who played in extreme spread systems and like to run. It's looking for them.