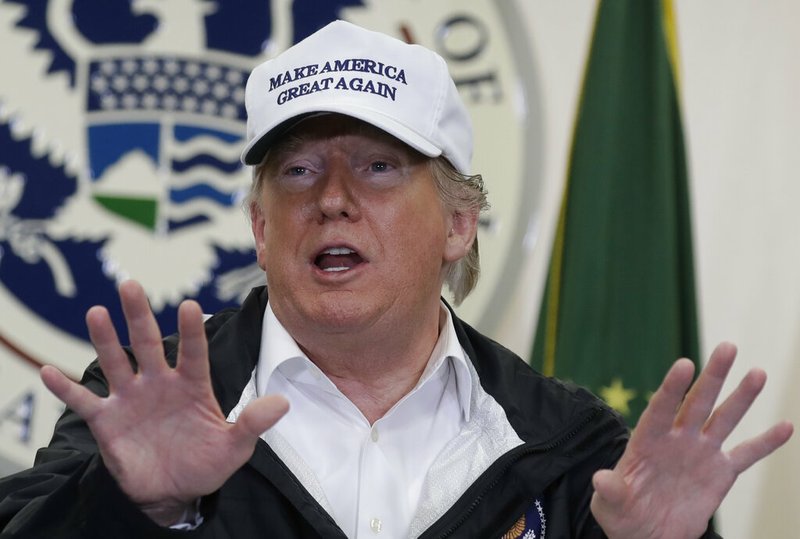 WASHINGTON — Republican lawmakers expressed optimism Friday that the Trump administration would spare billions of dollars in unspent disaster relief funds earmarked for areas including hurricane-pounded Puerto Rico as they search for money to build the president's promised border wall.

Backlash Friday was swift to news that the White House had directed the Army Corps of Engineers to comb through its budget, including $13.9 billion in emergency funds that Congress earmarked last year, to search for potential funding as President Donald Trump continues to weigh signing a national emergency declaration to build the wall without Congressional signoff. The details were spelled out by a congressional aide and administration official familiar with the matter who spoke on condition of anonymity because they were not authorized to speak publicly.

Rep. Dan Crenshaw, R-Fla., tweeted that acting White House Chief of Staff Mick Mulvaney had "assured Texans that he understood the deep concerns about using Harvey relief funds for the border" during a meeting with newly sworn-in Republicans Friday.

Crenshaw told The Associated Press the White House was "still looking at the legal options," but was "very sympathetic" to concerns raised by him and other members of the group.

Republican Rep. Kevin Brady of Texas also told reporters Friday after his talks with the White House: "I feel confident disaster relief dollars will not be tapped."

The Army Corps request was the latest sign that the administration is laying the groundwork for a possible emergency order as negotiations between Trump and congressional Democrats to reopen the partially shuttered government have ground to a halt. Trump is demanding billions for his wall that Democrats won't give him. In the meantime, hundreds of thousands of federal workers are missing paychecks Friday.

Trump on Thursday gave his strongest public indication yet that he is leaning toward an emergency declaration as he traveled to the Texas border to continue to press his case for the wall.

But his tone was more measured Friday as he told reporters he was holding out hope Congress would make a deal.

"Now the easy solution is for me to call a national emergency. I could do that very quickly," he said. "But, I'm not going to do it so fast because this is something Congress should do and we're waiting for the Democrats to vote."

The wall was the central promise of Trump's presidential campaign, and supporters of the declaration strategy have been arguing to the president that an emergency declaration is his best option available to end the shutdown, giving him political cover to re-open the government without appearing to cave on the wall. Trump, they argue, then would be able to tell his supporters that he did all he could to fight for the wall, even if his order is stalled or blocked by the courts.

Nearly $14 billion in emergency disaster relief funds have been allocated but not yet obligated through contracts for a variety of projects in states including California, Florida and Texas and in the U.S. territory of Puerto Rico that have been ravaged by recent hurricanes, wildfires and other natural disasters, according to the aide familiar with the matter.

Defense Department officials have also been combing data on more than $10 billion in military construction projects to determine how much of that money might be available for use on the wall as well.

And the administration has also been looking at other pots of money, including asset forfeiture funds, two congressional Republicans told the AP Friday.

But Republican and Democratic lawmakers raised immediate concerns over shifting funds that have already been approved by Congress for projects in states across the nation.

Officials in Puerto Rico called the proposals "unacceptable" as the island struggles to recover from Hurricane Maria, the Category 4 storm that hit more than a year ago and caused more than $100 billion in damage.

Gov. Ricardo Rossello said the wall should not be funded "on the pain and suffering" of U.S. citizens who have faced tragedy after a natural disaster.

And Jenniffer Gonzalez-Colon, Puerto Rico's representative in Congress, said the idea amounts to "playing with our pain and hope."

"To use this now as a political football is not what U.S. citizens in Puerto Rico deserve," she said.

But even some Republican lawmakers uneasy about the idea of pulling money from Army Corps projects saw few alternate options. One said the phone calls coming into his office were overwhelmingly in favor of Trump's border wall.

Rep. Mark Meadows, R-N.C., a leader of the conservative House Freedom Caucus, has been in conversations with the White House on a trio of legislative alternatives. But he said those options seem less likely now without Democratic backing for some money for Trump's border plan.

Unless Republicans and Democrats compromise, he said, "I fully expect him to declare a national emergency."

Meadows, who speaks frequently with Trump, sees the emergency declaration as the "last tool" the president has.

"Most conservatives want it to be the last resort he would use," Meadows said. "But those same conservatives, I'm sure, if it's deployed, would embrace him as having done all he could do to negotiate with Democrats."