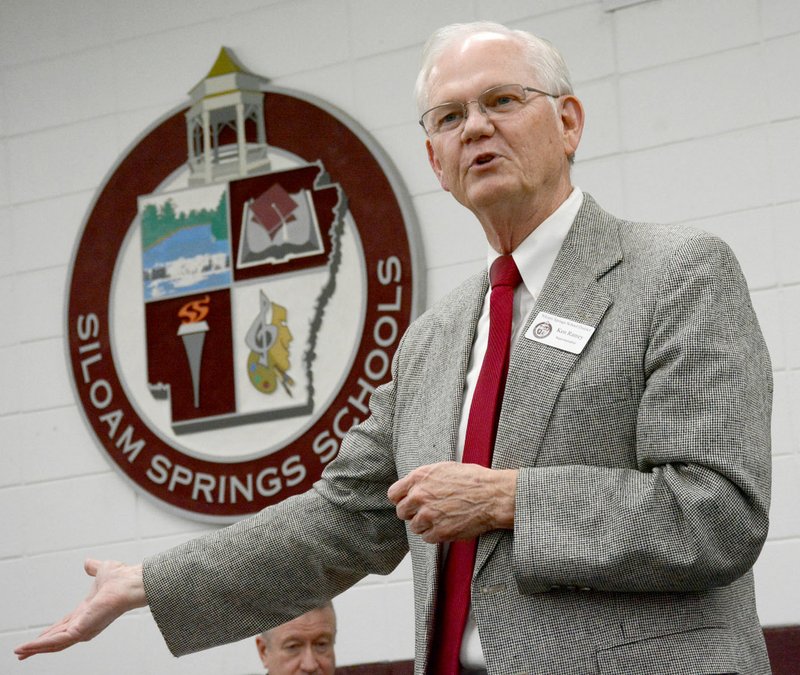 Siloam Springs Herald-Leader/JANELLE JESSEN Siloam Springs School District Superintendent Ken Ramey, seen here at a September school board meeting, announced Thursday that he will retire at the end of the school calendar year in June.

School board members grew emotional as they accepted his resignation letter during Thursday’s school board meeting. Ramey has served the Siloam Springs School District for 27 years, first as high school principal and assistant superintendent, then as superintendent starting in 2001. In 2017, he was named State Superintendent of the Year by the Arkansas Association of Education Administrators.

“It has been my honor to serve as superintendent for the past 17 years and to work for the school district since the 1992-1993 school year,” Ramey wrote in his resignation letter. “Siloam Springs is a strong, vibrant community with a caring ‘can-do spirit.’ The administrators, faculty and staff of the Siloam Springs School District are some of the best people that I know. I respect each of them highly and thank them sincerely for supporting the growth and development of all students.”

“I love education, I’ve been working since I was 9 years old, I don’t know how to not work, but I’m going to start figuring it out,” Ramey told school board members. “Siloam Springs has been a great place for me to work. It’s a great community, it has so much for me to offer families and kids, and I get to work with the best people in the world.”

School board president Brian Lamb, who has served on the board since 1998, said he took part in hiring Ramey as superintendent.

“I’m very proud of the accomplishment there,” he said. “He has brought trust, honesty, transparency, everything, love for kids. (For Ramey) it’s all about the kids, it’s all about public education and moving it forward, and it’s just been an honor and a pleasure to work with him.”