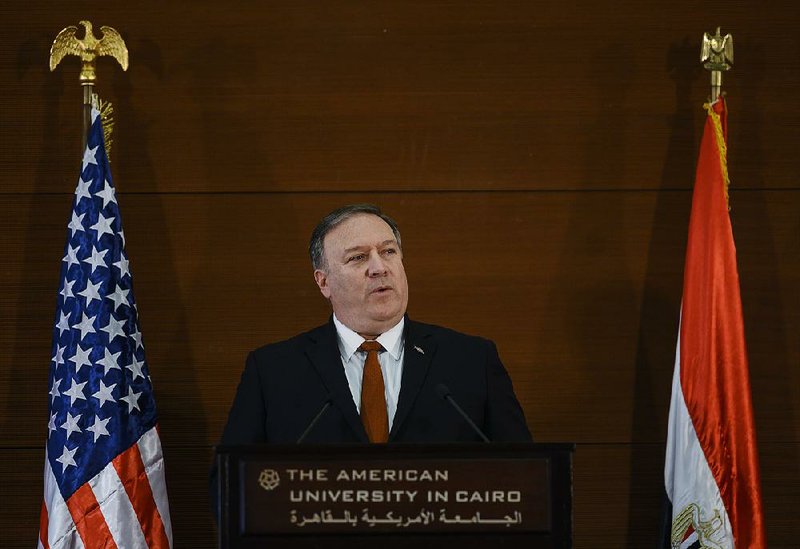 “The good news is this: The age of self-inflicted American shame is over, and so are the policies that produced so much needless suffering,” Secretary of State Mike Pompeo declared Thursday in his speech in Cairo. An aide to former President Barack Obama said the speech was “like listening to someone from a parallel universe” in which the Middle East’s shortcomings were ignored.

ABU DHABI, United Arab Emirates -- Secretary of State Mike Pompeo delivered a rebuke of President Barack Obama's Middle East policy in Cairo on Thursday in an address that centered on exerting maximum pressure on Iran and doubling down on U.S. alliances with Sunni autocrats and Israel.

In establishing another vision for the Middle East, Pompeo set up the Obama administration as a foil for what not to do, whether it was striking a landmark nuclear deal with Iran in 2015 or leaving Egypt's autocratic president, Hosni Mubarak, in the lurch during that country's protests in 2011.

"The United States has reasserted its traditional role as a force for good in this region," Pompeo told an audience at American University in Cairo. "We've learned from our mistakes."

The speech served as an explicit rebuttal of the address that Obama delivered in Cairo in 2009, extending an olive branch to Iran and calling for a two-state solution to the Israeli-Palestinian conflict. In that address, Obama criticized Israel's settlement activity and underscored the suppression of political rights by Arab monarchies.

Pompeo, by contrast, offered unconditional praise to Israel and credited countries such as Saudi Arabia and Bahrain for pushing back against Iranian aggression. He did not raise their human-rights records, in particular a Saudi-linked team's killing and dismemberment of journalist Jamal Khashoggi in October or the Bahrain government's suppression of its majority Shiite population.

Instead, he depicted those countries as victims of an Obama administration that was unwilling to stand proudly behind its allies. " [President Donald Trump's] administration has moved quickly to rebuild links among our old friends and nurture new partnerships," Pompeo said.

He also blamed the previous administration's approach to the Mideast for the ills that consume it now, particularly the rise of the Islamic State group in Iraq and Syria and Iran's increasing assertiveness, which he said was a direct result of sanctions relief, since rescinded by the Trump administration, granted to it under the 2015 nuclear deal.

"The nations of the Middle East will never enjoy security, achieve economic stability, or advance the dreams of its peoples if Iran's revolutionary regime persists on its current course," Pompeo said.

He said Obama ignored the growth of the Iranian-backed Hezbollah movement in Lebanon to the detriment of Israel's security and not doing enough to push back on Iran-supported rebels in Yemen.

While Obama's 2009 address cautioned that the United States did not have the answers to all of the Middle East's "complex" problems, Pompeo castigated that approach as insufficiently prideful.

"The good news is this: The age of self-inflicted American shame is over, and so are the policies that produced so much needless suffering," Pompeo said in a speech that ended with muted applause. "Now comes the real 'new beginning.' In just 24 months, actually less than two years, the United States under President Trump has reasserted its traditional role as a force for good in this region, because we've learned from our mistakes."

Pompeo spoke during confusion among U.S. allies over Trump's announced plan to withdraw U.S. troops from Syria immediately, a proclamation that was followed by remarks that the withdrawal will happen "slowly."

Pompeo said the United States would continue airstrikes in the region "as targets arise" and continue its mission of overseeing the full defeat of the Islamic State and the expulsion of Iranian forces from Syria, a job that analysts said would take much longer than an initial 120-day U.S. timeline for withdrawal.

U.S. officials say there is now no timeline for withdrawal.

Exerting pressure on Iran has been a cornerstone of the Trump administration's foreign policy. The president withdrew from the Iran nuclear deal in 2018, and reimposed punishing sanctions on the Islamic Republic despite opposition from key European allies. Pompeo has repeatedly called the country the "leading state sponsor of terrorism."

"Iran does sponsor terrorism, but not the variety that tends to threaten the U.S. homeland," said Max Abrahms, a terrorism expert and author of the book Rules for Rebels: The Science of Victory in Militant History.

Pompeo's outlook "is driven by his support for Israel. Iran poses a major terrorism threat to Israel, much less so the U.S. homeland," he said.

In his remarks, Pompeo also lauded the improvement in relations between Arab states, such as the United Arab Emirates, and Israel. Some in Egypt disputed that.

"In Egypt, we do not really talk about Iran," said Nouran Hassan, 23, a senior studying political science at American University of Cairo who was in the audience. "We don't consider it dangerous. For most ordinary Egyptians, Israel is their enemy ever since the 1950s."

Pompeo's criticism of the Obama administration's "misguided" thinking included its hesitance to use military force and aggressively call out "radical Islam."

"Remember: It was here, here in this very city, another American stood before you," said Pompeo, referring to Obama. "He told you that radical Islamist terrorism does not stem from ideology. He told you 9/11 led my country to abandon its ideals, particularly in the Middle East. He told you that the United States and the Muslim world needed 'a new beginning.' The results of these misjudgments have been dire."

Obama's speech took a stand against the use of "torture" to interrogate terrorism suspects and detention at the prison facility in Guantanamo Bay, Cuba. In terms of calling out radical Islam, Obama's address referred to the problem of "violent extremism" -- a term that has been criticized by Republicans as politically correct.

"[Pompeo's is] a speech shocking for its use of domestic politics, for kind of attacking a prior president in an international setting and for going to a longtime ally and questioning some of the foundations of the relationship with the ally," said Heather Hurlburt, an analyst with the nonpartisan New America think tank. "Those are all things that secretaries of state don't normally do but seem to be becoming standard practice with Pompeo."

Pompeo's remarks prompted an immediate rebuttal from a group of mostly Obama administration officials, who called the address petty.

"That this administration feels the need, nearly a decade later, to take potshots at an effort to identify common ground between the Arab world and the West speaks not only to the Trump administration's pettiness but also to its lack of a strategic vision for America's role in the region and its abdication of America's values," the National Security Action group said in a statement.

Rob Malley, who was Obama's national security council director for the Middle East and is now at the International Crisis Group, said hearing Pompeo's speech was like "like listening to someone from a parallel universe" in which the region's shortcomings were ignored.

"In that parallel universe, the Arab public probably will receive it enthusiastically," he said. "Back on planet earth, they will see it for what it is: a self-congratulatory, delusional depiction of the Trump administration's Middle East policy."

Earlier in the day, Pompeo met with Egyptian President Abdel Fatah el-Sissi, a former general whom Trump has praised but critics have accused of committing human-rights abuses. In his discussions with Egyptian officials, Pompeo said he discussed the need for the el-Sissi government to improve human rights and basic freedoms.

Information for this article was contributed by John Hudso, Sudarsan Raghavan, Karen DeYoung and Carol Morello of The Washington Post; and by Matthew Lee of The Associated Press. 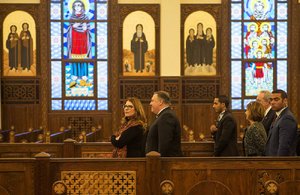 Photo by AP/MOHAMED HOSSAM
Secretary of State Mike Pompeo and his wife, Susan, visit the newly opened Cathedral of the Nativity of Christ north of Cairo on Thursday during his stop in Egypt.