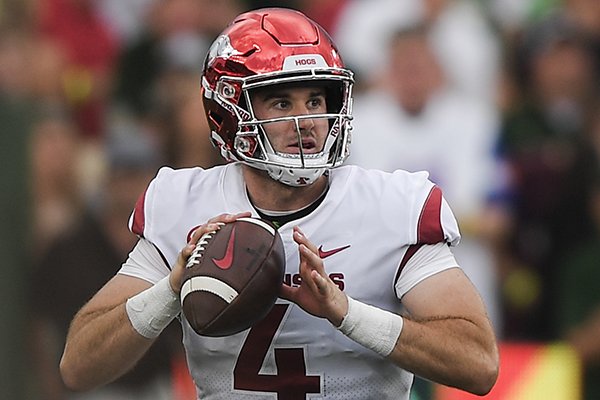 FAYETTEVILLE -- News on the NCAA's transfer portal heated up in SEC country Wednesday when Alabama quarterback Jalen Hurts' intention to transfer became official and Arkansas quarterback Ty Storey was revealed as a fresh listing along with Hurts.

Many college football fans might be aware transfer rules have changed in the last year, but know little else about how and why the portal came about.

The new transfer system is an outgrowth of the push in recent years by the NCAA and member institutions to provide more rights to student-athletes.

In the old system, scholarship athletes had to approach administrators or coaches at their school and ask for permission to contact other schools and be granted a release. An example occurred last spring when backup Alabama center Brandon Kennedy sought permission to transfer and was blocked by Crimson Tide Coach Nick Saban, citing conference rules, from transferring within the SEC, as well as to any of seven other future nonconference opponents, including The Citadel.

"The portal was created when the rule for transfers changed from requiring permission to contact other schools was changed," said Jon Fagg, a University of Arkansas senior associate athletic director. "Previously, student-athletes had to request from the athletic department permission to contact other schools and that request could be granted or denied."

The rule change was devised by the NCAA's Division I transfer working group, adopted by the Division I Council, and went live on Oct. 15 to a hungry audience.

"The first day it went online, the whole thing crashed," said Will Landreth, the UA's director of compliance.

Only employees at NCAA member schools have access to the portal and each school can provide access to coaches at its discretion. A school is required to submit a transfer application to the portal within two business days, but it's a much shorter turnaround at Arkansas.

"I try to put it in within a few minutes," Landreth said. "If I'm at my computer, it takes me a little more than a minute."

As of now, there are more than 3,300 Division I athletes in the portal, including about 1,050 football players, according to a source with knowledge of the system.

Prospective transfers have to sign permission for the release of certain records.

"The student's record in the portal includes the student's academic and athletic history which is managed by the compliance office," Susan S. Peal, NCAA director of governance and national letter of intent, wrote to the Arkansas Democrat-Gazette in an email exchange. "The transfer portal features search navigation, email notifications and integration with other NCAA systems."

Landreth said there has been good communication between athletes and coaches at Arkansas since the new system took effect and there have been no surprise transfer applications to this point.

Landreth pointed out that a prospective transfer's name must be in the portal before the athlete can start having communication of any type with another school, and that skirting the rule is a Level 2 NCAA violation for tampering.

Landreth also said that an athlete's name in the portal does not mean a transfer is definite.

Fagg said the key part to the rule change in his view is the athlete being allowed to have a scholarship offered to them.

"Personally, I think it's a perfectly fine way to handle [transfers]," Fagg said. "They should not have to seek our permission to contact other schools."

The Razorbacks' quarterback room would undergo a major shuffle if Storey elects to transfer. Junior Cole Kelley has already announced his transfer to Southeastern Louisiana.

Redshirt sophomore Daulton Hyatt and true sophomores Connor Noland and John Stephen Jones also are on scholarship, and signee KJ Jefferson is scheduled to to join the team in the summer.

Coach Chad Morris said the program would still have interest in a transfer quarterback.

"Absolutely we're still exploring options to bring an older quarterback in, and we'll see how that goes," Morris said Dec. 19, the first day of the early signing period.