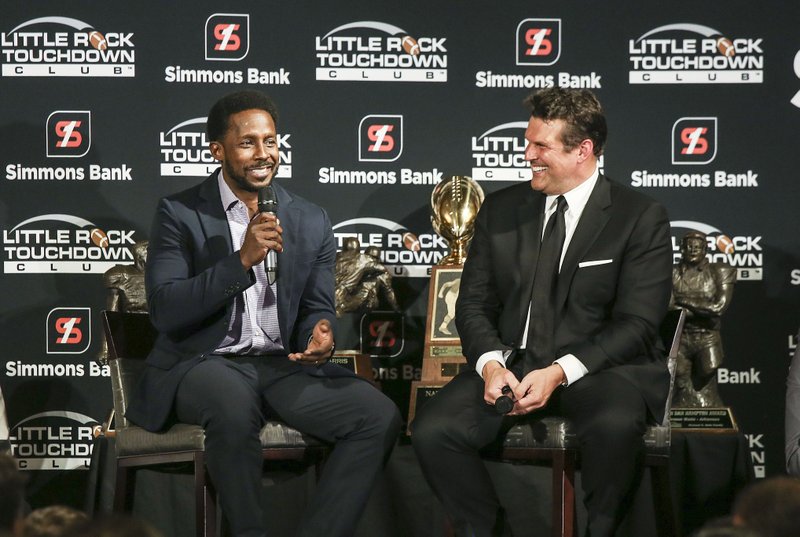 Desmond Howard's 2019 schedule has been a busy one at ESPN.

On Jan. 1, the former Michigan and NFL player-turned college football analyst was at the Rose Bowl in Pasadena, Calif., for the matchup between Ohio State and Washington, won by Ohio State 28-23.

Then, on Thursday, Howard flew from his home in Florida to Little Rock to be the guest speaker at the Little Rock Touchdown Club's season-ending banquet at the Embassy Suites in Little Rock.

"I've had a long week," Howard said. "But this is tremendous. Congratulations to all of the winners."

During his question-and-answer session with Touchdown Club founder and former University of Arkansas football player David Bazzel, Howard, the 1991 Heisman Trophy winner at Michigan and Super Bowl XXXI MVP in January 1997 with the Green Bay Packers discussed his football career as well as his work with ESPN.

Howard's famous 93-yard punt return against Ohio State in 1991, capped by him doing the Heisman Trophy pose, was shown to the Touchdown Club crowd Thursday. Twenty-seven years later, Howard said it was a tremendous moment for him, but admitted that he wasn't supposed to catch the ball since it was inside the 10-yard line.

"When you make that decision, you're vested," said Howard, whose Wolverines won 31-3. "You have to make something happen. Any punt returner who's worth his weight has to make his first guy miss. I made the first guy miss. Listen, these guys tackle me inside the 20, my coach, Gary Moeller, is going to be p*."

His 99-yard kickoff return for the Green Bay Packers against the New England Patriots in Super Bowl XXXI helped give the Packers a 35-21 victory. Howard became the first and still the only special teams player to earn the Super Bowl MVP award.

"My whole goal was to play as hard as I can to get these guys get a ring," said Howard, who cited Brett Favre and Reggie White as then-Packers who had not won a Super Bowl.

When asked to give advice to the players in attendance, Howard said life lessons are a big part of playing the game of football.

"It teaches you hard work, dedication and sacrifice," Howard said.