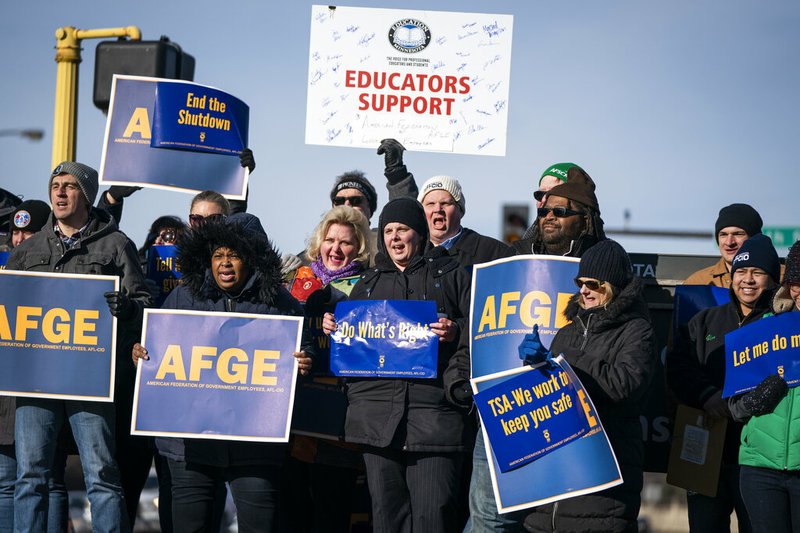 Government workers, American Federation of Government Employees union members and members of supporting local unions, pose for a group photo during the rally to highlight the effect the federal shutdown, Thursday, Jan. 10, 2019, in Minneapolis. (Leila Navidi/Star Tribune via AP)

WASHINGTON -- The partial shutdown of the U.S. government has begun to make it harder to assess the health of the economy by delaying or distorting key reports on growth, spending and hiring.

Government data on home construction and retail sales, for example, won't be released next week because staffers who compile those reports have been furloughed. The retail sales report provides a snapshot of consumer spending, which fuels more than two-thirds of the economy. With Macy's and Kohl's having said Thursday that their holiday sales were weaker than expected, a broader gauge of retail spending would have provided important clarity.

In addition, the next report on the economy's overall growth, set for Jan. 30, won't be released if the shutdown remains in effect. Even if the government has fully reopened by then, federal workers won't likely have had enough time to produce the scheduled report on the nation's gross domestic product.

Not all agencies are closed. Congress approved funding last year for the Labor Department, so the government's next monthly jobs report will be released as scheduled on Feb. 1. But it's unclear how long the department will be able to issue jobs reports -- the most closely watched barometer of the economy -- after that.

Though the economy remains healthy in most respects, there are rising concerns that growth could slow or even stall in coming months. The trade war between the United States and China, which has helped depress global growth, is likely slowing business investment. The stimulus from the Trump administration's tax cuts is expected to fade.

Many economists increasingly see the shutdown, should it persist, as a drag on the economy. Michael Feroli of J.P. Morgan has downgraded his forecast for growth in the first three months of 2019 because of the shutdown. He now expects the economy to grow at a 2 percent annual rate, down from his previous estimate of 2.25 percent.

The shutdown is costing the economy about $1.2 billion a week, according to Standard & Poor's. Some of that loss will be regained after federal workers eventually receive back pay for the time they missed. But many government contractors won't be made whole. And lost business -- such as scheduled hotel stays from trips to national parks that won't be taken -- may not be made up.

Fed officials are now stressing their flexibility on rate hikes, emphasizing that they will be patient and their policy "data dependent." By this, the Fed means that the government's latest readings on hiring, inflation and growth will factor heavily in its rate decisions. Yet much of that data will now be unavailable -- to the Fed or anyone else.

"For us, one of the biggest effects of the shutdown has been around data," Raphael Bostic, president of the Fed's Atlanta regional bank, said Wednesday. "We're worrying about that."

Even some reports that are released on schedule are likely to be distorted by the shutdown. For example, the January jobs report may show an artificially high unemployment rate and low employment figure. That's because up to 380,000 federal employees who aren't working or being paid during the shutdown -- but who will return to work afterward -- could be counted as unemployed for January.

If so, that would raise the unemployment rate by 0.2 percentage point, estimated Ben Herzon, an economist at Macroeconomic Advisers, a forecasting firm. And the monthly job count could decline by 380,000 if the shutdown continues through the end of January, Herzon said. That could push the monthly job figure into negative territory.

If all the federal workers eventually receive back pay, as occurred after previous shutdowns, then the January jobs report would later be revised to restore those 380,000 jobs, according to the Labor Department's Bureau of Labor Statistics.

Future jobs reports could be jeopardized, too, if the government remains shut down. The Census Bureau conducts the monthly surveys that the BLS uses to calculate the unemployment rate. Census is part of the Commerce Department, which remains closed during the shutdown.

The BLS wouldn't say whether data collection will continue beyond January if the shutdown continues.

Other economic reports have already been missed. They include a monthly report on factory orders that was scheduled for Monday. That report typically provides insights into how much U.S. companies are spending on large equipment.

Inflation data will also be affected: The consumer price index was released Friday morning as scheduled, because it was prepared by the Labor Department. But the Fed's preferred inflation gauge is published by Commerce's Bureau of Economic Analysis, which is closed.

And because the Agriculture Department is closed, future reports on wholesale prices and import prices won't include farm-related data, the BLS said Thursday.

A report on the number of people seeking unemployment benefits, considered a nearly real-time reflection of layoffs, is still being published. But it could be distorted by the shutdown: Nearly 5,000 federal employees sought benefits two weeks ago, according to the latest data available, roughly five times the usual figure.

And only a portion of the government's report on productivity, or output per hour worked, will be released Feb. 6, the Labor Department said. That's because that report requires data on the growth of GDP, the broadest measure of the economy.

Even after the government fully reopens, weeks will likely be needed before all the postponed reports can be prepared and released.

"It may take some time to get a 'clean' read on the economy," economists at Bank of America Merrill Lynch said Thursday.

Print Headline: How's the US economy doing? Shutdown makes it harder to say