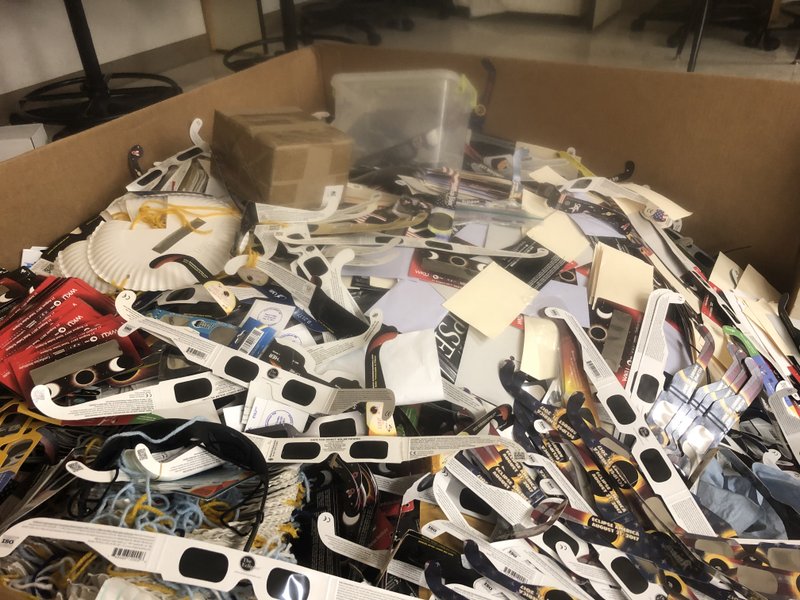 Courtesy Photo Local organizations Explore Scientific in Springdale, Lowell's NWA Space and Bella Vista's Sugar Creek Astronomical Society are partnering with Astronomers Without Borders for a donation of eclipse glasses, and all provide outlets to engage with astronomy in Northwest Arkansas.

Scott Roberts, founder of Springdale's Explore Scientific, had the idea to recycle eclipse glasses from the 2017 Great American Eclipse and send them to South America for the total solar eclipse the continent will experience this year. He expected to gather maybe 50,000 pairs of glasses in the efforts. Then envelopes from all over the country flooded to Northwest Arkansas with two glasses here, three glasses there, boxes from offices and schools containing a couple hundred pairs, boxes from public parks delivering up to 3,000 pairs.

"We've already sorted through and have packaged over 200,000 pairs of glasses. There's 28 more [shipping] pallets to go through. So the estimate is probably that we received a total of 3 million pairs of eclipse glasses," Katherine Auld reveals of the staggering response. Auld is the board chairwoman of NWA Space, a local nonprofit organization dedicated to sharing and demystifying science education. Now she, and the other astronomical entities partnering in the donation, are asking for the community's help.

BONUS — Auld also wants the public to know about the impending total lunar eclipse, taking place around 11 p.m. on Jan. 20. “So everybody should go outside that Sunday night and look up at the sky.”

"We figure we have 2 million more to go, and they need to go on a container ship in the middle of April, so we need to get done with this!" Auld says. "We need the support of the entire community -- and one or two big events where 20 or 50 or 100 people show up and give us 30 minutes, three hours, however much time they want [could accomplish our goal]."

The sort is very simple and comes down to ensuring each pair of glasses displays a manufacturer name that is included on NASA's list of companies who produced a good product -- with thick enough film -- and that the glasses are clean.

"It's not a pipe dream. They're here. We just have to get it done," Auld asserts.

Another ambition Auld had when she got started with NWA Space -- that of building a planetarium in Lowell -- may have seemed like a pipe dream a few years ago, but that goal is moving right along as well. Following their 2017 winning bid on an antique refracting telescope from a college in Philadelphia, NWA Space received approval last year to move forward on the construction of a science center and observatory that will take up 20 acres of Kathleen Johnson Memorial Park.

"What we're hoping is that we become Northwest Arkansas' science version of Crystal Bridges [Museum in Bentonville]. No one knew we needed a mid-America museum for art until there was one," Auld muses. And while space enthusiasts from across the country aren't flocking to Lowell just yet, their eclipse glasses did. And the sorting event will coincide with 100 Hours of Astronomy -- a 100-hour collection of events taking place around-the-clock and around-the-globe.

"The International Astronomical Union is celebrating 100 years, which is cool by itself. The point of 100 Hours of Astronomy is to introduce astronomy to the general public. And to know that somebody else on the other side of the world is also doing something with astronomy, that's going to be so cool," Auld enthuses. "Astronomy has been studied for thousands of generations -- people going outside and looking at the sky. And we find lots of ourselves in the study of the sky. We discover stuff about how we feel about being human. So that's part of the appeal of astronomy is that it's a science that also makes you contemplate life."