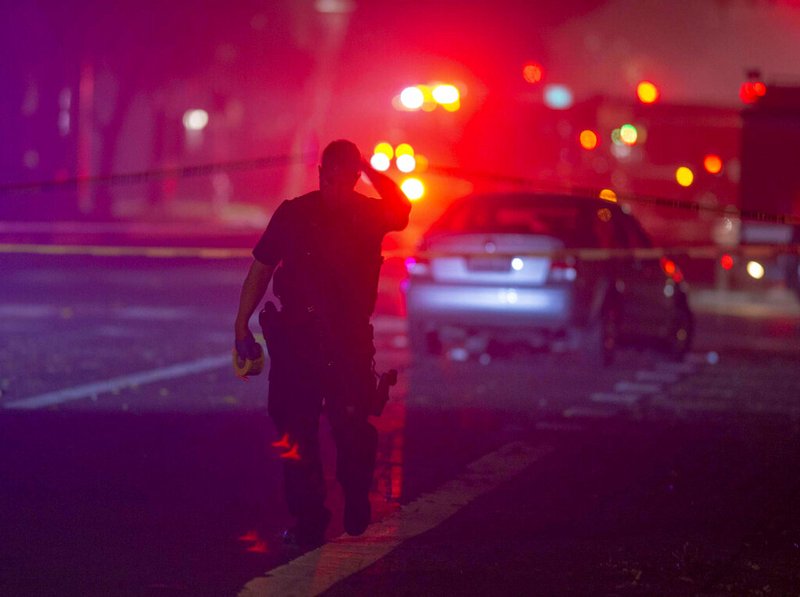 Davis Police closed the area near 5th and C streets in Davis, Calif., after a police officer was shot on Thursday, Jan. 10, 2019. A Davis police officer was shot Thursday night while responding to a traffic accident, and authorities cordoned off parts of downtown while searching for a suspect. (Jose Luis Villegas/The Sacramento Bee via AP)

DAVIS, Calif. -- A 22-year-old police officer on the job only a few weeks was shot and killed by a suspect who opened fire as she was investigating a three-car crash, authorities in Northern California said.

The suspect, who has not been identified, was later found dead inside a home with a self-inflicted gunshot wound following a short standoff with officers, the Davis Police Department said Friday.

Police said Officer Natalie Corona was shot after responding alone to a traffic accident shortly before 7 p.m. Thursday in the city west of Sacramento, a college town home to the University of California, Davis where there has not been a fatal police shooting in nearly 60 years.

Corona was taken to UC Davis Medical Center in Sacramento, where she later died.

Police have not determined what prompted the attack.

Following the shooting, police issued a citywide shelter in place order as officers from throughout the region searched for the suspect. Officers then spent hours trying to coax the suspect out of a home about a block from the shooting scene, using floodlights and commands on loudspeakers for him to emerge with his hands up. At one point they sent in a robot and ignited flash bang grenades, the Sacramento Bee reported.

Officials announced early Friday he had been found dead inside.

The shooting happened on a street lined with mature trees and bordered by churches on both sides. It's up the street from a park where a farmers' market is held on weekends. On Friday, police had closed off several blocks around the area with crime scene tape. Corona's patrol vehicle was towed away on the back of a flatbed truck.

A photograph published by the Williams Pioneer Review shows her father, Merced Corona, pinning her badge at her swearing-in ceremony in August.

Lt. Paul Doroshov, a spokesman for the Davis police department, said the agency hasn't lost an officer in the line of duty since 1959 when officer Douglas Cantrell was killed. The road in front of the police station is named for him.

"This is a community that's not really used to that," he said. "Yolo County in general is a very tight-knit community."

Corona was one of six new officers sworn into the department on Aug. 2.

"She was a rising star in the department," Davis Police Chief Darren Pytel said.

"Natalie was just full of life and full of energy and just an absolute pleasure to be around," Pytel said. "She just worked like you can't believe."

Before she entered the academy, the Davis Police Department ran out of funding for the paid position she had been in. She didn't care; she showed up to work as a volunteer, Pytel said.

Corona is the second officer killed in California in the past two and a half weeks.

Cpl. Ronil Singh, 33, of the Newman Police Department was shot to death Dec. 26 after he stopped a suspected drunk driver.

Gustavo Arriaga Perez, also 33, was charged with the murder. Authorities said Perez Arriaga was in the country illegally and was preparing to flee to Mexico when he was arrested. That killing rekindled a debate over California's sanctuary law that limits cooperation by local officials with federal immigration authorities.