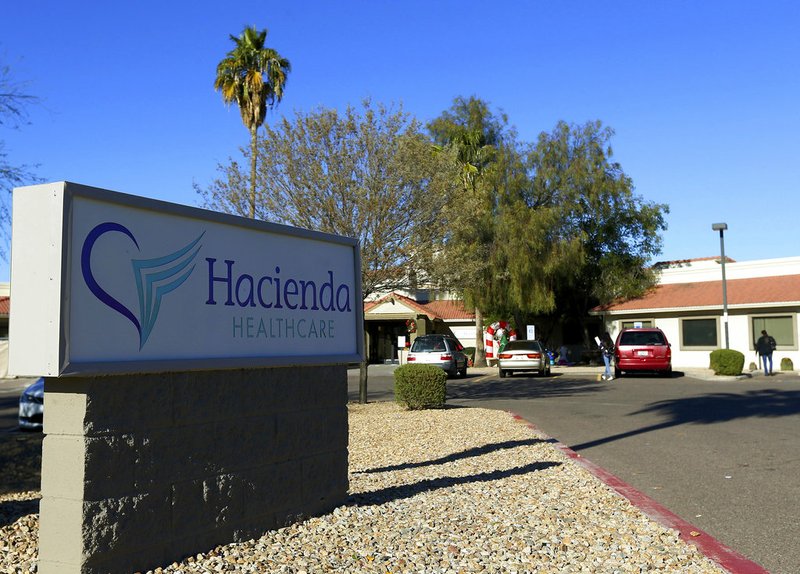 This Friday, Jan. 4, 2019, photo shows Hacienda HealthCare in Phoenix. The revelation that a Phoenix woman in a vegetative state recently gave birth has prompted Hacienda HealthCare CEO Bill Timmons to resign, putting a spotlight on the safety of long-term care settings for patients who are severely disabled or incapacitated. (AP Photo/Ross D. Franklin)

PHOENIX -- Panicking staff members at a long-term care facility scrambled to save a baby born to an Arizona woman in a vegetative state amid their shock to learn she was pregnant, according to dramatic 911 audio released Friday.

"One of our patients just had a baby, and we had no idea she was pregnant," the nurse said.

She then says the mother appeared stable but care workers were administering CPR to the infant, who was still unresponsive. When the dispatcher asked how far along the mother was in her pregnancy, the nurse repeated that it was a shock to everyone.

"This is a complete surprise. We were not expecting this," she said.

Within a few minutes, the nurse expressed relief, saying "thank God" the baby was now breathing and crying.

Since that day, the woman and the baby boy have been recovering at a hospital. Their conditions have not been released.

The 29-year-old woman, who has been incapacitated since age 3, was sexually assaulted, police say, and they are trying to track down the assailant. Investigators are collected DNA from the facility's male employees and anyone else who may have had contact with her.

The revelation that an incapacitated woman was raped inside a care facility has horrified advocates for people with disabilities and the community at large. The CEO of Hacienda HealthCare resigned this week as the provider announced new safety measures, including more than one staff member being present during patient interactions and more scrutiny of visitors.

The facility specializes in providing around-the-clock care for infants, children and young adults with developmental disabilities or who are "medically fragile."

The notion that none of the woman's caregivers knew she was pregnant has drawn skepticism. But medical experts say it's possible she displayed no outward signs that workers would have noticed, especially by staffers who don't work with pregnant patients.

While factors remain unknown, such as how far along she was, someone who is fed the same amount from a tube every day might not show any dramatic changes, like a swollen belly, said Dr. C. Kevin Huls, a clinical assistant professor and maternal-fetal medicine fellowship director at the University of Arizona College of Medicine-Phoenix.

The mother could actually lose weight in other places like her face or arms if a fetus is consuming nutrients, Huls added.

"A good way to understand it is that really, the baby's going to continue to grow even at the expense of the mom's nutrition," Huls said. "So, her weight may not change because she's not taking in additional calories. There may be changes to her body that are going to go undetected in a chronic care condition or at a facility like this."

The woman's mother, who is her legal guardian, is required under state law to submit an annual report that includes results of a physical, according to Maricopa County Superior Court documents. She was examined by a doctor on April 16 who found "no change" in her health during an external exam.

Her family, who are members of the San Carlos Apache tribe in southeastern Arizona, said in a statement through their attorney that they will care for the infant boy and have asked for privacy.