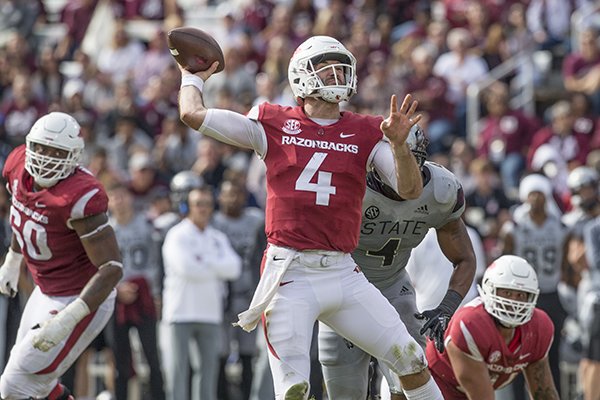 Arkansas quarterback Ty Storey throws a pass during a game against Mississippi State on Saturday, Nov. 17, 2018, in Starkville, Miss. - Photo by Ben Goff

Cubelic, a former Auburn offensive lineman, cited an unidentified source to say Storey is now listed in the portal, a first-year device instituted by the NCAA to help potential transfers seek new schools.

Storey, a Charleston product who would be a fifth-year senior, started nine games last season and completed 143 of 250 passes for 1,584 yards with 11 touchdowns and 10 interceptions.

A player's name in the portal does not mean he cannot return to his school, just that he is exploring transfer options.

If the Razorbacks lose both Storey and junior quarterback Cole Kelley -- who announced earlier this month that he was transferring to Southeastern Louisiana -- the only quarterback on the roster with significant returning experience would be sophomore Connor Noland, who started Arkansas' 23-0 victory over Tulsa. Noland completed 21 of 42 passes for 255 yards, with 1 touchdown and 2 interceptions in 2018.