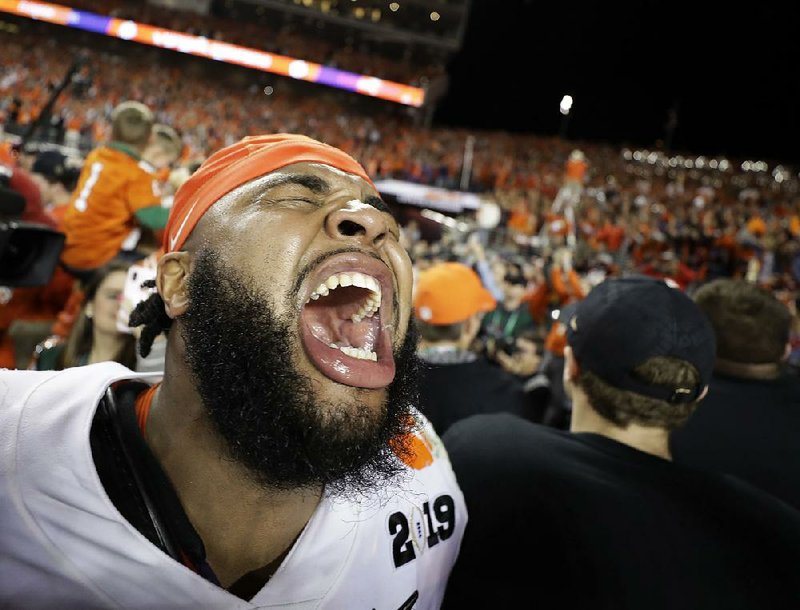 Trevor Lawrence passed for 347 yards and three touchdowns, and the second-ranked Tigers beat No. 1 Alabama 44-16 on Monday night in the College Football Playoff national championship game.

In the fourth consecutive playoff meeting between the Tigers and Tide, Clemson evened the series and beat Alabama for the national championship for the second time in three seasons.

Clemson is the first team in the AP poll era, dating back to 1936, to finish 15-0, and the first since the playoff started five seasons ago to get through a season unscathed.

"We're gonna enjoy this one. We've got a nice spot to put it in our facility, right next to that other one," Clemson Coach Dabo Swinney said. "We've got twins!"

Alabama coach Nick Saban and the Tide (14-1) were looking for a sixth national championship in 10 years, trying to add to an already unprecedented run in the sport. Instead, Clemson crushed Alabama, becoming the first opponent to beat the Tide by more than 14 points since Saban became coach in 2007. It was the sixth time in 167 games at Alabama that the Tide were beaten by 10 or more points. 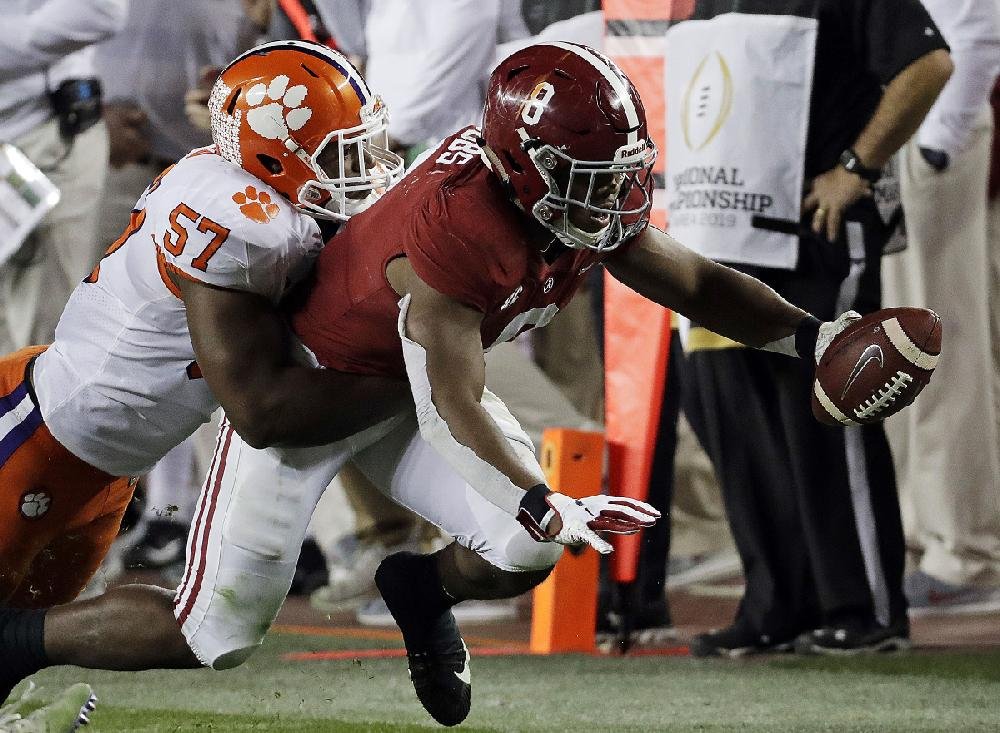 Clemson’s Tre Lamar stops Ala- bama’s Josh Jacobs during the second half.

"We're 15-0, we beat the best team ever, nobody's taking that away from us," Clemson All-America defensive tackle Christian Wilkins said.

Lawrence cut through Alabama's defense with the help of another fabulous freshman. Justyn Ross made a juggling grab, a one-handed snare and broke a 74-yard touchdown about midway through the third quarter that made it 37-16 and had Swinney high-stepping down the sidelines.

Ross, who scored 2 touchdowns in the semifinal rout of Notre Dame, had 6 catches for 153 yards against his home-state team.

Alabama's Tua Tagovailoa threw two crucial interceptions in the first half, the first returned 44 yards for a touchdown by A.J. Terrell to put Clemson up 7-0. The Tide came in scoring 48 points per game and winning by 31 points per game, but they were shut out over the final 44 minutes by an opportunistic Clemson defense that stiffened in key spots after falling behind 16-14 in the second quarter.

Saban lamented numerous mistakes: blown coverages on third down (Clemson was 10 for 15), stall outs in the red zone and special-teams blunders, including a fake field goal that flopped on the first possession of the second half.

He laid the blame on himself. The Alabama program has set a championship-or-bust standard under Saban, but he didn't want this season looked at as a failure.

"One game doesn't define who you are," Saban said.

Tagovailoa, the sophomore who came off the bench to win the championship game last year for the Tide, went 22 for 34 for 295 yards and 2 touchdowns.

The Heisman runner-up was also the second-best quarterback on the field in the championship game. Lawrence finished 20 for 32, and went 18 for 25 for 277 yards over the final three quarters.

The teenager who took over as the starter four games into the season raised the Tigers' play, giving them an explosive offense to match a suffocating defense, led by All-American linemen Clelin Ferrell and Wilkins.

"It's been an awesome journey," Lawrence said. "It's really unbelievable."

Clemson hit Alabama with a 31-point first half, capitalizing on the Tide's mistakes and unleashing Lawrence's rocket arm. 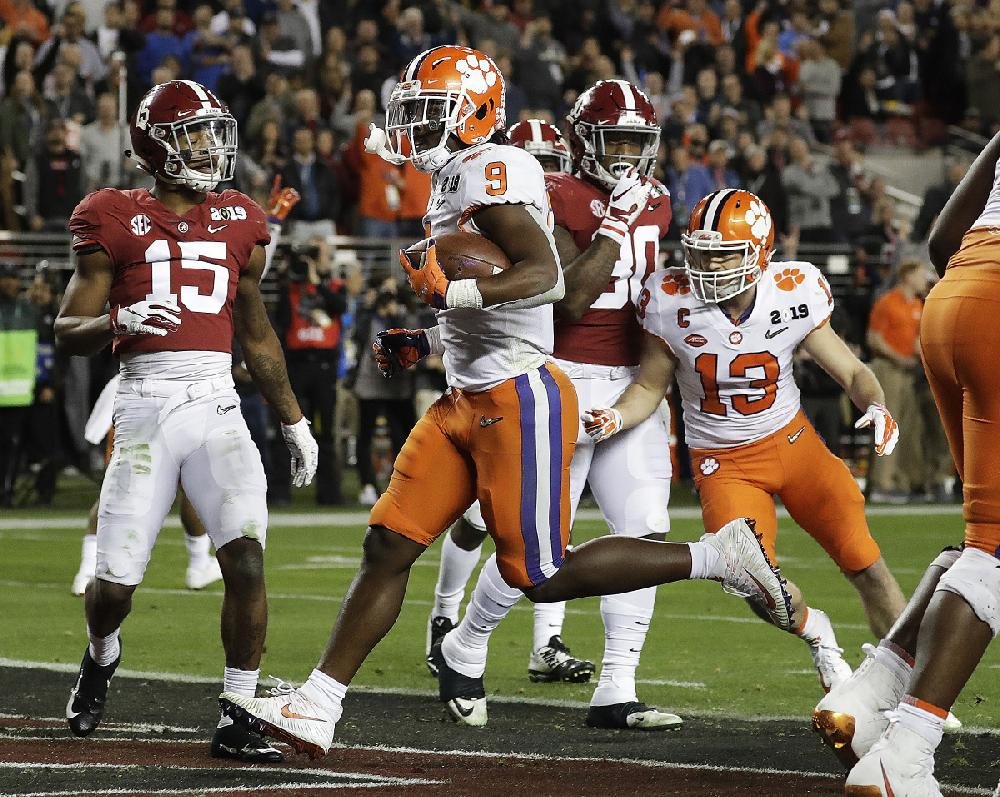 Clemson’s Travis Etienne scores one of his three first-half touchdowns. Etienne had 86 yards rushing and 2 touchdowns, and caught a 5-yard pass for another score.

Tagovailoa threw a second interception in the second quarter, this time into triple coverage, and Trayvon Mullen's 46-yard return put Clemson in Alabama territory. That led to Travis Etienne's third touchdown of the half, a 5-yard shovel pass from Lawrence.

With a chance to stamp itself as the best team in Saban's 12 seasons at Alabama, the Crimson Tide played maybe the worst half of the coach's tenure. The 15-point halftime deficit was the largest the Tide have faced under Saban.

Alabama ran the fake field goal into a waiting Clemson defense instead of kicking from 40 yards out. Three plays later, Lawrence faced down a pass rush and slung a pass to Ross, who was alone after Alabama defensive back Savion Smith went down with an apparent leg injury.

"We're just little old Clemson, and I'm not supposed to be here," said Swinney, the former walk-on at Alabama and receivers coach at Clemson who now has as many national titles as Hall of Famers Bobby Bowden and Joe Paterno. "But we are here and I am here. How about them Tigers." 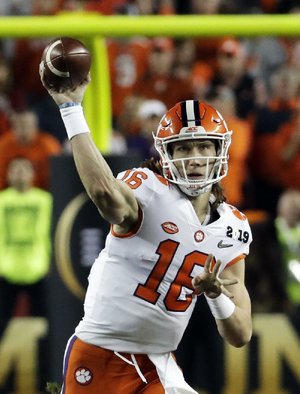 Photo by AP/CHRIS CARLSON
Clemson quarterback Trevor Lawrence threw for 347 yards, including 197 in the first half.