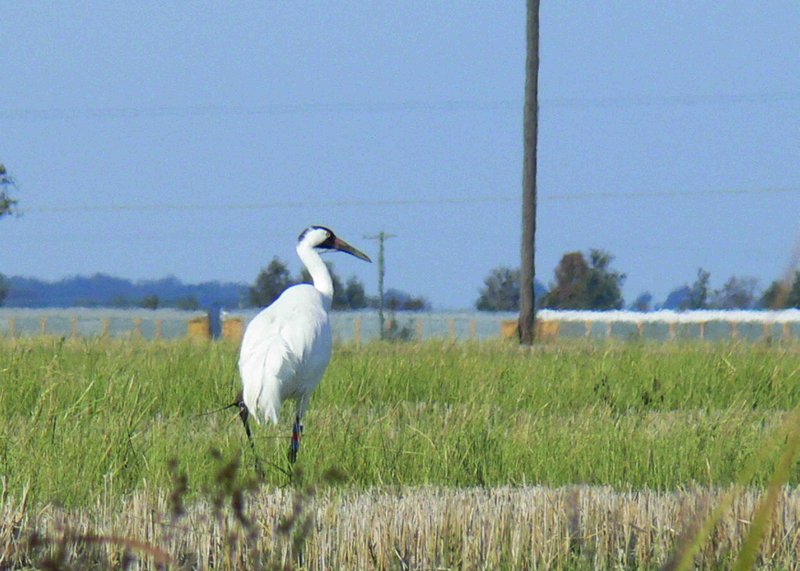 The whooping crane L4-17 stalks about in a rice field near Roe in Monroe County in November. The crane left the area Dec. 15 or 16 and was later seen in a refuge in Alabama. (Special to the Democrat-Gazette/JERRY BUTLER)

As Arkansas birders in general enjoy their annual season of eagle-watching hikes and cruises, a lucky few are thinking back to a very different and even larger bird that unexpectedly staged its own semiprivate watching party in 2018.

In October, an adult female whooping crane was regularly seen and photographed in rice fields of Monroe County.

It had been foraging along the Arkansas River for weeks before more than a very few knew it was anywhere about. Nature lovers and birdwatchers who read about the whooper on the group email list called ARBird-L flocked to get a peek at the tall, white, scientifically monitored crane.

Whooping cranes are named for their resonant call, which can be heard over great distances thanks to an extra-long trachea that coils around the bird's breastbone twice like a French horn.

About 5 feet tall and with a 7½-foot wingspan, they once ranged over most of North America, including Arkansas; but today they are considered a well-established wild bird only at Aransas National Wildlife Refuge in Texas, at their summer nesting grounds in Wood Buffalo National Park in Canada and along their migratory flyway.

Efforts to re-establish other colonies of whooping cranes in Louisiana and Florida have had modest results.

They reside in marshy areas where they feed on crustaceans, aquatic animals, berries and fruits.

The presence of the crane, the tallest and one of the rarest of all North American birds, in fields near the community of Roe became known by Internet-savvy birding enthusiasts only after Karen Rowe, bird conservation coordinator of the Arkansas Game and Fish Commission, posted about it Nov. 6 on ARBird.

Rowe reported that the bird was on private land in a rice field in the northeastern corner of the intersection of Arkansas 33 and Arkansas 366. Designated L4-17, the female whooping crane was from the experimental whooping crane population established in coastal Louisiana — a nonmigrating group.

The crane was banded and wearing a transmitter that tracks its movements. Dubbing the crane "our wandering female," the Louisiana Department of Wildlife and Fisheries — Whooping Cranes page on Facebook posts maps showing its long solitary rambles — beginning two days after its release into the White Lake Wildlife Conservation Area in 2017. It has traveled into Alabama, across Texas to Oklahoma and now, from Oklahoma to Arkansas to Alabama again.

The crane arrived in western Monroe County between Roe and Aberdeen in late October after spending several weeks along the Arkansas River in western Arkansas. Rowe wrote that the crane had spent most of the summer in eastern Oklahoma.

TO TELL OR NOT TO TELL

There was debate among birders about whether the location of the bird ought to be publicized. In other places, the specific site of whooping cranes that are being re-introduced is kept secret. But as Rowe explained to ARBird on Nov. 7:

"With deer season opening ... it was thought that the crane was safer with many eyes as well as binoculars, spotting scopes and photographers' lens on it, than if its location were just known to locals," she wrote. "It is highly visible from the road but very wary of humans."

She added that everybody in the county, from ethical hunters to ne'er-do-wells, appeared to be aware of the bird.

Rowe reported that during a brief visit to the area, she spoke to people in eight cars and trucks. The people told her they were glad there were extra eyes to watch over "their" big white bird. "The landowner, his farm hands and county officers regularly patrol the bird's area both during the day, dusk, dawn and at night," Rowe wrote.

The whooping crane is a federally protected, endangered species. The Audubon Society considers the species at risk of becoming threatened or endangered without conservation action. The North American Waterbird Conservation Plan rates the species at 16 out of 20 on the Continental Concern Score, and lists whoopers as a Species of High Concern.

Thanks to intensive conservation efforts, its population has grown from a low of 21 or 22 individual birds in 1941 to about 600 individuals in 2011 (with about 160 of those in captivity).

According to Ed Bronikowski, senior curator at the Smithsonian National Zoo, "their remarkable population recovery and subsequent reintroduction is one of the greatest conservation stories in North America."

Yet despite progress, collisions with fences and powerlines, illegal hunting, predators, disease and polluted waterways continue to threaten the whooping crane.

On Christmas Day, Rowe informed the group email list that the whooper had left the area Dec. 15 or 16. From the Monroe County rice fields she spent nine days in Arkansas County near the Bayou Meto Wildlife Management Area at Brewer Bottoms. Then came a few days on duck club property in that area.

"On the Eve of Christmas Eve, L4-17 headed east, leaving Arkansas," Rowe wrote. She landed at a refuge in Alabama that was hosting a flock of sandhill cranes and several other whooping cranes from the experimental eastern population that migrates between Florida and Wisconsin.

"I know many hunters and birders will miss her," Rowe wrote. "Also many of us are relieved that her visit to Arkansas was a safe one."

OFF TO SEE THE WHOOPER

I first went to see the whooping crane Nov. 16. No sightings had been reported for two days before my trip. Three inches of snow had fallen in the county. I feared the weather might have forced the bird into cover elsewhere.

I was also concerned about duck season opening on the 17th. There would be sounds like the start of a young war when the sun came up.

The bird had chosen to stay fewer than 20 miles from the epicenter of duck-hunting, the duck capital of the world, Stuttgart. An undisciplined hunter, or a hunter mistaking the crane for a snow goose could end everyone's chances of seeing the stately crane alive.

As I drove south out of Des Arc, snow remained in thickly shaded areas and upon the north-facing roofs of unoccupied houses and barns. It was an hour drive from North Little Rock. It could have taken less time had I not stopped to watch a red-shouldered hawk dive into a thicket to catch a cotton rat.

I arrived at the rice field northeast of the intersection of Arkansas 33 and Arkansas 366 about 10:30 a.m. and immediately spotted the crane. It was grazing in deep vegetation in a roadside ditch. 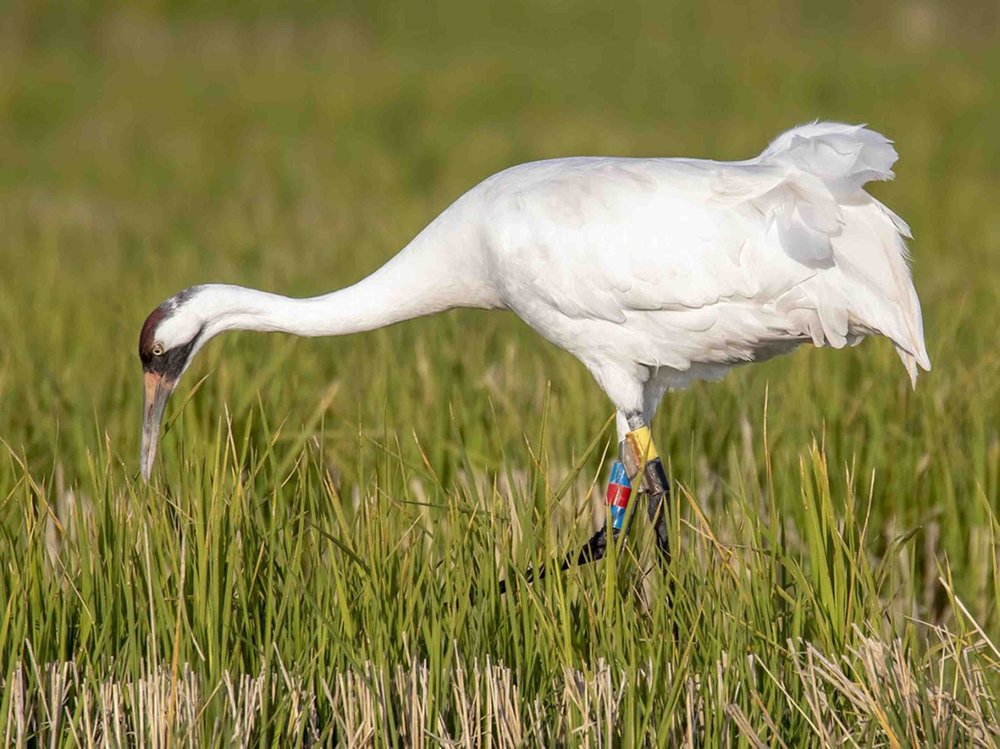 Seen through a long-range camera lens, the whooping crane L4-17 wears a yellow transmitter and red and blue ID bands. (Special to the Democrat-Gazette/DELOS McCAULEY)

I drove as close as I dared, then eased out of the car to walk only a little closer for a photograph. As I got out of the car, the crane moved cautiously to my left, but not away. Its movements were not hurried, it seemed uncomfortable with my nearness but not frightened. If it had acted startled, I would have moved away.

It spent a good deal of its time ignoring me, grazing with its head down into the rice stubble. Other times it would extend its long legs and raise its neck as if to scan its surroundings. Once I was no more than 20 yards away, close enough that my unassisted eyes could see the aqua and red bands and the yellow transmitter.

Though it gradually sauntered away, several times it took steps in my direction.

After about 10 minutes it began steadily moving farther from me at a faster pace to the north, into the middle of the field. It became a mere white blob in my binoculars. Then it headed east into a marsh, where it disturbed two great blue herons.

Moving a bit more quickly, it turned south, looping closer to me, toward Arkansas 366. And then it paused in a water-filled ditch. There it remained for a while, hanging out with another white bird, a great egret.

With the egret in tow, it headed closer to the road and appeared to be about to cross. A tan SUV was speeding toward it. I feared I might witness a collision. But the driver slowed and eased to a stop as the crane unhurriedly raised its white wings, revealing black feathers near the wing tips, and took flight.

With a few leisurely flaps it glided slowly and lowly back into the marsh but not out of sight. The egret followed.

Shortly after I arrived, I saw crane L4-17 squeeze a yellow object between the tips of its long upper and lower beak. Before I left for home, I returned to the place and found many small yellow fruits, like what I saw the crane eating. They were about the size and color of a lemon and had the outward texture of a tomato. 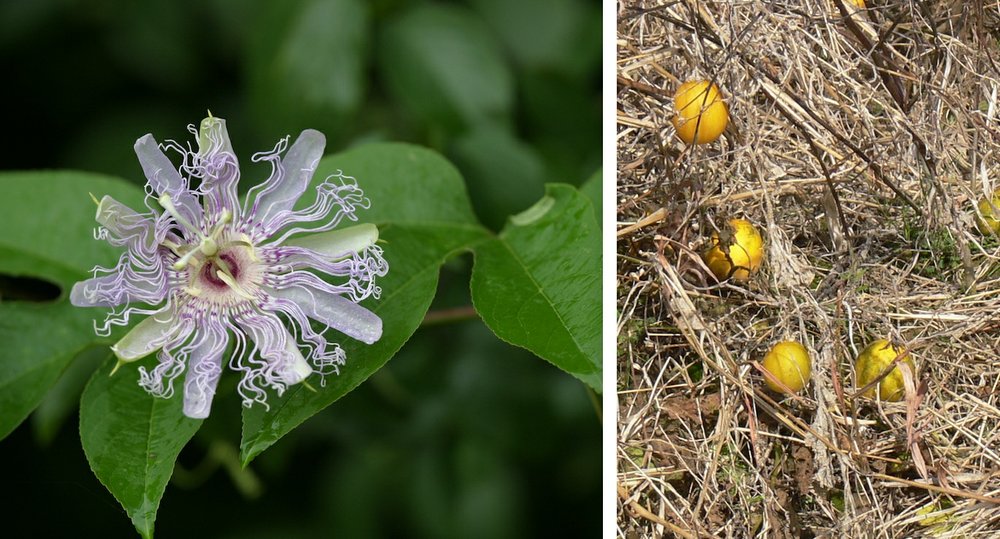 The passion flower vine (left) produces yellow fruits about the size of lemons (right). (Special to the Democrat-Gazette/JERRY BUTLER)

Later, I learned from Eric Sundell, emeritus professor of biology at the University of Arkansas at Monticello, that they were the fruits of the passion flower. On a subsequent visit to see the crane, I cut one of these fruits open and tasted it. The flavor reminded me of a citrusy green apple. These vines were in great abundance in the ditch banks on the south and eastern sides of the field, and I have conjectured that they may be one of the factors that attracted the crane to this particular field.

A FLOCK OF BIRDERS

During the hour and a half that I watched the crane, three other birders joined me: Nancy Young from Grant County, Edward Tiede from Greenbrier and Gary Hickerson from Searcy. We had all learned of the whooper through ARBird.

Two local men who were just returning from deer hunting (one a plumber who lives nearby, and the other man with a sheriff's emblem on the door of his pickup) also stopped to look at the crane. They seemed to enjoy the bits of information I shared with them about the bird, its rarity and recent history. Both indicated they would keep an eye out for it.

I visited Roe again Dec. 3 and saw the crane was not feeding in the same field, but in one a short distance away to the southeast. I only got a distant view, but she was still in the company of a great egret.

After I watched about 20 minutes, she was startled by some varmint in the rice stubble, squawked out a "whoop," flew high into the sky and sailed, coasting, back to the field where I had seen her first.

It was a rare treat, shared ethically and appreciatively among dozens of other birdwatchers, nature lovers and locals who made a point to see "the wonderful whooper of Roe."

Jerry Butler writes regularly about Arkansas birds and the people who enjoy them. He welcomes your comments at

Print Headline: Wayward whooping crane pays a visit to parts of Arkansas, to the delight of birdwatchers