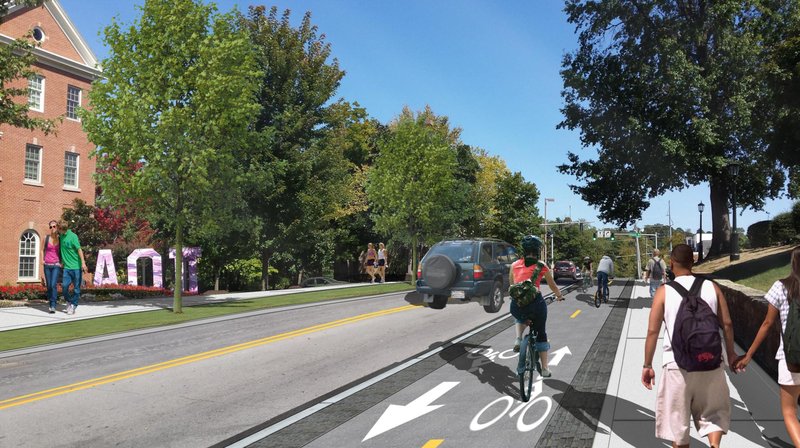 FAYETTEVILLE -- It looks like Maple Street will get on the straight and narrow path.

The city and university have partnered to put a two-way bicycle lane on the south side of the street. The lane, referred to as a cycle track, will stretch from the Razorback Greenway near Gregg Avenue about 10 blocks west to Garland Avenue.

Along with it will be new sidewalks on both sides, modified traffic signals and some side streets becoming one-way. Most of the turning lanes and parking spaces on the street that prompt cars to weave a bit from one side to another will disappear.

The idea sparked a few years ago after city and university officials decided Maple Street was due for an upgrade. The Northwest Arkansas Regional Planning Commission included Maple Street on its bicycle and pedestrian master plan, and the university included it on a planned campus-wide bicycle circuit.

The Walton Family Foundation took notice. The university applied for a matching grant to pay for the cycle track's design, and the city helped split the cost. Each entity agreed last fall to put in $103,500, with the foundation covering the other half, bringing the total design cost to $414,000.

Mike Johnson, associate vice chancellor of facilities for the university, said the project represents a true partnership. He likened the effort to the city and university partnership that brought a bike-share program, VeoRide, to fruition.

"Our goal has always been to kind of push cars away from the campus core and make it more pedestrian- and alternative-means-of-transportation-friendly," he said. "Walkers, joggers, bikers -- I think this is all consistent."

Alta Planning+Design and Olsson and Associates -- formerly McGoodwin, Williams and Yates -- have been working on the concepts and design. The city's active transportation and transportation committees saw initial renderings in the fall.

A key step will be figuring out how to keep traffic flowing once the final design is turned in and construction begins, tentatively slated over this summer and next, said Chris Brown, city engineer.

"We talked about breaking it into two sections -- doing one block at a time or trying to do one side of the road or the other," he said. "There are still a lot of logistics as far as construction that we just don't know yet."

For instance, the consultants did a traffic study and recommended ways to divert car traffic from Maple Street. Whitham, Oakland and Lindell avenues could become one-way going north, letting cars get off Maple Street through those roads but keeping them from coming in. A signal could go up at Gregg Avenue. Turn lanes at Lindell and Leverett avenues would be removed. Taking out the on-street parking spaces would make room for the cycle track and sidewalk.

The right turn from the eastbound lane of Maple Street onto Arkansas Avenue heading south likely will stay. However, having the cycle track run through there without posing a danger to pedestrians and bicyclists could be tricky, said Matt Mihalevich, trails coordinator for the city. Some type of signal preventing right turns likely would be needed, he said.

The elevated cycle track, made of different material from the road, will serve as a safer way for bicyclists to get around, Mihalevich said. Keeping the different modes separate reduces the risk of conflict, as opposed to painting a bike lane on the street, he said.

Plus, the cycle track will connect directly to the Razorback Greenway, Mihalevich said.

"A big component is connecting all of the students with our trail system, and that's exactly what this does," he said.

Street lanes for cars would be 11 feet wide consistently. Right now, street width varies. The cycle track would be 12½ feet wide, with each sidewalk 8 feet wide. 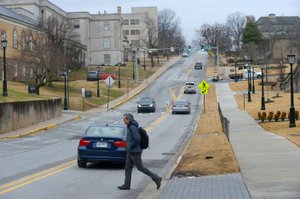 NWA Democrat-Gazette/ANDY SHUPE A pedestrian crosses Maple Street Thursday on the University of Arkansas campus in Fayetteville. The city of Fayetteville and University of Arkansas are planning to install a two-way bicycle track on Maple Street from the Razorback Greenway near Gregg Avenue to Garland Avenue. Estimated cost on the project is $4 million.

Jenny O'Connell, with the National Association of City Transportation Officials, said cycle tracks are not a new concept but more cities nationwide are adopting them. Cities such as New York and Portland have robust networks of protected bike lanes, she said, while others are just starting out.

Separating bicyclists from cars puts users of both at ease, O'Connell said. In addition to improved safety, the bicycle-exclusive feature often attracts riders who otherwise would opt to get around in a car, she said.

"Cycle tracks are becoming common all over the country, sometimes in cities or on streets with a very car-oriented reputation," O'Connell said.

Construction is estimated at $4 million. The city will apply for a matching grant with the Walton Family Foundation, and the university will chip in.

The city plans to use $1 million in bond money, if approved by voters in April, for its portion. The university would put in $1 million, with the grant covering the rest.

The university also will pay for its specific features, such as new lighting and the different kind of concrete used for the senior walk.

The fine details may change between now and when construction starts, but the central idea will stay the same, Johnson said.

The planned cycle track on Maple Street is set to be designed accordingly: