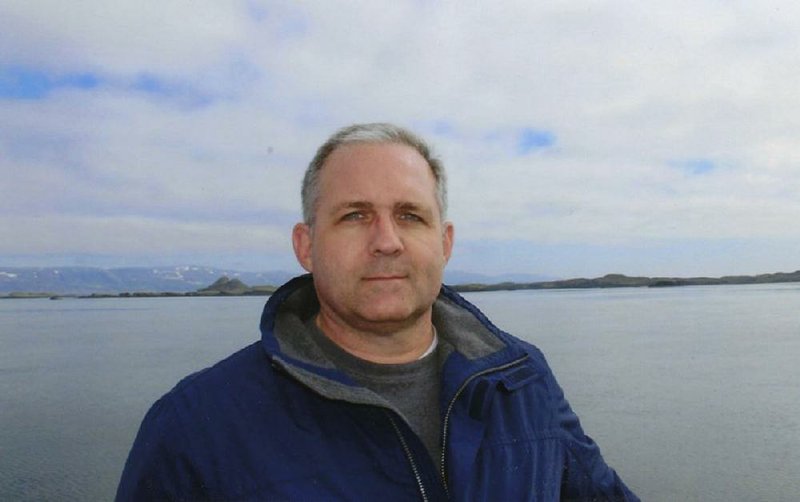 This undated photo provided by the Whelan family shows Paul Whelan in Iceland. Whelan, a former U.S. Marine arrested in Russia on espionage charges, was visiting Moscow over the holidays to attend a wedding when he suddenly disappeared, his brother said Tuesday, Jan. 1, 2019.

MOSCOW -- Russia on Saturday downplayed the possibility of swapping an American detained on espionage charges for a Russian behind bars in the United States.

Adding another wrinkle to the complex situation of Russia and the United States detaining each other's citizens -- including the mysterious arrest of American Paul Whelan last month in Moscow -- it was revealed Saturday that a Russian citizen was arrested in December in the Northern Mariana Islands and transferred to Florida.

An FBI spokesman declined to comment on the arrest of Dmitry Makarenko on Dec. 29, which Russia's Foreign Ministry disclosed.

U.S. court records show Makarenko, who lives in Russia, was indicted in Miami in 2017 on charges he broke American laws against exporting military equipment. He also was charged with money laundering. A Justice Department spokesman declined to comment on the case.

There has been widespread speculation that Whelan, who was arrested on Dec. 28 under the relatively broad charge of espionage with no details on what he is accused of doing, would be exchanged for a Russian citizen.

Whelan's arrest occurred weeks after Russian citizen Maria Butina, 30, pleaded guilty in a U.S. court to acting as an agent for the Kremlin in conspiring with a senior Russian official to infiltrate conservative American circles ahead of the 2016 presidential campaign.

"As to the possibility of exchanges of one sort or another, it's impossible and incorrect to consider the question now when an official charge hasn't even been presented," Ryabkov was quoted as saying by the state-run RIA news agency.

"Charges will be presented in the near future," he said, according to the Interfax agency.

Some Russian news reports earlier cited unnamed sources as saying Whelan had been indicted on espionage charges that carry a possible prison sentence of 20 years.

Officials haven't given details of Whelan's suspected activities and he was initially identified only as an American. His concurrent Canadian, British and Irish citizenships became known on Friday.

Whelan works as the global security director for a U.S. automobile parts manufacturer and lives in Michigan. He was court-martialed and discharged from the Marines in 2008 for trying to steal thousands of dollars from the U.S. government.

Whelan's case, which continues to zigzag as details about his past emerge , has further heightened tensions between Washington and Moscow: The United States and Russia are at loggerheads over a range of issues including election interference and the crises in Syria and Ukraine.

The Russian Embassy in Washington found out about Makarenko's detention from those close to him, not the U.S. government, violating the Vienna Convention provision that requires notification within 72 hours of the arrest of a foreigner. "This is not the first time the US does this," the Foreign Ministry said in a statement. "The United States' neglect of its international obligations has become the norm."

Konstantin Kosachev, head of the international affairs committee of the upper house of the Russian parliament, said Makarenko's arrest was "the latest attack on a citizen of Russia outside the frame work of international law," Interfax reported.

Five days passed before Whelan was visited by U.S. government officials. The U.S. ambassador to Russia, Jon Huntsman, met with Whelan on Wednesday in his cell at a Moscow jail. Neither Washington nor Moscow has provided a reason for the delay in that meeting.

Russia's security services arrested Whelan when he was in Moscow on a personal visit, his family and company have said.

U.S. Secretary of State Mike Pompeo said Washington would demand his release if his detention is deemed inappropriate, while Great Britain has said its citizens should not be used as pawns.

Whelan has spent more than a decade cultivating friends and contacts throughout Russia, most often through a social networking site that is similar to Facebook and popular largely in Russia.

Several of those contacts said that the American never seemed sinister, merely someone who was interested in Russia and wanted to be pen pals.

"I know him as a friendly, polite, educated and easygoing guy," said one of his contacts, who, like other Russians interviewed, spoke on condition of anonymity because of Whelan's legal troubles.

Whelan has collected dozens of contacts on the social media site, nearly all of them men, many of whom have at least some connection to the military.

Family members said he was only a tourist. In a Washington Post opinion piece published Friday, his twin brother, David, urged the U.S. government to pressure Russia to release him.

"Paul is a kind and considerate brother, son and uncle, and a generous and loyal friend," he wrote. "He travels as often as he can, both for work and pleasure. He is many things to many people, but he is not a spy."

Whelan has been visiting Russia since at least 2007, when he took advantage of a military program for Marines deployed in Iraq that gave them 15 days of leave and paid for the travel.

Some of Whelan's Russian contacts said they met him online in 2006 and became "pen pals," trading practice in English for Russian. Whelan seemed fascinated with Russia and its culture, they said.

For nearly a decade, he has had an account on VKontakte, which means In Contact. Of his 58 friends at the time of his arrest, 54 were men. Many attended universities affiliated with the military, civil aviation or technical studies. Many share his interest in sports and firearms.

"We was guys with guns," wrote another of his friends, who said he was a student working nights as a security guard when he first met Whelan online.

The men, who live in separate Russian cities far from Moscow, said they first met Whelan in person in 2008 when he traveled around the country to meet some of his new friends. Others said they have only communicated online.

One of Paul Whelan's friends on VKontakte said he believed the arrest was a mistake because a true spy would never act as openly as he did. He said Whelan gave him his home address and they exchanged Christmas cards.

Information for this article was contributed by Amie Ferris-Rotman and Devlin Barrett of The Washington Post; and by Jim Heintz, Lynn Berry and Deb Riechmann of The Associated Press.