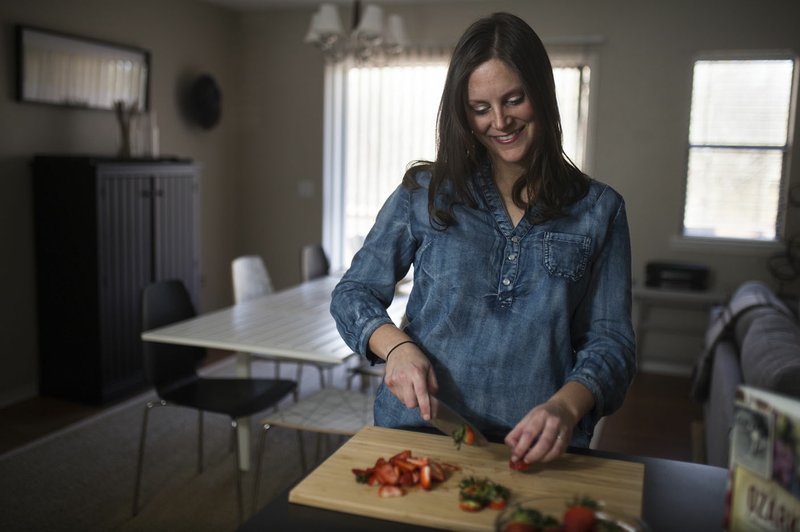 Growing up in Siloam Springs, Erin Rowe was raised to be artistic -- but she had to find her own unique outlet for her creativity.

"My dad was a musician. My sister's a musician. My mom had been a home ec teacher, so I naturally gravitated toward some of those -- would you call them 'domestic arts'? A family friend suggested cooking, and it didn't feel like something grueling. And I like to eat."

WHERE — Crystal Bridges Museum in Bentonville

BONUS — In addition to Rowe’s talk, participants will be able to enjoy some of her recipes created by Crystal Bridges chefs.

Rowe says she was self-taught in the kitchen, then corrects herself. Everything she learned as a beginner, she says, came from working her way through Irma S. Rombauer's "Joy of Cooking." It went with her even on her travels around the world -- and when she talked herself out of taking the soup-spotted, breadcrumb-filled, dog-eared, duct-taped volume with her, she'd end up asking someone to mail it to her.

Still, "I had no idea God would bless me with the ability to be a creative cook," the Bella Vista resident says.

Rowe graduated from Hendrix College in Conway armed with a degree in psychology, an adventurous spirit honed by mission trips in high school to places like Scotland, England and Mexico and the idea that she wanted to see the world before she settled down. Unlike her classmates, who were headed toward law school or medical school, Rowe applied to the Peace Corps. It took two years to get in, but finally, she was on her way to St. Lucia in the Eastern Caribbean for training.

"I know, it sounds like paradise," she says. "But on the other side of the island, away from the nice hotels, it was very Third World."

She was then stationed on Dominica, which she says she's heard compared to Hawaii before it was settled -- "really gorgeous, but primitive." Still, she was able to pursue her studies in culture via food, because Dominica was settled by the French. "I was introduced to French cooking there."

Eventually, Rowe ended up in Maui, Hawaii, to attend culinary school -- and the course of her life was set. She was good enough, she remembers, that her instructors let her skip ahead from beginner to advanced, but she also recalls mistakes that make her cringe to this day. For instance, one day, the class was sent off with the assignment of making a balsamic reduction -- and Rowe thought she knew how.

She's also learned how to take her extroverted personality, her passion for food and an entrepreneurial spirit and turn the combination into a career. Having moved back to Northwest Arkansas to go to graduate school -- but not winning a scholarship to do so -- Rowe decided she "wanted to write a book, because somebody needed to write down our culinary history so we wouldn't lose it."

The result was "An Ozark Culinary History: Northwest Arkansas Traditions From Corn Dodgers to Squirrel Meatloaf," released in 2017 by American Palate in Charleston, S.C. It gave her the street credentials to put together a "nonconventional" life of teaching cooking classes, consulting with restaurants, speaking, catering and occasionally completely revamping a menu, like she did last summer for Savoy Tea Company. In addition to creating four seasonal menus -- and a wealth of options for gourmet French toast -- Rowe figured out how to turn tea into syrups, bringing diners back around to the reason Savoy exists.

"I ended up making about 12 tea syrups that they use and are starting to bottle," she says proudly. "It took a lot of trial and error, but it was really fun."

Of course, she still does book signings, but Rowe's next endeavor is set for Jan. 16, when she introduces a new Crystal Bridges series called "High South Moments." And after that?

"I'm thinking about doing culinary food tours of Northwest Arkansas," she says, "a lunch or dinner experience with a little history, a little art, some culture, talk about what's happening here now.

"It's not your typical 9 to 5 job, but the creative in me really thrives on it." 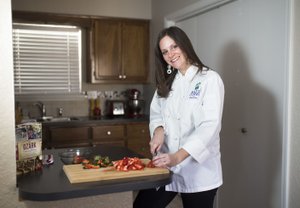 File Photo/CHARLIE KAIJO Erin Rowe learned to cook by working her way through "Joy of Cooking," then studied at Maui Culinary Academy in Hawaii before coming home to the Ozarks.

Print Headline: Getting Creative With Cuisine